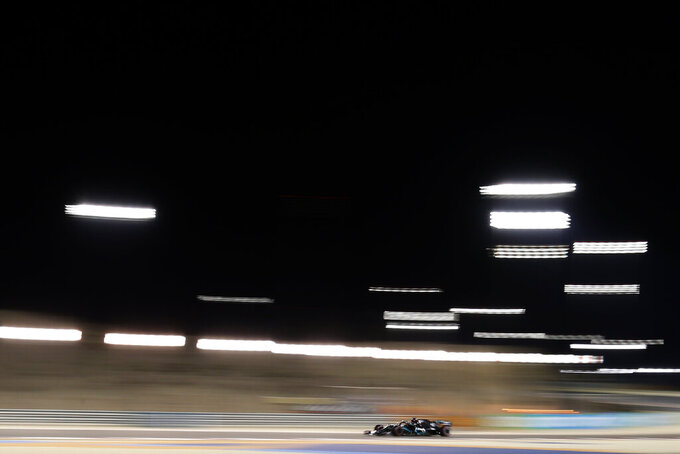 Mercedes driver George Russell of Britain steers his car during the first free practice at the Formula One Bahrain International Circuit in Sakhir, Bahrain, Friday, Dec. 4, 2020. The Bahrain Formula One Grand Prix will take place on Sunday. (Hamad Mohammed, Pool via AP)

SAKHIR, Bahrain (AP) — Lewis Hamilton’s replacement driver set the fastest times in both practice sessions for the Sakhir Grand Prix on his debut on Friday.

George Russell, given his chance with Mercedes after Hamilton tested positive for COVID-19, finished ahead of Max Verstappen in both sessions on the desert track under floodlights. The Red Bull driver was 0.128 seconds behind in the second, when Sergio Perez was 0.153 back in third.

Hamilton, who has already clinched the season-long Formula One championship, is self-isolating for 10 days and could also miss the final race in Abu Dhabi next weekend.

Russell has bigger feet than Hamilton and had to squeeze into size 10 racing boots rather than his usual size 11.

“It’s been good to be working with the team today and I’m learning a lot every single lap I’m in the car,” the Briton said.

Mercedes driver Valtteri Bottas, who is fighting to hold off Verstappen for second in the championship, was fourth quickest in the first session, 0.322 behind Russell, then 11th in the second, when he finished 0.608 behind his teammate.

“A tricky day for me,” Bottas said.

Bottas trails Hamilton by 131 points and leads Verstappen by 12 — although Verstappen has a slower car.

Drivers are again racing at the Bahrain International Circuit in Sakhir, but on a smaller high-speed outer track.