Racing Royalty: Petty lineage back in spotlight at Daytona 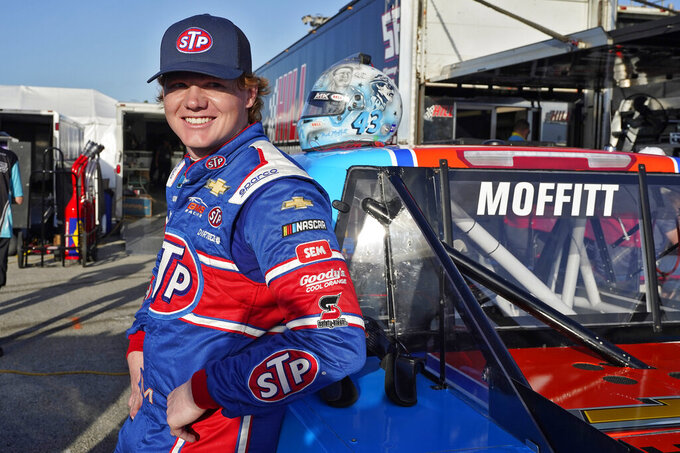 DAYTONA BEACH, Fla. (AP) — Thad Moffitt is more apt to wear a baseball cap than a feathered cowboy hat. And when he’s out on a date night with his girlfriend at the bowling alley or the beach, he wears sneakers — not cowboy boots.

Moffitt might not ask his grandpa for much fashion advice.

But when it comes to cars, well, who better to seek advice from than NASCAR’s King?

Moffitt does share bonds with grandpa Richard Petty, at least on the track: The 21-year-old Truck Series driver will make his NASCAR national series debut in the No. 43, with race family sponsor STP on the truck Friday night in the season opener.

Moffitt will break out the truck in Daytona, where grandpa won seven Daytona 500s and great-grandpa Lee Petty won the very first one in 1959 in an Oldsmobile.

Richard Petty, who at 84 remains the face of Richard Petty Motorsports, is synonymous with NASCAR. With that looping script in the R and P, he’s likely signed more autographs than any athlete, ever. He’s even spry enough to star in commercials with Moffitt.

“He’s a really big part of everything I’ve done in my career so far,” Moffitt said Thursday.

The Petty pipeline runs deep in NASCAR: Lee Petty is a NASCAR Hall of Famer and father of The King. Richard Petty’s son, Kyle, won eight times in the Cup Series and is now a broadcaster. His son, Adam, was in the beginning of his NASCAR career when he was killed at 19 during practice at New Hampshire Motor Speedway.

Brian Moffitt is CEO at Petty Motorsports and his wife, Rebecca, is Richard Petty’s daughter.

“It’s just going to be really cool for me to add to the legacy this weekend,” Moffitt said.

Moffitt is driving a truck out of Reaume Brothers Racing, and GMS Racing will provide technical and engineering support.

The blue-and-orange paint scheme on the truck pays homage to the 30th anniversary of Petty’s “Fan Appreciation Tour” from his 1992 retirement season. Petty retired as NASCAR’s career Cup wins leaders with 200.

“To have Thad racing with STP at Daytona, a place that our family has been so successful at, is just very special to me personally,” Petty said. “Obviously, I’ve watched Thad’s career grow and he is ready for this next step. It will be great to see another member of the Petty family racing with STP.”

Moffitt was winless in 44 starts in the low-level ARCA Series and scored eight top-five finishes. Moffitt will compete in a hybrid schedule this season which will include 12 to 15 Truck Series races, ARCA, Late Model, and Trans AM.

“Grandpa never really wanted me to race a truck,” Moffitt said. “He always thought I should go from a car straight to a car. From ACRA to Xfinity. That’s the reason we ran ARCA for so long.”

Moffitt hopes he can hang with the veteran contenders in his first race.

“Honestly, I remember up to the press conference,” a stone-cold sober Rhodes said Thursday. “(It) got a little fuzzy in there and then they give me a bunch of water and like snacks, and then I diluted the beverages in the system and then it became memorable again.”

Matt DiBenedetto is a Trucks rookie after a winless Cup career flamed out after 248 races and one controversial ending. DiBenedetto, admittedly sour after losing his ride with Wood Brothers Racing, appeared in videos over NASCAR’s championship weekend at Phoenix Raceway saying “Let’s Go Brandon” and socializing with a conservative social media personality. DiBenedetto later apologized for his actions.