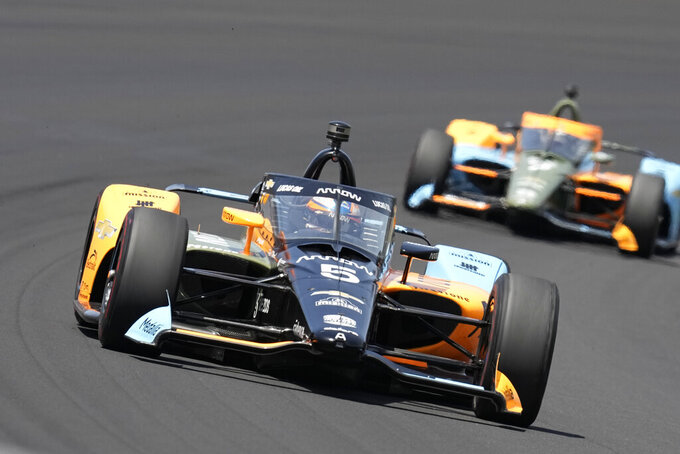 O'Ward became the ninth different pole winner through nine races this season — the first time that's happened in 61 years — and the Arrow McLaren SP driver now has a shot at the IndyCar points lead.

The modern-day record for different drivers winning the pole to start a season is 10 in 1952.

“This is huge man, it's a track position race,” O'Ward said of the difficulty to pass on Mid-Ohio's 13- turn, 2.258-mile course. “It's a long race. A lot can happen but we have a great starting position.”

Marcus Ericsson, Will Power and Josef Newgarden all failed to advance out of the first group of Saturday qualifying, then reigning series champion Alex Palou was knocked out of the second round.

It created a huge opportunity for O'Ward and Scott Dixon to make up serious ground in the championship race. O’Ward and Dixon were the only two drivers ranked in the top six of the championship standings to advance to the final round of Saturday qualifying; O'Ward is ranked fourth in the standings, 45 points behind Ericsson, while Dixon trails his Chip Ganassi Racing teammate Ericsson by 69 points.

O'Ward was followed in qualifying by Scott McLaughlin of Team Penske as Chevrolet drivers swept the front row. Colton Herta of Andretti Autosport was third for Honda and O'Ward teammate Felix Rosenqvist was fourth.

Dixon and Simon Pagenaud of Meyer Shank Racing rounded out the third row in Hondas.

A pair of early mistakes in qualifying hampered the two championship leaders.

Indianapolis 500 winner Ericsson said dirt was being kicked back onto the track during his attempt. The current IndyCar points leader will start 13th. Power was penalized for interfering with Helio Castroneves' laps.

Newgarden said he was stymied by traffic.

“It's just IndyCar qualifying, sometimes it is totally fine and you have no issues,” Newgarden said. "It's a tight track and we're going out first and I catch the slowpokes all the time."

Power, who trails Ericsson by 27 points in the standings, had his two fastest laps disqualified and will start 21st. He said it was a Team Penske error that likely cost him any chance of winning Sunday.

“In this series, anything can happen, but you're not going to that many cars to fall back. You're not going to win, put it that way," Power said. "And weekends when you've got a car that can win, you cannot be doing this. This is on us, we weren't on top of that one, and that's the rules.”

Tatiana Calderón traveled from her first Goodwood Festival of Speed in England back to IndyCar, where her future in the series is in doubt because of sponsorship issues.

The Colombian driver was scheduled to drive all the road and street course races for A.J. Foyt Racing this season, but sponsor ROKiT Group is behind on its payments. Foyt still brought Calderon to Mid-Ohio because she tested the track a year ago while putting together her deal.

“I know a little bit about the track and the feeling with this car," she said. "It’s the first time I am going to a circuit that I know. I’m looking forward to it.”

She'll start 26th, but the future of the No. 11 Chevrolet beyond Sunday is not guaranteed. ROKiT is also behind on payments on the No. 14 driven by Kyle Kirkwood. The team moved associate sponsor Sexton Properties to the primary position on Kirkwood's car at Mid-Ohio, and team President Larry Foyt is working to resolve the funding shortfall.

“We are trying to work through a difficult situation as I know ROKiT wishes to continue the program, but there are some issues which may prevent that," Larry Foyt said. "We will continue to either resolve it with ROKiT or try to find alternate funding which is difficult at best at this point in the season. The No. 14 entry will run the entire season as it is not solely dependent on the ROKiT funding.”

Calderon, meanwhile, spent her time at Goodwood driving the 1957 Kuzma Offenhauser in which Jimmy Bryan won the national championship. When Bryan switched teams in 1958, A.J. Foyt made his first start in the car at the Indy 500.

“It has been a privilege to be driving the ... car at Goodwood and to learn that it was the car where A.J. did his debut in Indy,” said Calderón. “Also to contrast it a little bit with today’s Indy cars and see how much change we’ve seen in Indy cars."

It is fitting that Graham Rahal will make his 250th career start at Mid-Ohio, a track located near Rahal Letterman Lanigan's original headquarters in Hilliard.

Rahal has made 15 previous IndyCar starts at Mid-Ohio and won on his home course in 2015. When he was 16, Rahal became the youngest winner of the SCCA National Formula Atlantic championship with a dominating victory. He also competed in the Star Mazda race here in 2005 and tested a sports car at Mid-Ohio in 2007.

“It’s always great to be home in Central Ohio. We have very high hopes and expectations as we always do when we go back to Mid-Ohio," Rahal said. “I’d love to get a podium or a win there at home. Fourth of July weekend is a big weekend for everybody.”