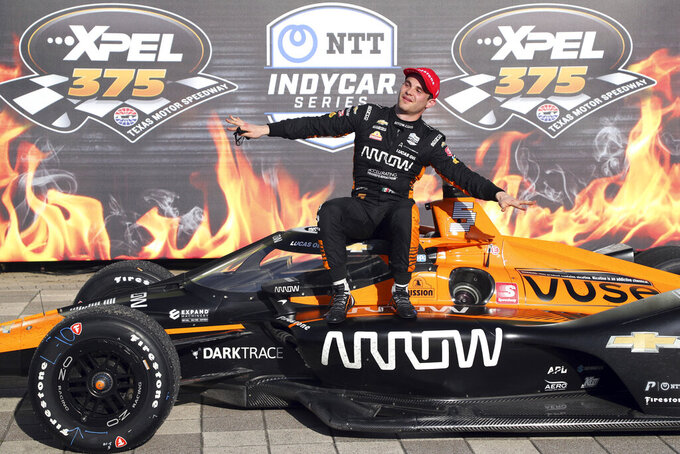 American racer Colton Herta was announced Saturday as a test driver for Formula One team McLaren as part of its 2022 program.

Herta, who turns 22 at the end of the month, currently competes in IndyCar for Andretti Autosport. Michael and Mario Andretti both believe the second-generation racer is F1 material and would like to move him to the series should Michael Andretti land an F1 team.

In the meantime, McLaren will use him under new F1 regulations that allow teams to test 1-year-old cars under the “Testing of Previous Cars” provision. The McLaren TPC program gives the team an option to test potential drivers and evaluate young talent for the future.

“Colton is a proven talent in IndyCar and we will be interested to see how he adapts to a Formula 1 car," McLaren principal Andreas Seidl said. "We believe this testing program will provide him with valuable experience while demonstrating the benefit of expanding previous car testing to showcase promising drivers for the future.”

Herta does not have the necessary points required to obtain the FIA license required to compete in F1. He became the youngest winner in IndyCar history in 2019 when he won at Circuit of the Americas days before his 19th birthday.

“We’re pleased to see this opportunity come together for Colton and look forward to seeing him take his first laps in an F1 car,” Michael Andretti said. “The practice time with McLaren F1 will help provide Colton with valuable FIA Super License points, which is a goal of ours as we continue efforts to bring the Andretti brand back to the Formula One World Championship.”

The Californian is the son of former racer Bryan Herta, who is his strategist in IndyCar. He has won six IndyCar races and seven poles and is considered an IndyCar title contender.

Herta wants to race in F1 one day soon so that he'd still have a long enough runway to return to IndyCar to complete his career. He drove the closing stint in January for the class victory at the Rolex 24 at Daytona and then teamed with Jimmie Johnson to finish a stunning second for the United States in the Race of Champions.

“I want to thank McLaren for the opportunity to get my first laps in a Formula 1 car, which has always been on my racing bucket list," Herta said. "This will be a great opportunity for me to gain some valuable experience in a new form of motorsport and learn from such an established team like McLaren F1.”

The signing of Herta puts a wrinkle in current McLaren IndyCar driver Pato O'Ward's hopes to move to F1. O'Ward and Herta are former teammates — and were teammates in January on their winning Rolex car — and O'Ward also is trying to get his F1 license.

McLaren head Zak Brown said last month he does not have an open F1 seat, with both Lando Norris and Daniel Ricciardo signed to long contracts. Ricciardo is believed to be signed through 2023; Norris signed an extension in January through 2025.

“We want to have a test program for young drivers like we used to have in the past. Pato in the family is natural,” Brown said. "Right now we don’t have any seat available. Lando is under a very long-term contract. Daniel, we have another couple of years with, so there is no imminent seat available.

“To just give Pato some seat time because you never know if a driver gets injured, or gets COVID, strange things have happened. But what we won’t do is compromise the IndyCar team at all. So I would never take Pato out of IndyCar into F1 without having a great solution because IndyCar is as important as is Extreme as is Formula One to being competitive. So this is not a training ground for Formula One.”