Max Verstappen the talk of F1 amid Mercedes move speculation 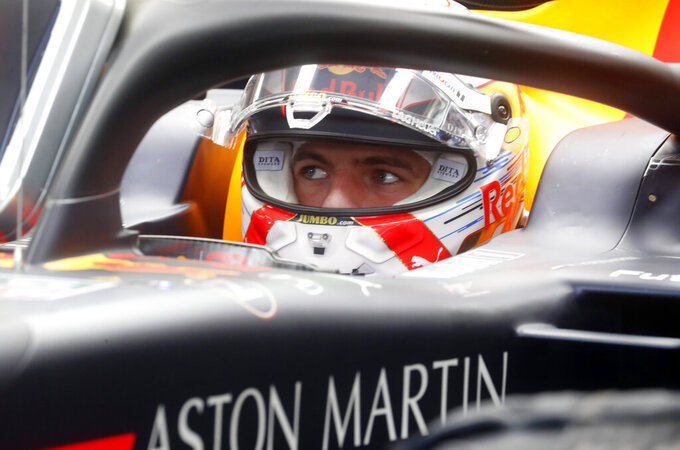 BUDAPEST, Hungary (AP) — Since engine failure forced an exasperated Max Verstappen out of last year's Hungarian Grand Prix, he has 11 podium finishes among 20 consecutive Formula One races in the top five.

After spectacular recent wins in Austria and Germany, the 21-year-old Dutchman is in the form of his career heading back to the Hungaroring for Sunday's race.

Verstappen's remarkable consistency comes alongside a greater maturity. He has focused his mind better, while keeping the panache and the breathtaking speed that earmarked him as a future star when he burst onto the scene by winning the Spanish GP in May 2016.

At 18, and on his Red Bull debut, he became the youngest winner of an F1 race. Only an unreliable engine, along with some reckless overtaking and the occasional clash with then-teammate Daniel Ricciardo, held Verstappen back.

Red Bull's ruthless decision, dropping Renault engines and switching to Honda this year, has ironed out irritating reliability issues that were a huge source of frustration and a constant distraction within the team — not least for the drivers.

Now Verstappen can focus on driving to the best of his undoubted ability, rather than worrying if he'll finish a race because of a fragile engine. Ricciardo's move to Renault, too, has reinforced Verstappen's status as No. 1 at Red Bull. Verstappen is a massive 107 points ahead of his new teammate Pierre Gasly. After 11 races, Gasly has yet to get on the podium.

"It's very tough if you go up against Verstappen at the moment, for me arguably he is the most in-form driver on the grid. That's an enormous barometer for any driver to be measured against," Red Bull team principal Christian Horner said. "As a competitor you always want to measure yourself against the best that you can. So, he's a benchmark that Pierre is measuring himself against."

Verstappen's two wins in the past three races caught the eye — even by the flamboyant Verstappen's standards — and sent the legions of orange-clad fans following him everywhere around the globe's 21 races into delirium.

First, Verstappen made a brilliant surge from the back of the field at Spielberg on June 30, overtaking runaway race leader — and former bitter junior karting rival — Charles Leclerc's Ferrari near the end with a passing move of staggering audacity and dazzling technique.

Last weekend, Verstappen's victory in the rain-soaked and chaotic German GP was arguably better. He kept his nerve in a crash-strewn race to clinch a seventh GP win, despite spinning his car a full 360 degrees after one of several tire changes proved problematic.

"(It) was a phenomenal performance by him, to keep his head, to have the pace in all varying conditions, and come out on top and win," Horner said. "He's in great form and hopefully we can continue that form into the summer break and out of the other side as well. He's certainly delivering at an extremely high level."

Verstappen is the talk of F1 amid increasing speculation he could drive at Mercedes, alongside five-time world champion Lewis Hamilton next season in what would be a mouthwatering inter-team rivalry.

Although Horner acknowledges "there are always trigger points" in a driver's contract, he says Mercedes head of motorsport Toto Wolff has not approached him about signing Verstappen.

"Toto has certainly not spoken to me about it. He speaks to almost every driver on the grid, so I would think if he has had a conversation it's been direct, not through the team," Horner said. "The situation with Max is clear and as with other drivers there are always trigger points. But in terms of having those two in one team, I haven't heard from Lewis either that he wants (Verstappen) to join next year. "

The speculation has increased, however, with Mercedes yet to offer Valtteri Bottas a contract for next year.

After Verstappen, the son of ex-F1 driver Jos Verstappen, won 68 of his first 70 karting races, his talent was obvious.

His path to the top of F1 seems inevitable, too, although he might be too far back to challenge for this year's title since he sits 63 points behind Hamilton.

"With Mercedes having had such a dominant start to the season, it is really hard to catch them," Verstappen said. "We are going to try but I am not thinking about the title."

But Bottas, who is only 22 points ahead of him and under pressure to keep his Mercedes seat, is well within his sights.