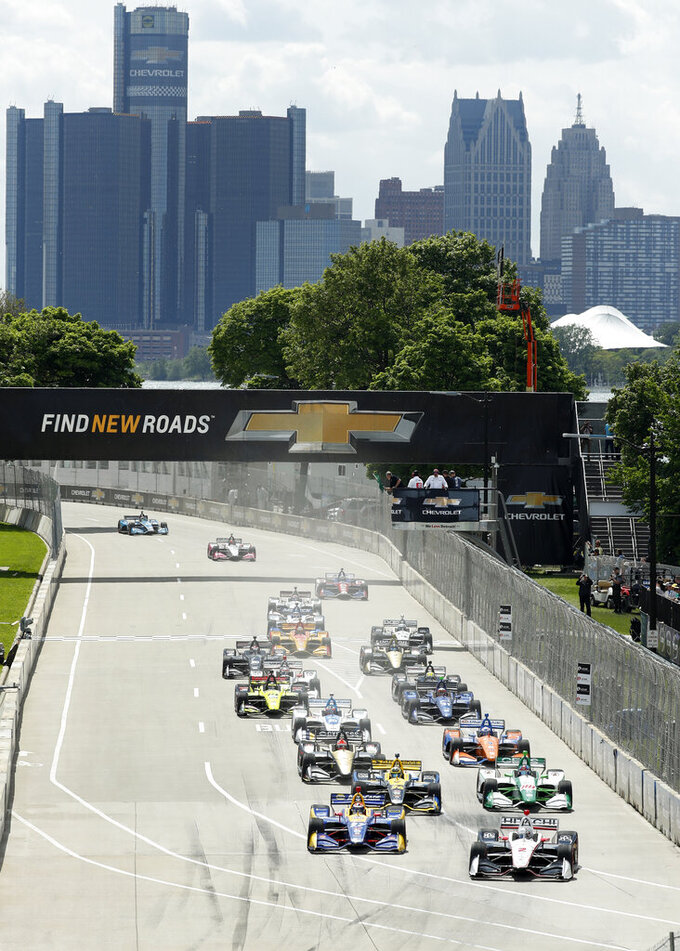 The field takes the green flag at the start line during the second race of the IndyCar Detroit Grand Prix auto racing doubleheader in Detroit, Sunday, June 2, 2019. (AP Photo/Paul Sancya)

Scott Dixon has won the Detroit Grand Prix, giving the five-time champion his first win this year and the 45th of his career.

Scott Dixon is racing toward his first win of the season.

The Chip Ganassi Racing driver was in control toward the end of the 70-lap Detroit Grand Prix race. The five-time champion has 44 career victories, but none this year.

Josef Newgarden, who won Saturday on Belle Isle, was able to return to the race after being knocked out of it following a collision with James Hinchcliffe.

The five-time champion took the lead midway through the 70-lap race when rookie Santino Ferrucci went in for his first pit stop. Ferrucci led for 20 laps after being out front for only one lap this year, briefly racing in front of the pack last week at the Indianapolis 500. The Dale Coyne Racing driver had a career-best, seventh-place finish at Indy.

Ferrucci had the only car on the track that had not gone in for a pit stop when Josef Newgarden collided with James Hinchcliffe on lap 33. Newgarden, who won Saturday, was knocked out of the race.

Dixon has not won a race this year. He has 44 career victories, including one last year on Belle Isle.

The Detroit Grand Prix is underway on a sun-splashed afternoon a day after thunderstorms shortened the first of two races.

Josef Newgarden started out front for the first time this season, aiming for a sweep in the Motor City. The Team Penske driver outlasted Alexander Rossi on Saturday during a 75-minute timed race on Belle Isle.

The 70-lap race Sunday got off to a messy start with Indianapolis 500 champion Simon Pagenaud, Patricio O'Ward and Tony Kanaan colliding on the opening lap, bringing out the yellow flag.

Scott Dixon was honored by Queen Elizabeth II on Sunday with the Companion of the New Zealand Order of Merit in recognition of his services to motorsport.

The five-time IndyCar champion will receive the award at Buckingham Palace.

Josef Newgarden has won his first pole of the season, setting him up to sweep the Detroit Grand Prix races.

The Team Penske driver turned the fastest lap at just under 1 minute, 15 seconds in qualifying Sunday, a day after he won on Belle Isle for his second victory of the year.

Alexander Rossi, who has finished second in his last two races, will start second. Zach Veach will start a career-best third, followed by rookie Colton Herta and James Hinchcliffe.

Indianapolis 500 champion Simon Pagenaud will begin in the second half of the 22-car field, qualifying 14th. He began Saturday's race 13th and finished sixth as Newgarden joined him as IndyCar's two-time winners this year.