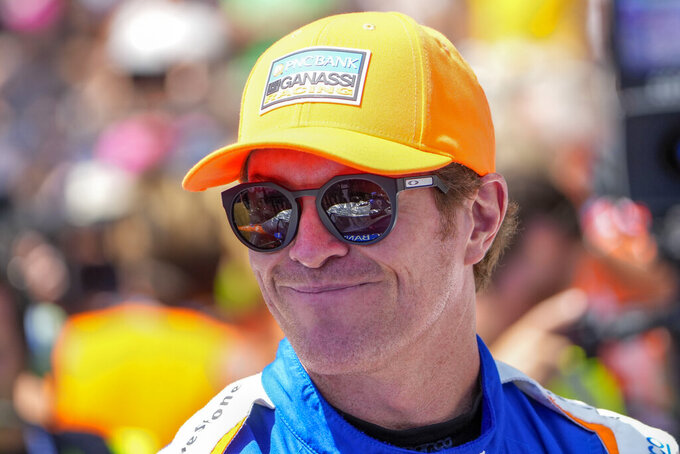 Scott Dixon, of New Zealand, walks to his car before the Indianapolis 500 auto race at Indianapolis Motor Speedway in Indianapolis, Sunday, May 29, 2022. (AP Photo/AJ Mast)

DETROIT (AP) — The milk has barely been washed out of Indianapolis 500 winner Marcus Ericsson’s firesuit and the IndyCar season has gone wild.

The Swede is the new points leader, free agency has picked up at a dizzying pace and the reigning IndyCar champion said his name has wrongly been placed into the rumor mill.

And it's the last race on Belle Isle, to boot.

Belle Isle was a doubleheader the last eight years and Ericsson won on Saturday last season, with O’Ward winning on Sunday. It is just a single Sunday race this weekend, the final time the event will be held on Belle Isle. The Detroit Grand Prix will be moved to a downtown street race next year.

So it is only fitting that the hangover from the Indy 500 held just last week and all the drama of the IndyCar Series — remember, there's still 11 more events on a schedule that concludes Sept. 11 — marks Belle Isle's finale.

The ink has only just dried on O'Ward's contract extension with Arrow McLaren SP and he's thinking big picture all the way. He lifted off the gas on the last lap at Indy as he challenged Ericsson for the win, and on Friday still thought it was the right decision.

O'Ward believes he couldn't complete the winning pass and would have crashed — an inexcusable result in a race worth double points. Ericsson shot from eighth to first in the standings with the victory, while O'Ward moved from seventh to second and sits 13 points back from he lead.

Other drivers disagreed, with reigning IndyCar champion Alex Palou insisting he'd have gone for the Indy 500 victory no matter what.

O'Ward had the backing of his team, though, as Arrow McLaren makes huge steps toward becoming one of IndyCar's top organizations. The team this week announced it had signed 2016 Indy 500 winner Alexander Rossi for next year, O'Ward last week inked an extension and is the centerpiece of the organization, and McLaren has plans to build a state-of-the-art Indianapolis shop as it prepares to expand to three cars next year.

“What I’m proud of is Pato’s maturity to understand us as an organization,” said team president Taylor Kiel. “He made a move that was wise beyond his years with the bigger picture in mind. I know in his heart he wanted to keep it flat, see what happened. But something in the back of his mind said, ‘Let’s focus on the championship.’ That to me is a huge thing.”

A speeding penalty on pit road decimated Dixon's shot at a second Indy 500 victory after he'd dominated nearly the entire build-up to the race. He went over 234 mph in a record-setting pole-winning run and then led 95 of the 200 laps.

Dixon has made winning another Indy 500 the highest priority and the six-time IndyCar champion was “for sure devastated after the race," said Chip Ganassi Racing teammate Palou.

“We're in Detroit now. I feel amazing,” said Dixon, who added he doesn't often carry disappointments for long. “I'm pretty quick with that stuff. For me, it's more about how everybody else feels. I think the saving grace was one of the Ganassi cars (Ericsson) still won the race."

Andretti Autosport and McLaren both announced anticipated driver changes for 2023. Kyle Kirkwood will complete his rookie season with A.J. Foyt Racing then replace Rossi at Andretti, while Andretti is going to a yet-to-be decided car at McLaren.

Kirkwood, who is driving the IMSA sports car for Vasser Sullivan Racing on Saturday, was fastest in Friday's only IndyCar practice and wants to close his lone season with Foyt strong.

“All I want to do is win for the team because they worked really hard for it,” said Kirkwood.

Rossi said he decided last summer that this seventh season with Andretti would be his last. Andretti held an exclusive negotiating window with Rossi but let him sign with McLaren early to facilitate its Kirkwood move. Rossi is approaching the three-year mark of his last victory.

“It was clear that I was going to look at different options and explore what was out there,” said Rossi. “I’ve driven for Andretti Autosport for a long time. Sometimes you need to change things, whether that’s on a personal side, a professional side or the both combined. I think it was time for a change.”

But what about that third McLaren seat next year?

O'Ward made a strong case to keep his current teammate Felix Rosenqvist, who is in a contract year and still being evaluated by the team. He finished fourth in the Indy 500.

The name most associated with the ride, though, has been Palou. The Spaniard won the IndyCar title in his first season driving for Ganassi — second in IndyCar — and has become a hot commodity in the paddock.

Palou was thrilled Friday to be part of the rumor mill, but said he doesn't know why his fellow competitors think he's leaving Ganassi for McLaren.

“I'm good. I'm not talking to other teams,” Palou said. “I mean, my name is all around, but because somebody is interested doesn't mean I am interested."