Column: Chastain calms down to surge into title contention 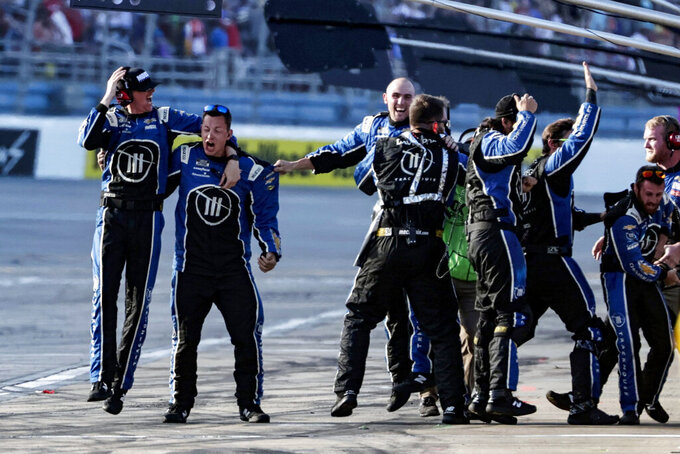 TALLADEGA, Ala. (AP) — He stood atop the winning Chevrolet at Talladega Superspeedway ready to celebrate in his own signature way. But when Ross Chastain smashed a month-old watermelon onto the track, the crowd roared as if it was an Earnhardt who had just snatched a thrilling, last-lap victory.

It was “unlike anything I’ve ever experienced," said the eighth-generation watermelon farmer from Florida.

“I want it to smash; I don’t want it to just bust open,” Chastain said. "I heard (the cheers) and I felt them. The car was shaking. Then my legs started shaking. My arms were shaking. I took a second, scanned left to right, so like from the start/finish line was in my peripheral, I scanned down to the tri-oval, people were going crazy. It was wild. Smashed it and they erupted again.

"It’s indescribable. I don’t have the words, but just the feeling they pumped into me was what you dream of. That’s what I wanted to do when I first wanted to show watermelons, if I was ever able to win a race, I wanted that feeling. I wanted that reaction.”

Rewind to 2018 and Chastain was just another struggling racecar driver desperate for a big team to give him a chance. He drove a motorhome for Spire Motorsports to the track most weeks to earn extra cash; the top drivers fly to the races, where their luxury home-at-the-track is waiting and stocked with groceries. Chastain needed a side hustle.

The CEO of DC Solar took notice of Chastain at the track one day washing the Spire motorhome and decided to back him with company money in an Xfinity Series ride for Chip Ganassi Racing in 2019. Little more than a month later, the FBI accused DC Solar of being a Ponzi scheme and the deal collapsed.

Ganassi closed the Xfinity Series team, Chastain was back at square one and the DC Solar CEO was sentenced to 30 years in prison.

The next few seasons were a rollercoaster for Chastain, who desperately wanted to prove he deserved a top Cup ride. He made mistakes, wrecked with teammates and won just one Xfinity race after the Ganassi deal fell apart.

Then Ganassi called again ahead of the 2021 season to fill Kyle Larson's seat. And that was going pretty good up until Ganassi shocked the industry by selling his entire NASCAR organization to Justin Marks last June.

Now the driver was again panicked — even a little nauseous — at starting all over again.

Marks, who along with partner Pitbull has built Trackhouse Racing into a winning team in just its second season, assured Chastain that things would be fine. He signed him to drive with essentially his entire Ganassi team from last year and told him to relax.

The result is two wins in the last five races, a guaranteed spot for Chastain and Trackhouse in the playoffs and two gloriously smashed watermelons. The first one he smashed on the road course at the Circuit of the Americas in Texas a month ago.

“Ross has spent a number of years in his career fighting every lap of every race because tomorrow wasn’t given, because next week was not guaranteed,” Marks said. “I’ve seen and continue to see so much talent in him that my goal was to put him in a position where he didn’t have to do that, where he had some job security.”

“He’s now comfortable in his job and skin, understands and knows this team is being built around him," Marks added. "He can take a breath, be more calculated, not try to get it all right now in this moment.”

That's what won Chastain the race on Sunday.

Unlike previous superspeedway races when Chastain often made the wrong strategic moves or, worse, made outright mistakes that led to wrecked cars, he remained determined not to screw anything up. He stayed in the bottom lane behind leader Erik Jones and wasn't going to budge.

When Jones moved up a lane in a defensive block on Larson as they exited the final turn, Chastain just kept his foot on the gas. It was nothing but clear track in front of him and Jones had his hands full holding off Larson in the top lane.

That patience and maturity earned Chastain the shocking victory. He led only the final stretch of racetrack to the finish line the entire race.

“The patience side, it’s hard,” Chastain said. “It’s so hard. Every split-second decision has to be quick, but also you have to be able to live with the consequences of it. I just thought that was my best maneuver, which I never thought that before. I made the mistake several times in Xfinity cars (when) I moved up or made a move, and (someone else) went on to win the race."

He will have a new watermelon this Sunday at Dover in Delaware If Chastain continues to show the same maturity, Trackhouse may need to replenish its supply.