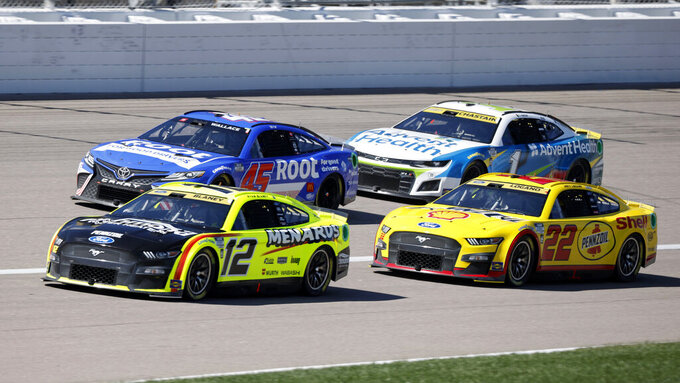 Ross Chastain, the driver with a growing list of enemies, heads into the first elimination race of NASCAR's playoffs in a pretty comfortable position above the cutline.

It's Kyle Busch, and Austin Dillon, Chase Briscoe and Kevin Harvick, who are trying to stave off elimination Saturday night at Bristol Motor Speedway.

And yet Chastain can't relax, even as he sits ninth in the 16-driver field. The bottom four in the standings will be eliminated when the checkered flag falls at the Tennessee short track, and Chastain can't guarantee he won't be knocked below that cutline. He's angered enough fellow drivers this year that any payback headed his way could be delivered at a most inopportune time.

“I can’t speak for what other people are thinking,” Chastain said before Friday's practice and qualifying at Bristol. “I just know that I hit the wall nice and hard at Pocono.”

Pocono is where Denny Hamlin refused to give Chastain even an inch of room on the track on a late restart because of previous incidents between the two. Hamlin had already declared “I've reached my peak” with Chastain before his aggressive retaliation forced Chastain into the wall.

Since then, Busch has made “Chastained” a verb in reference to when a driver gets hit by the eighth-generation Florida watermelon farmer, who has had a breakout first season with Trackhouse Racing. An anti-Chastain sentiment has developed and it wasn't helped last week when hard racing between Chastain, Harvick and Bubba Wallace caused Harvick to crash and lodge the first three-race DNF streak of Harvick's career.

Chastain acknowledged he “didn’t lift in time, didn’t leave him enough room, forced him into the wall” and that Harvick's crash “was still my fault.”

Chastain even apologized to the 2014 NASCAR champion, who heads into Saturday night last in the 16-driver field because of Harvick's terrible opening two playoff races. Harvick is essentially in a must-win situation Saturday night for any shot at advancing into the second round.

Because non-playoff drivers Erik Jones and Wallace won the first two playoff races, only Christopher Bell of Joe Gibbs Racing has locked himself into the second round via points. And Bristol, a .533-mile bullring, has a long history of bumping and banging and heated tempers after the checkered flag.

“You look at Bristol the last few years, it has been wild finishes and there is a lot on the line and there’s a lot of points,” said Joey Logano, who is ranked fourth headed into Saturday night.

NASCAR this season introduced a new spec Next Gen car that has equalized the competition, but Bristol was covered in dirt in the spring when the Cup Series made its first visit to the track. The race Saturday night is on the traditional concrete surface.

“I think Bristol has the most entertaining racing of any track we go to, period. I don’t think there’s a track better than this one, but I also think everyone’s expectations are unrealistic of what things you can possibly get out of it,” Logano added. "Whether it’s dirt or concrete, it’s been pretty intense lately and the end of the races have ended in fireworks in a lot of them.

“So, I don’t know why you would be expecting anything different than that.”

ELLIOTT ON THE SCHEDULE

NASCAR this week released its 2023 schedules to much feedback from its participants, particularly 2020 Cup champion Chase Elliott.

Elliott called for a more compact schedule, more night races, and argued against NASCAR continuing its season into November and going head-to-head with the NFL.

“I'm a firm believer that less is more in the sense of the timing of a schedule and when we could end our season to make the most for our TV ratings,” Elliott said Friday. “I mean, 36 (races)? 45? 50? I don't think it matters how many races we have, but I don't see any reason to be competing against NFL football when that starts. In my opinion, that's not a battle we're ever going to win.”

He also took exception to only Daytona in the summer, Bristol in the playoffs and one Atlanta race being scheduled to run at night. Elliott suggested the spectators in attendance would enjoy more races under the lights.

“There's a lot of Sunday afternoons we spend in some really hot environments, which is fine, I'm good with that, but if I was a fan sitting in the bleachers, I wouldn't be,” Elliott said. “You know, three or four hours in August? I'd much rather do that at night.”

NASCAR lastly didn't leave a hole in the Cup schedule for any active drivers to miss a race to compete in the 24 Hours of Le Mans as part of NASCAR's special project to participate in the race. The Le Mans project is with Hendrick Motorsports, so many have assumed that Elliott or teammate Kyle Larson would be part of a three-driver all-star lineup.

Elliott said he was never skipping a race to go to Le Mans, which will run the same weekend NASCAR is scheduled to be at Sonoma in California.

“I don't have any interest in it, and the reason being is because there is no competition in the class,” Elliott said. NASCAR's entry won't count for points or position and is an exhibition event at Le Mans.

“I want to go and compete and that's the part that I enjoy, seeing where you stack up against other competitors and where I need to be better and challenging myself and pushing myself. When there's no other cars in the class, that would take a large piece of the fun out of it for me. We can't do it anyway, but I don't have a ton of interest in the way it is right now. Not this one.”

Joey Logano will make his 500th Cup Series start Saturday night. Logano is 32 years old and made his Cup debut at age 18. ... Austin Dillon said Richard Childress Racing gave the pit crew of his No. 3 Chevrolet five-year contracts to build continuity and enhance the team culture at RCR. ... Petty GMS Motorsports will use Joe Gibbs Racing pit crews next season. The No. 42 team began using JGR crews last weekend at Kansas Speedway; both the GMS cars will use Gibbs crews next season.