Alonso confident in team prep for another Indy 500 attempt 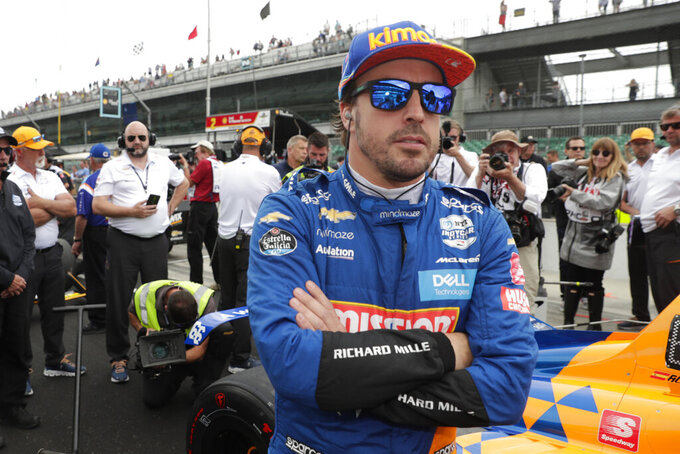 INDIANAPOLIS (AP) — His steering wheel has been secured and the car is the proper color, two signs Fernando Alonso has a far better shot this year at the Indianapolis 500.

The former Formula One champion failed to qualify for the race last year in a spectacularly woeful effort by McLaren. The Spaniard has returned to Indianapolis Motor Speedway for a third attempt at winning the final leg of motorsports' version of the Triple Crown, this time with an experienced organization.

Alonso will drive in the Aug. 23 race for Arrow McLaren SP, the Sam Schmidt-owned team that has been bolstered this year by a partnership with McLaren. During his recent seat fitting, Alonso noted the team is on top of preparations.

“I found a lot of talented people and good resources on everything, a lot of personnel, each one doing a specific job,” Alsono told The Associated Press on Tuesday. “I had a very nice feeling, a nice surprise of how well the team is organized and prepared and I think it's going to be a good 500 for us."

Alonso entered his first Indy 500 in 2017 with Andretti Autosport and led 27 laps before an engine failure ended his day late in the race. He returned last season as McLaren attempted to build a team that could qualify for Indianapolis on its own.

The project was a disaster from the start. The team tried to make its own steering wheel and wound up scrambling to buy one instead for Alonso's first test in the car. He lost track time at both the test and at Indianapolis when his cars weren't the proper shade of McLaren orange. The miscues continued all the way through qualifying when Alonso was bumped from the field of 33 by cars with considerably smaller budgets.

“Everything seems different this year, there is more in our hands and there are no surprises here or there. Everything is very organized and we are ready to go on track.”

Graham Hill is the only driver to win the Triple Crown, closing it with a win at Le Mans in 1972. Alonso is one of only 19 drivers to have competed in all three legs, and he and Juan Pablo Montoya are the only active drivers with wins in two of the three events.

“I feel night and day different. We’ve got an established operation and we’ve seen the progress Arrow McLaren SP is making,” Brown said. "We’ve got good people around him and people from McLaren who have worked with him, so we’re fully focused on putting a good car underneath him to give him the best shot we can.”

Schmidt overhauled his lineup after McLaren became a partner, replacing James Hinchcliffe and Marcus Ericsson with Patricio O'Ward and Oliver Askew. The two newcomers have a combined 20 IndyCar starts between them and neither has raced in an Indy 500.

Alonso, who is 39 and headed back to a full-time ride in F1 next season, is far more experienced than his two new teammates. Askew is 23, O'Ward is 21. Practices begin Wednesday.

Alonso noted the practice time for this year's race is nearly 11 hours less than his two previous trips to Indy. Alonso also hasn't competed in anything since the Dakar Rally in January, and his last time in a single-seat car was at Indianapolis 15 months ago.

“No worries with Fernando. He’s the most versatile driver I’ve worked with and his commitment levels and professionalism are second to none," Brown said. "He has a ton of experience at the top level and drivers of his caliber, and there ain’t many, don’t take long to get back up to speed.”

Alonso did not have anything scheduled this year as he had planned to prepare for the Indy 500 and then his return to Renault in F1 next season. An April test session at Indianapolis and simulator time in North Carolina were canceled by the pandemic and he spent the last six months training in Switzerland.

He said his desire to win Indianapolis and complete the Triple Crown has never been stronger.

“It's one of those things that you need to keep trying because eventually maybe one time it will come your way,” Alonso said. “The 500, especially, or Le Mans, they are races that you have been chosen that day — by the race, by the track, by the luck or destiny. There are no exacting mathematics on those kind of races. There is a luck factor. I have this impression that the more times you attempt, the more chances you've got.”