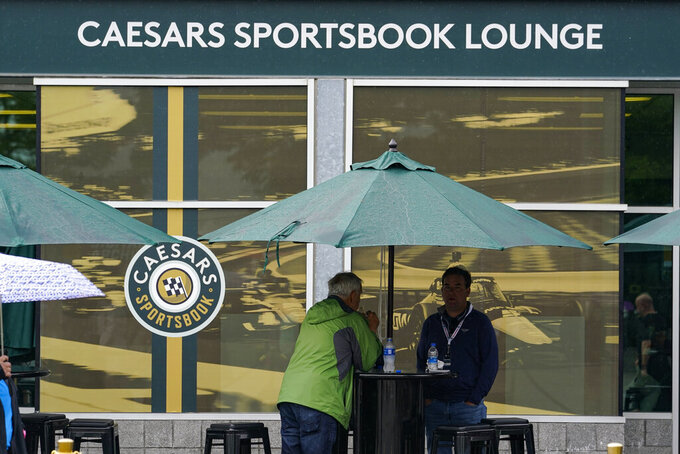 INDIANAPOLIS (AP) — Alex Kertis browsed a list of Indianapolis 500 favorites -- call it, a yard of picks -- on his phone and the potential bettor found his choice. The Indy resident just needed to brush up on Alex Palou before he tapped the screen.

Kertis had an ideal seat to learn: He soaked in the “Carb Day” scene from a barstool at Indianapolis Motor Speedway’s latest legalized enhancement with the Caesars Sportsbook Lounge.

This is not a sports book in the traditional sense -- there are no ticket windows or digital video walls flashing the latest odds. It is more of a working fan’s VIP suite with a DJ spinning tunes, racing always on the TVs, cocktails and a small arcade room holds a few virtually drivable NASCAR games.

If it's a push for fans to gamble, it is the gentlest of nudges. Simply punch up an app, commit to betting $20, download your credit card information and get to it. Fans can do this anywhere, of course, but the thinking is that an on-site book at IMS will only increase the, ahem, odds of fans placing bets on the likes of Helio Castroneves and Jimmie Johnson.

Few states report betting breakdowns by sport, but auto racing is a definite backmarker in all sports when it comes to betting interest.

Dover Motor Speedway opened an on-site kiosk and became the only track that allowed sports gambling on its property once Delaware legalized sports betting in 2018. The Delaware Lottery said auto racing is the second-lowest wagered sport in the state; Delaware has sold $505.6 million in total sports tickets since June 2018 with $1 million bet on auto racing — just 0.199% of sales, and most bets were placed on NASCAR. Less than $10,000 of the handle was on IndyCar.

Illinois does not offer a breakdown by racing series, but in 2021 only $7 million was wagered on auto racing, or 0.10% of the state’s legal betting handle last year.

The American Gaming Association estimated Americans wagered about $58 million on motorsports with legal commercial sportsbooks in 2021. The AGA estimated more than $1 billion was bet legally on this year’s Super Bowl alone.

“From a betting perspective, it’s a sport more heavily attended than heavily bet at the current moment,” said Jeff Benson, sports book operations manager at Circa Sports. “I think there’s definitely some challenges in terms of growing it.”

FanDuel Sportsbook has Scott Dixon and Palou as the betting favorites for Sunday's race. FanDuel lists prop bets and parlays for the NBA ( first to record a triple-double ), MLB ( first to record 2-plus hits ) and even NASCAR. But no fun side wagers outside of podium finish were listed Friday for the Indianapolis 500.

At IMS, next to the concession stands selling pork tenderloins and spiked lemonades, fans can pick up a pair of Roman emperor glasses and bet inside the lounge in a climate-controlled room -- a perfect hideaway at the site of the most storied race in the world.

“We don’t feel like this offends any of the traditions in any way. We’re not forcing it on folks,” IMS President Doug Boles said. “There’s a little of that in-seat gambling that’s going on anyway. I wouldn’t say we had any hand-wringing in adding it.”

Just plenty of finger-tapping on phone, aided by a new 5G network. The app is mandatory to enter the sports lounge and a first-time deposit of $20 earns $106 in credits (a nod to the 106th Indy 500).

Sports gambling has been legal in Indiana since 2019 and Caesars has yet to reveal any numbers on how many people downloaded the app. But with around 300,000 fans expected Sunday, Caesars and IMS expect numbers to soar. Casears and IMS both declined to say how the money would be shared.

“We’ll see probably five times more handle on that race than any regular-season race,” said Ken Fuchs, head of sports at Caesars. “It certainly does spike this weekend.”

The early signs were promising.

Brad Romack of Panama City Beach, Florida, has attended every Indy 500 (except 2020) since 1969. He enjoys Indy’s pageantry as much as the next traditionalist, but his interest was piqued by the lounge. He has a friend on Castroneves’ team and feels the sentimental pull to put a few bucks on the No. 6 car. But few big payouts emerge from affectionate feelings.

“I’d bet Scott Dixon,” he said, laughing. “I think the book is a good idea because if you don’t, you’re behind. Every other state is getting into it.”

Much like the Indy 500 champion, the key is to keep the momentum rolling from the weekend’s big win humming deep into the season - and turn casual bettors into hardcore gamblers.

Industry leaders can only hope betting slips can quickly become about as common for fans as wearing their favorite driver’s T-shirt.