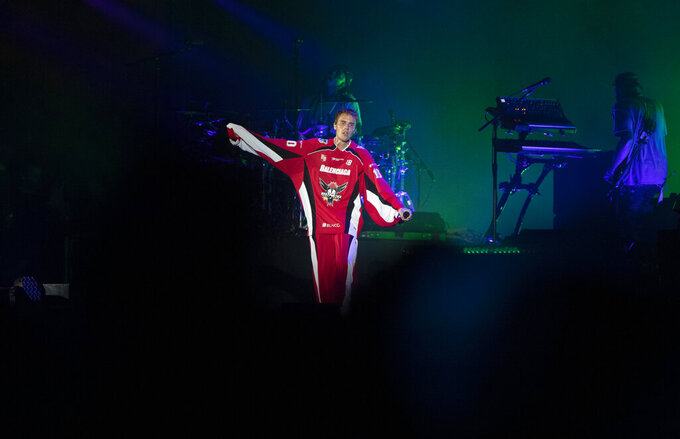 Mohammed bin Salman's tour kicked off just after the kingdom hosted its first ever Formula One race and as its first international film festival was underway — events showcasing Saudi aspirations to be a cultural stomping ground and sweeping social reforms following decades under ultraconservative norms.

Looming over the week's events, however, has been the 2018 murder of Saudi critic Jamal Khashoggi who was killed at the hands of agents who worked for the crown prince.

Khashoggi's slaying was again brought into sharp focus when French authorities said Tuesday that a suspect in his killing was arrested at an airport near Paris, only to acknowledge a day later that the man being held was not the same one wanted in connection with the case. Saudi Arabia had maintained that the man in question was misidentified and had called for his immediate release.

Still, news of the arrest came at a sensitive time for Prince Mohammed, who arrived to the UAE’s seat of power, Abu Dhabi, late Tuesday to discuss bilateral ties, persistent tensions with Iran, the ongoing war in Yemen and other regional crises. The prince has been empowered by his father, King Salman, to manage the country’s day-to-day affairs.

In Abu Dhabi, state media reported that Prince Mohammed and the emirate’s Crown Prince Sheikh Mohammed bin Zayed “lauded the strong brotherly relations between the UAE and Saudi Arabia, emanating from their belief in the shared destiny.”

“We are confident that together, we will be able to confront all challenges in the region and to maintain our common interests and the welfare of our peoples,” the Abu Dhabi crown prince, once seen as a mentor to the Saudi crown prince, was quoted in state media as saying during their meeting.

The traditional allies, however, have been increasingly competing for regional clout and investments as their foreign policies diverge.

On Wednesday, the Saudi crown prince visited his country’s pavilion at the World’s Fair in Dubai, where he met Dubai ruler Sheikh Mohammed bin Rashid Al Maktoum. The Saudi pavilion on the multi-billion dollar site of Expo 2020 is second in size to the host nation’s falcon-shaped pavilion. Saudi Arabia is bidding to host the World’s Fair in 2030.

The crown prince began his regional outreach on Monday in Oman, which has maintained a policy of neutrality that’s allowed it to serve as a back channel for talks between regional rivals.

The crown prince is expected to visit Qatar next, following a rebuilding of ties that ended a deeply divisive standoff among the energy-rich Gulf Arab states. He will conclude his tour in Bahrain and Kuwait.

After initial Western criticism over Khashoggi’s killing in 2018 inside the Saudi Consulate in Istanbul, big name investors, celebrities and sports stars have been making their way to Saudi Arabia in events organized and spearheaded by authorities ultimately overseen by Prince Mohammed. They've rebuffed calls by human rights organizations to boycott these events in protest of the ongoing crackdown against critics.

Earlier this week, celebrities such as Hillary Swank, Catherine Deneuve, Clive Owen and others were photographed on the red carpet at the inaugural Red Sea International Film Festival.

At the time of his killing, Khashoggi had been writing columns in The Washington Post critical of Prince Mohammed, even as he hailed parts of the crown prince's social reform agenda.

The fiancée of the slain writer called on pop star Justin Bieber not to preform at the F1's concert Sunday in the Red Sea city of Jiddah. Bieber took to the stage anyway, singing some of his most popular hits to an excited crowd of young Saudis and international visitors.

The Saudi government says such events showcase the kingdom’s potential and clout, and are tools to modernize the country.