Rare sight in F1 as both Mercedes struggle at German GP 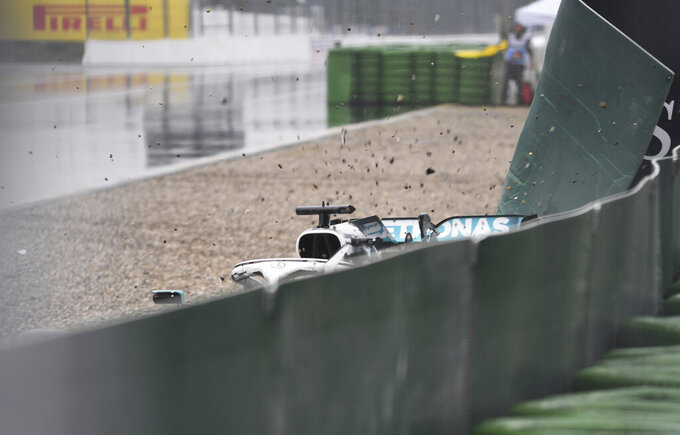 Britain's Lewis Hamilton from team Mercedes-AMG Petronas slips as he leads the track during the German Formula One Grand Prix at the Hockenheimring racetrack in Hockenheim, Germany, Sunday, July 28, 2019. (Sebastian Gollnow/dpa via AP)

HOCKENHEIM, Germany (AP) — On what was supposed to be a day of celebration, the rarest of sights in Formula One saw both Mercedes drivers struggling badly at Sunday's dramatic German Grand Prix.

"What a crazy race. This has been one of the most difficult races we've had as a team for a long time," Hamilton said. "I'm just glad it's over."

Hamilton was later promoted to ninth place and earned two points after stewards handed post-race time penalties to Alfa Romeo drivers Kimi Raikkonen and Antonio Giovinazzi — demoting them from seventh and eighth to 12th and 13th respectively — for an issue relating to their clutches at the start of the race.

Still, what a way for Mercedes to celebrate 125 years in motorsport and 200 F1 races.

"This was our Armageddon weekend," the team's head of motorsport Toto Wolff said with Hamilton in 11th. "This one hurts us to the core: it was a disastrous result today ... You add incidents, crashing out, tricky conditions, the wrong calls and in the end you're left with zero points."

For the second straight year, the skies opened up and drenched the Hockenheimring circuit on race day. This time Hamilton struggled, however, having won in similar conditions and despite starting from 14th on the grid in 2018.

"I thought I had the race under control," Hamilton said. "But we took a risk going out on slick (tires) and the race fell apart from there."

A rare mistake from Hamilton also contributed to a miserable day at the Mercedes motorhome, where celebratory smiles turned to frowns and stern faces.

"It was like ice out there," the British driver said. "I made a mistake and paid the price."

Hamilton was not helped by his usually slick team, either.

When he came in for repairs, mechanics were rushing around in a state of panic. One even sprinted to get a tire, grabbed it and sprinted back like he was running in a relay race and the heavy tire was a baton needing to be passed quickly.

Pandemonium at Mercedes? This team is the winner of every drivers' and constructors' championship since 2014.

"We were not prepared when (Hamilton) came in and made the wrong calls afterward," Wolff said. "Valtteri crashed like many other drivers today, which made a bad day even worse for us. Our 200th race in F1 has been the most difficult day we've had in a long time."

Mercedes needs a very strong response from Bottas in Hungary next weekend. He crashed while trying to overtake the considerably slower Racing Point car of unheralded driver Lance Stroll, not the Ferrari of Sebastian Vettel or the Red Bull of race winner Max Verstappen.

For Bottas, it might prove a turning point in his fragile Mercedes career. The Finnish driver, who turns 30 next month, is trying to earn another one-year deal for 2020, but Wolff has yet to choose between him and 22-year-old Frenchman Esteban Ocon.

Bottas may not wish to watch a replay of decision-maker Wolff's stunned disappointment on seeing the crash. Wolff lurched forward in his seat and just restrained himself from banging down his fist in sheer frustration.

One thing Bottas has always had is honest self-appraisal and he did not hide.

"I'm very disappointed ... I made a mistake which lost us a lot of points," Bottas said. "It's a shame because today was a good opportunity for me to make up some points to Lewis and it was my own fault."

Bottas remains in second place overall, 41 points behind championship leader Hamilton. But after declaring himself as a title contender at the start of the season, and backing that up with two wins in the first four races, Bottas has not won since.

Stroll was driving in the third-slowest F1 car, which won't reassure Wolff much.

"I had a good shot to get a podium and I was pushing hard to get past," Bottas said. "Then I suddenly lost the rear and just went off."