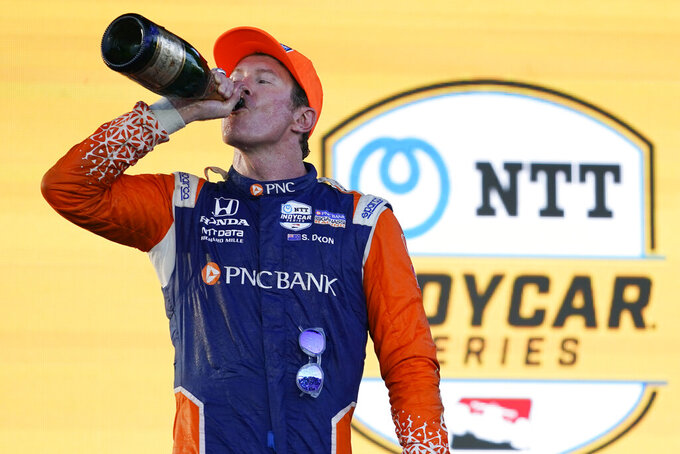 PORTLAND, Ore. (AP) — Scott Dixon watched Scott McLaughlin lead lap after lap around Portland International Raceway and figured at some point, his fellow New Zealander would be ordered to pull over.

There's a championship on the line — the closest IndyCar title fight in 19 years — and McLaughlin is at best a longshot. His teammate Will Power is the points leader, and so Dixon figured the radio orders would eventually come to call for McLaughlin to hand the lead to Power.

“I think I called it with 10 laps to go, 'I’m surprised they haven’t swapped yet',” Dixon said.

Team Penske issued no such team orders and will now wait until Sunday to see if it costs the organization the IndyCar title.

McLaughlin won his third race of the season and goes into this weekend's season finale trailing points leader Power by 41 points. Still mathematically in the fight, but in need of a lot of help on the California road course.

Power, meanwhile, finished second to McLaughlin at Portland on Sunday to widen his lead in the standings. He arrived in Portland with just a three-point cushion over teammate Josef Newgarden, and Power is now up by 20 points over both Newgarden and Dixon.

“Absolutely. I was on the radio asking for it,” said Power, noting that a victory would have been worth 11 additional points and sent him to Laguna Seca up 31 over the competition.

“Obviously, 10 points, 11 points would make a big difference,” Power said. “You wouldn’t be having to finish third (to win the title). You would have been having to finish eighth or something.”

Power then turned to Dixon and asked his longtime rival if his car owner, Chip Ganassi, would have called team orders in that position. Dixon nodded affirmatively.

But Power has seen it before from years of championship battles against the Ganassi group, including a four-year fight with Dixon and Dario Franchitti from 2010 through 2013. As Dixon and Franchitti always worked as a group, they often wondered why Power at Penske was forced to equally contend with his own teammates.

Power finished second in the championship race to a Ganassi driver three consecutive years, was fourth in 2013, and then finally won his only title in 2014 when he beat teammate Helio Castroneves.

Roger Penske allows each of his drivers to represent their teams and sponsors individually, and his drivers can race each other, but he draws that line at crashing into one another. Because he wants everyone to have a fair chance, any pre-race discussions about potential team orders for pole-sitter McLaughlin were brief.

“At the end of the day it was completely circumstantial. It’s pretty obvious what position you’re in if you do need to give up,” McLaughlin said. “I told Will before the race that I would fight him cleanly, and I think that’s all he expected.”

And although he was unaware Power was on the radio calling for a switch of the leaders, McLaughlin said he understood and would have understood if he'd been ordered to pull over. He led 104 of the 110 laps in a dominating victory.

“I’m a team player. I’ll do whatever I need to do, but for me I think the best thing we could do was win the race, either car. I think that’s exactly what happened,” McLaughlin said.

But if he'd been told to give away the win?

“Everyone knew that I would have been the true winner, so?” he said.