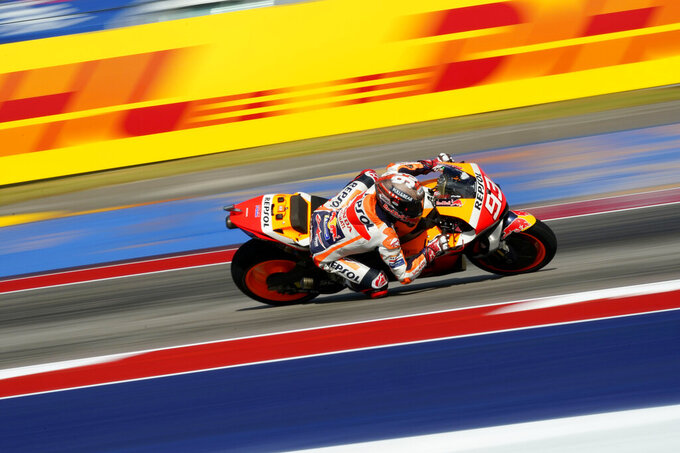 Marc Marquez (93), of Spain, steers through a turn during an open practice session for the MotoGP Grand Prix of the Americas motorcycle race at the Circuit of the Americas, Friday, Oct. 1, 2021, in Austin, Texas. (AP Photo/Eric Gay)

AUSTIN, Texas (AP) — Marc Marquez would love to find some of his old magic in America. He's on just the right track to do it.

The Repsol Honda rider and six-time MotoGP champion has dominated the Grand Prix of the Americas in recent years, with six victories in seven tries at the Texas track. But injury wiped out the Spaniard's 2020 season and his current racing form in a long recovery has him sitting ninth in the 2021 title chase, far adrift of points leader Fabio Quartararo of France.

“This season I'm suffering more than enjoying," Marquez said this week. “I'm ready to enjoy. ... If I enjoy it on the bike the results will arrive.”

Marquez usually has a romping good time in Texas. And given Honda's ability to deliver pure speed on a track that favors it, no one is counting him out of a return to the podium after Saturday's qualifying effort produced a front row start on Sunday at No. 3.

Marquez showed good speed for two days of practice and qualifying. He was denied an eighth consecutive pole position at the Circuit of the Americas only by a pair of blistering late laps by Ducati's Francesco Bagnaia of Italy and Quartararo.

Bagnaia, who won the previous two races, earned his third consecutive pole. His quickest lap was 0.348 seconds faster than Quartararo. The gap to Marquez in third was just 0.080 seconds.

Marquez's body wasn't ready for a season-long title fight, but he has shown he can muster enough pace and skill for a single race. He won the German Grand Prix, and was runner up to Bagnaia two races ago in a wild finish at the Aragon Grand Prix.

“My intention is to be there fighting for it,” on Sunday, Marquez said.

From 2013 to 2018, Marquez typically delivered a quick knockout punch in Texas, winning pole position and the race with ease each time. The 2013 victory was career win No. 1 of 57.

The only blip was in 2019 when a shocking crash opened the door to Alex Rins' first career victory. Marquez was all alone in front when a braking mistake at the end of the track's long straightaway sent him tumbling.

That crash was a hard bump in an otherwise dominant sixth championship. The real problems hit when he crashed in the first race of 2020, breaking a bone in his upper right arm that needed a titanium plate insert. It was a serious and tricky injury that still affects his ability to balance a heavy bike through corners.

A rushed and admittedly foolish attempt at a quick return the following week was quickly abandoned. More surgery and an infection forced him to miss the rest of the 2020 season as Spain's Joan Mir raced to the title.

Marquez has admitted there were times when he worried his arm would never be normal again, and that he fought to regain the confidence that he could race to win. He has crashed several times this season and finished on the podium just twice.

Marquez looked cautious Saturday when braking into the same corner where he crashed in 2019.

MotoGP didn't race in Austin in 2020 because the stop was canceled due to the coronavirus pandemic. Typically a spring event, this 2021 version was pushed late in the calendar and is just the series' third race outside of Europe since the pandemic started a wave of cancellations.

Races in Argentina, Finland, Japan, Thailand, Australia and Malaysia were scrapped this year. The Texas race comes just as Austin, which experienced a surge of summer and fall COVID-19 cases and hospitalizations, moved down a notch from its most severe levels of health warnings and protocols.

Quartararo will start Sunday with a 48-point lead over Bagnaia. After Austin, there will be three races left in the season.

Bagnaia and Quartararo have both sharply criticized the bumpy track conditions this week as a potential safety issue. The track surface has been a recurring problem for motorcycle racers for several years. The Circuit of the Americas was built to host the Formula One U.S. Grand Prix and also hosted a NASCAR race this year.

Quartararo noted he'll be looking to protect his lead without taking any big risks with the title so close in hand.

“Of course I’m on a tricky situation, I will not push over my limit,” he said.

Aprilia rider Maverick Vinales, who finished second in Austin in 2018, will not race this week. He's sitting out after the death of his cousin, Dean Berta Vinales, at a race last week in Spain.