Magnussen energized by unexpected return to Formula One 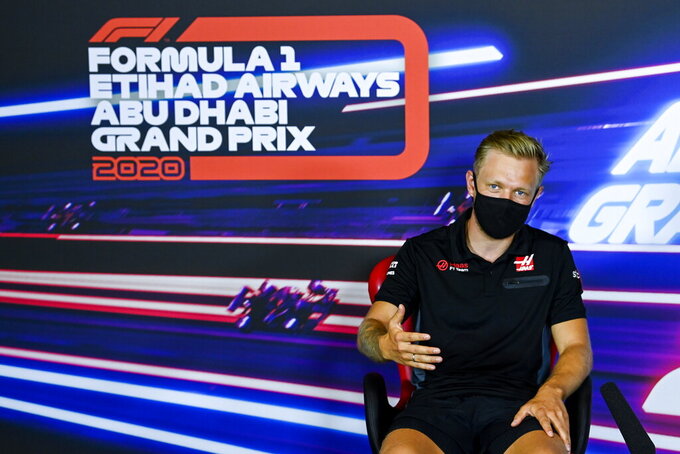 Kevin Magnussen was preparing to take a family vacation to Miami ahead of the 12 Hours of Sebring when the phone rang. It was his former boss, wondering if Magnussen wanted his old seat back in Formula One.

Of course he did, he told Haas F1 principal Guenther Steiner.

“He called me and I said ‘Yes’ immediately, straight away it was yes,” Magnussen said Thursday from Bahrain in a videoconference with reporters.

“And then, you know, these obstacles became quite clear. I have contracts with other teams. And all these thoughts, ‘Do I need this?’ But I felt that first initial feeling that I had when Guenther called that was so telling.”

And so the 29-year-old began the round of calls to unwind himself from his existing contracts so he could return to the American-owned Haas F1 team as the replacement for fired Russian driver Nikita Mazepin. Haas dropped both Mazepin and sponsor Uralkali, a Russian fertilizer company owned by Mazepin’s father. Dimitry Mazepin is a close associate of Russian President Vladimir Putin.

Team owner Gene Haas told The Associated Press he wanted an experienced driver to replace Mazepin, so the call went to Magnussen, who drove for Haas from 2017 through 2020.

Magnussen was scheduled to run Sebring next week with Chip Ganassi Racing and is supposed to be part of Peugeot's entry in the World Endurance Championship when the manufacturer finally begins competition. Magnussen also planned to return to the 24 Hours of Le Mans as teammate to his father, Jan, for a second consecutive year.

Instead, he's in Bahrain preparing to test Friday for the team that dropped him at the end of the 2020 season.

Haas chose to make 2021 a throwaway season in anticipation of this year's new car and favorable updated rules and regulations. Haas fired both Magnussen and Romain Grosjean, replacing them with rookies Mick Schumacher and Nikita Mazepin as Haas F1 became the worst team on the grid.

Magnussen and Grosjean both watched from the United States thrilled to be far removed from the Haas mess in F1. Grosjean found a new life in IndyCar, while Magnussen drove IMSA sports cars for Ganassi, Le Mans with his father and made one IndyCar start.

Magnussen said he'd become bored in his final years of F1 driving for a team not capable of winning races — Haas before it tanked was respectable but mid-pack — and he had no desire to return to cars incapable of racing for wins.

His tune had changed dramatically Thursday, when reserve driver Pietro Fittipaldi tested in the afternoon. Haas F1 missed the morning session because of a freight delay in its equipment; rival teams denied Haas' request for Sunday track time, and Haas is trying to get extended evening sessions Thursday and Friday.

“The reason I lost motivation at the end of 2020 was we'd been running pretty much at the back of the grid for two years and I wanted more,” Magnussen said. "I felt like I was getting better and better as a driver and the results weren't really coming. Even though its Formula One, it does get too frustrating if you're running at the back and you're not making progress.

“For this year there is a new set of regulations, completely new set of cars on the grid this for every team and hopefully it can be a bit of a fresh start and some surprises can come.”

Magnussen said there's been no discussion of Haas using him as a mentor to teammate Schumacher, the son of seven-time champion Michael Schumacher. The 22-year-old German is a budding superstar in need of a veteran teammate. Mazepin was also a rookie last season, and in addition to being jeered as “Mazespin," the Russian and Schumacher did not get along.

Mazepin noted that Schumacher did not reach out to him following his firing last Saturday.

Magnussen had a particularly close relationship to his Ganassi sports car teammate Renger van der Zande and their families spent much time together away from the track, with the Dutchman congratulating Magnussen's return to F1 as “we lost our favorite babysitter.” Magnussen said the relationships aren't the same in F1.

“Formula One is different to other forms of motorsports, sports cars especially, where you really are as a team with your teammates,” Magnussen said. “Formula One you are racing against each other. I think it is important to understand that you can benefit from each other but also important to accept that at the end of the day you also are racing for the same points.”