Leclerc blasts his own performance at Hungarian GP 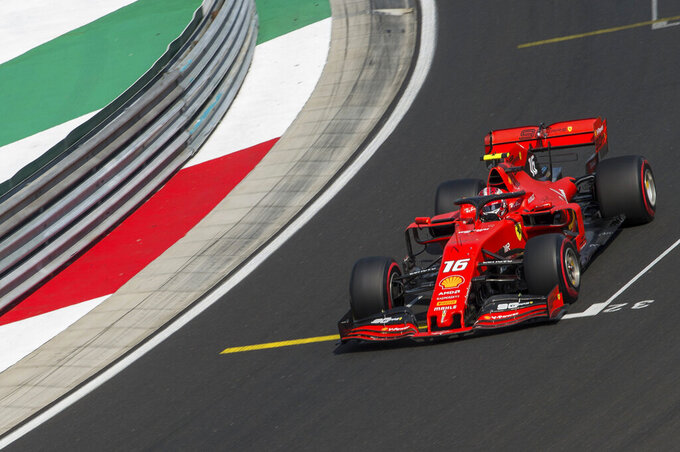 BUDAPEST, Hungary (AP) — Charles Leclerc was in unforgiving mood at the Hungarian Grand Prix on Saturday.

The Ferrari driver spun the car early into qualifying and slid backward into the crash barriers.

"I thought I was going to have to pull out," Leclerc said, reflecting on the incident. "(It was) a totally unnecessary mistake."

Although he recovered to qualify in fourth place for Sunday's race, and even briefly topped the leaderboard in an impressive final qualifying lap, Leclerc was ruthlessly honest in pointing out this was his second error in consecutive races.

During last weekend's rain-soaked German GP, he was in contention for a podium despite starting from 10th. But just as he was gaining momentum, he switched for quicker tires and crashed out, sliding off on a tricky tarmac section, going over the gravel and into the barriers.

"I need to understand. That's two mistakes from me in two races, which is not what I want. I need to work hard," said the 21-year-old from Monaco, speaking to TV reporters in his native French. "I didn't deserve a better car today considering the mistake I made in Q1."

Even though he has two pole positions and four podium finishes in his first season with Ferrari, the former Sauber driver has been extremely hard on himself at times.

At the Azerbaijan GP in late April, Leclerc was fastest in all three practice sessions and looked in imperious form. But then he crashed and could only qualify in 10th spot.

He was viciously critical of his mistake, particularly so considering he has only one season behind him in F1.

Leclerc is fifth in the overall standings, 21 points behind his Ferrari teammate Sebastian Vettel, a four-time F1 champion struggling to recapture his form.

Neither has won a race this season.

Leclerc arguably should have won in Bahrain — the second race of 2019— but had to settle for third place after being hit by a late engine problem when comfortably leading.

Again starting from pole at the Austrian GP on June 30, he finished second after being overtaken by rampaging Red Bull driver Max Verstappen late on.

Given that the Hungaroring is one of the hardest for overtaking — known in F1 circles as Monaco without the walls — Leclerc says he is "not very optimistic" about his chances of an elusive first win.

Verstappen starts from pole ahead of the Mercedes cars of Valtteri Bottas and world champion Lewis Hamilton, who leads the standings.

"The Mercedes and Red Bulls are too quick for us on this track and I think it will be quite a hard day tomorrow," Leclerc said. "Unfortunately we have troubles in the turns. We're quick on the straights but we slide a bit in the turns, so it means the tires will wear out more (and) it will make things more difficult."