Lamentation for sports in 2020: A year of living virally 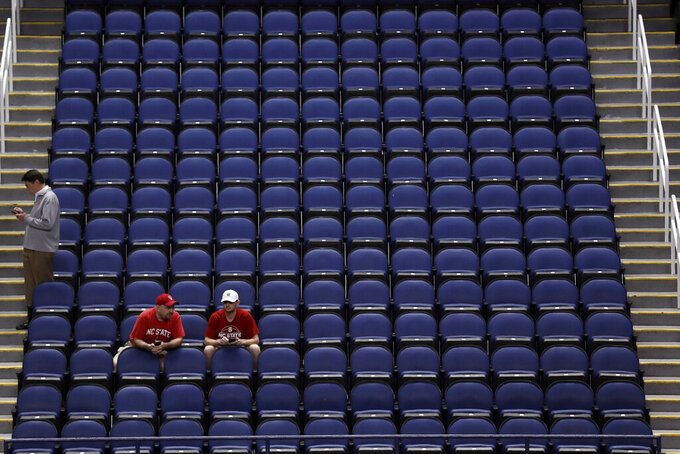 FILE - In this March 12, 2020, file photo, fans sit in a mostly empty Greensboro Coliseum after the NCAA college basketball games were cancelled at the Atlantic Coast Conference tournament in Greensboro, N.C. Scrubbing last year's March Madness due to coronavirus concerns cost the NCAA some $375 million, and another loss like that would have ripple effects throughout college sports. (AP Photo/Gerry Broome, File) 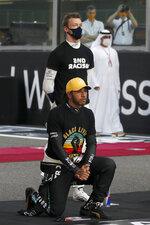 Well, had enough yet?

Don’t look at the score.

How bad did it get?

An omen, maybe. Hard to say.

The calendar flips, one quick turn

And then we’re mourning David Stern.

Hinch and GM are dumped by team.

Cora, Beltran are out the door.

Conor McGregor’s in the cage,

Fighting again, all fists and rage.

Just one voter omits his name.

Then in the California hills

The fog rolls in, the heart soon chills.

A chopper’s down: shock, disbelief –

Kobe, daughter and waves of grief.

A declaration: “Mamba out.”

At last a crown for Andy Reid.

Down Under, Novak has his way,

Bulks up his Grand Slam resume.

Pete Rose makes yet another plea:

The Astros were much worse than me.

Whirlwind’s coming we don’t yet see.

Pummeling Wilder to the bone.

Daytona ends in flames and fear

Staples Center fills to the hilt

For Kobe at the house he built.

But lost his sense of taste and smell.

Fans in Europe are kept away.

We then look up and turn around --

The house is burning to the ground.

The NBA shuts down its game.

In college sports it’s much the same.

But it’s soon gone, beyond repair:

The games not played, the crowds not heard,

The shots not made, the dreams deferred.

The NHL, with ample cause,

Decides to put the league on “pause.”

Masters forced to run for cover --

Kentucky Derby scratched for May;

Tokyo’s off, the Olympics done.

And no one cares about the ‘Stros.

Amid the chaos, doubts and fears

Fans are desperate, start to show it --

End of the world as we know it.

They don’t feel fine. They want some juice.

Need some action to get it on?

Then bet on baseball in Taiwan.

Try some arm wrestling on TV.

Filling the void till hoops restarts

Virtual sports help get us back

And NASCAR has the inside track.

The league shows off its high-tech craft

Roger Goodell in his basement.

Comeback plans for Fourth of July

Death on a Minnesota street

Turns up the volume, spikes the heat.

A time to march, a time to seethe:

Brought with all deliberate speed.

Osaka is, no need to ask.

Come the Open, it's on her mask.

NASCAR moves to another lane,

Bubba Wallace, all strength and pride,

Has drivers walking by his side.

A reckoning, and none too soon --

Even Goodell changes his tune.

We need, he says, to listen, feel.

The players now are free to kneel.

Missing from this good intention?

Kaepernick’s name, not a mention.

What’s in a name? Here’s something new:

Has Snyder found his moral core?

His sponsors simply said, No more.

By year’s end, wanting to do right,

Sports returns with the UFC.

Golf in Texas: Field is rested,

The Belmont’s empty, out of place

Makes a wish to wall off trouble.

Baseball’s back and the sport retools:

Cardboard fans (all gimmick and lark)

Who plays where is anyone’s guess.

College football’s the price to pay,

The risks too daunting to confront --

Weeks later, pressured, in a bind,

At Indy, Sato wins once more.

The silence drowns the engines’ roar.

Days of anguish and nights of rage.

The Bucks refuse to take the court --

A ripple then waves of support.

The NBA, of course, goes first.

How much longer? What does it take?

Doc Rivers asks, on being Black:

Why won’t my country love me back?

Sports pauses with a mournful heart:

With protests outside Churchill’s doors.

Landing where the Buffalo roam.

So much sports now, to say the least:

Baseball makes it through its season,

Leaving summer and into fall --

A Preakness filly makes some noise --

Seattle Storm can play some ball.

Sense Kobe’s there, above the rim.

As baseball puts its year to rest

(Their deal fell through for Connie Mack).

Dustin Johnson outplays them all --

Maradona, the Hand of God.

Across the week more games are strewn,

Even on Wednesday afternoon.

Through it all, a truth emerges:

Games go on while COVID surges

And records fall, that much is clear --

Then look who’s back? The NBA.

Seems you were here the other day.

But who can tell? It’s all a blur:

The games they played, the way we were.

Let’s see this out, get to the end,

And who knows what’s around the bend?

Take a deep breath and roll the dice.