Joey Logano in, tension for seven others in title qualifier 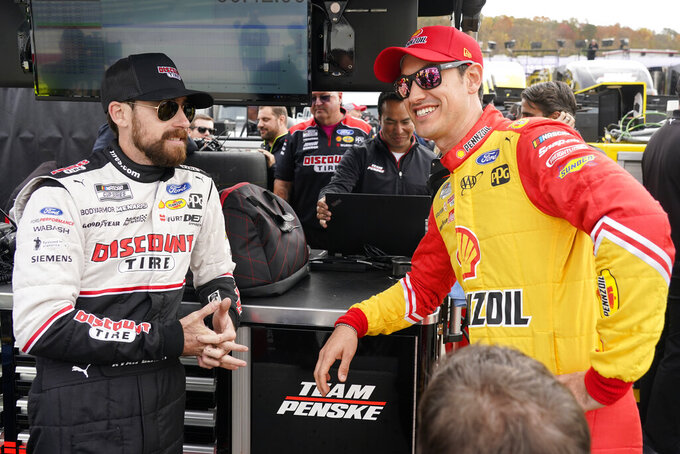 Joey Logano is in an enviable place.

As the only driver who has already secured a spot in the championship finale of NASCAR's Cup Series next weekend, he'll enter Sunday's race at Martinsville Speedway with a head start on preparations for the finale at Phoenix Raceway.

Seven others, however, will duel for the last three spots on the oldest and shortest circuit in the premier series, a 0.526-mile oval. Passing was difficult in the spring and contact is a given, and likely moreso with the highest of stakes on the line.

Chase Elliott is the only other former champion still in the mix for this year's title. He's third in points, eight behind Ross Chastain and six ahead of Hendrick Motorsports teammate William Byron, who won at Martinsville in the spring. Denny Hamlin, Ryan Blaney, Christopher Bell and Chase Brisco complete the field of contenders, with Hamlin possibly having an advantage.

He's won five times at Martinsville, but not since 2015, while Logano, Elliott and Byron have all won more recently at the track. Byron will be trying to become the first driver to win both races in a season at Martinsville since Hamlin in 2010.

Chase Briscoe is last among the eight contenders for the championship, 63 points behind leader Logano. He pretty much needs to win at Martinsville to make the title round.

He's not quite sure how that will affect his driving until the race is underway.

“I think it’s hard to say what you’re willing to do sitting here versus when you’re in the moment," Briscoe said in the media center on Saturday. "The emotions and adrenaline, everything is totally different than when you’re sitting here. ... I don’t know what you’re willing to do. I think it’s different for everybody and until you’re in that moment it’s hard to say. We’ve just got to go try to get a win.”

Martinsville is celebrating its 75th anniversary, and track president Clay Campbell couldn't be happier to be the last stop on the race to the championship final.

Like Richmond, which hosted its second weekend under delightful weather conditions, rather than sweltering heat typical of Virginia in mid-August the forecasts for Sunday suggest it will be a good day to sit in the stands and celebrate the anniversary.

“I love where I'm at,” Campbell said of the speedway's spot on the schedule. “Right now we’re in the 60s, around 70 degrees. So it’s a beautiful time for our area. And, you know, to be the penultimate race, I think it’s I think it’s a great time of the year."