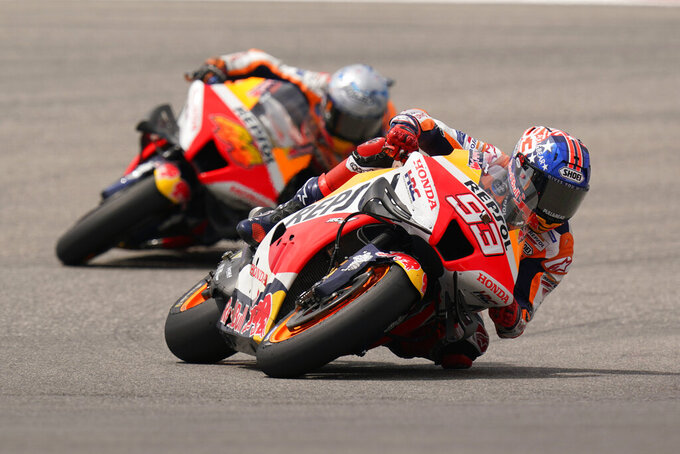 Marc Marquez (93), of Spain, leads Pol Espargaro (44), of Spain, through a turn during the MotoGP Grand Prix of the Americas motorcycle race at the Circuit of the Americas, Sunday, April 10, 2022, in Austin, Texas. (AP Photo/Eric Gay)

AUSTIN, Texas (AP) — The Beast is on top in MotoGP, with a win and the lead in the season championship.

Enea Bastianini of Italy, nicknamed “La Bestia,” passed Australia's Jack Miller for the lead with five laps to go and pulled away to win the MotoGP Grand Prix of the Americas on Sunday, claiming his second victory of the season and the lead in the title chase after four races.

And he did it on a track long dominated by Spain's Marc Marquez, who made a valiant ride to sixth in his first race back after missing the past two after a violent crash in Indonesia.

“There's a new sheriff in town,” Miller said, looking at Bastianini as the Italian donned the winner's black cowboy hat. “That's you.”

That made the Beast's smile even bigger. No fangs, just nearly perfect pearly whites.

“It's amazing for me, and in Texas, one of my favorites,” Bastianini said. “When I saw Jack in the first part of the race, I tried to win but didn’t know if I can.”

The 24-year-old Gresini Racing rider won the Moto2 championship in 2020 and joined the top series in 2021 with two podium finishes his rookie season.

Bastianini called the breakthrough victory in Qatar a special one for the team. Standing on top in Texas “is better for me because we know we are consistent and every race we are on the front.”

Bastianini started fifth as a group of Ducati riders, including Miller, dominated the top five spots and battled each other through more than half the race at the Circuit of the Americas, a track built for Formula One cars.

He finally grabbed the lead from Miller while braking at the end of the long straight before pulling away for the win. Miller would eventually fall to third as he was passed by Spain's Alex Rins on the final lap to earn Suzuki its 500th podium finish in MotoGP.

“He blitzed me down the back straight,” Miller said of Bastianini. “He’s a pocket man, very small and very fast on the straights.”

Bastianini is just the third winner in the nine-year history of a race long dominated by Marquez and his seven victories. The Repsol Honda rider returned to racing at one of his favorite tracks after recovering from a concussion and double vision problems caused by a hard crash in warmups for the Grand Prix of Indonesia on March 20.

Marquez had downplayed his chances of winning this week, but will look back at Sunday as a lost opportunity for what could have been a special return.

Marquez was fast in practice over the weekend, but an unlucky qualifying session left him starting from ninth. Then a horrible start dropped him all the way to last by the first turn.

Marquez looked stunned as the other riders raced away, and he looked over his right shoulder to see that indeed, there was no one left behind him. He then thundered through the field to finish sixth with a race effort that any other year probably would have won.

“We can’t forget that Marc’s had the last two weekends off,” Miller said. “Marc has been able to absolutely leg it here over the years.”

MotoGP returns to its European homeland in two weeks in Portugal, the first of 12 consecutive races on the continent and Europe's tighter, twistier tracks.

“We will see if we can repeat this result in the future. In European races I think the gap will be closer again,” Bastianini said.

Ten riders have finished on the podium over the first four races and five are within 19 points of Bastianini's lead in the championship.

“This championship is so long, anything can happen,” Miller said. “It's wide open.”