F1 proving to be a bruising experience for Lando Norris 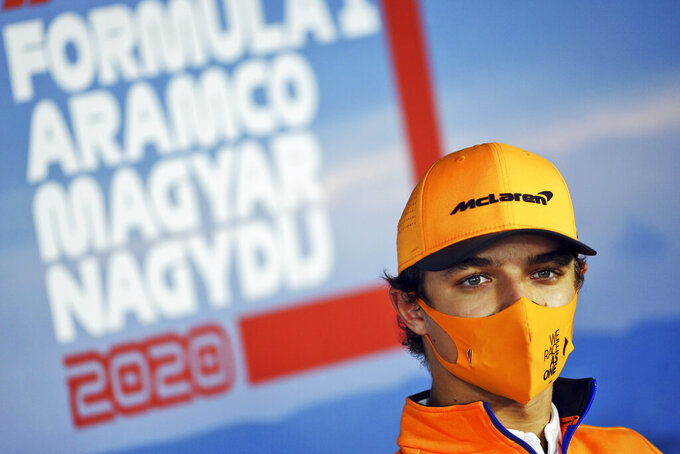 BUDAPEST, Hungary (AP) — Jumping back into a Formula One car after a long break proved to be a bruising experience for McLaren driver Lando Norris.

He flew back home to Britain for checks earlier this week after feeling chest pains at last weekend's Styrian Grand Prix in Austria, where he finished fifth to move up to third in the overall standings.

“I went back to the UK in the last few days to go and see some specialists and get scans and so on,” Norris said Thursday ahead of the Hungarian Grand Prix. "We diagnosed what the problem was. It’s not something that’s going to completely heal overnight but I’m much better than I was on the weekend.”

The F1 season was postponed four months because of the coronavirus pandemic, pushing it back from March to July.

Norris thinks that was the root cause of the pains, because after finishing an impressive third at the season-opening Austrian GP he started feeling some strange side-effects.

“It’s just bruising from being out of a Formula One car for so long and getting back into it straight into a race weekend and doing so many laps," he said. “After we did the first weekend I had a few days off in between and it then hit my body a few days after. (I was) a bit bruised and so on, but that was it."

In Austria, the 20-year-old became the youngest British driver to make the podium in F1 and the third-youngest overall behind Lance Stroll and Max Verstappen.

His impressive speed was evident when he also picked up a bonus point for the fastest lap in that race.

Heading into Sunday's race at the Hungaroring he sits behind the Mercedes cars of Lewis Hamilton and Valtteri Bottas, who leads the championship.