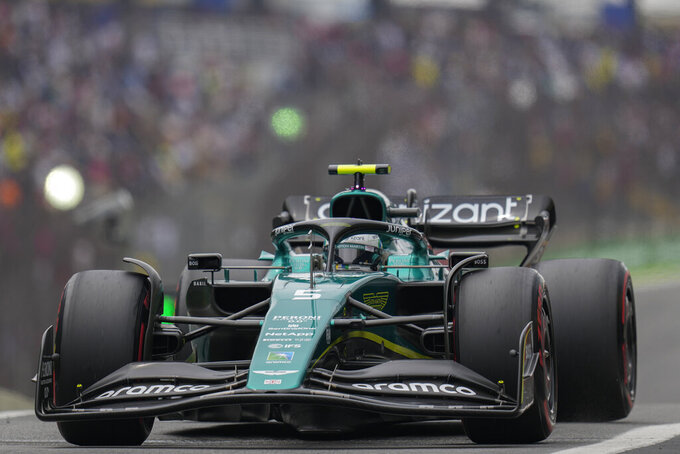 SAO PAULO (AP) — Formula One team Mercedes had a day to remember at the Brazilian Grand Prix on Saturday.

Alpine had a day to forget.

Mercedes driver George Russell will start Sunday in pole position after winning the sprint race at Interlagos — his team's first win of the season — with teammate Lewis Hamilton also in the front row, while Alpine drivers Fernando Alonso and Esteban Ocon had a high-profile clash on the track.

“It’s crazy to think we’re both starting on the front row," Russell said. “We’re in a luxury position where we can maybe split the strategy and go for the win.”

Seven-time champion Hamilton, who will race for the first time as an honorary citizen of Brazil, was also excited about the 1-2 start.

“This is an amazing result. So from there we should be able to work as a team and hold off hopefully the guys behind,” Hamilton said.

Max Verstappen will start in third place. He and his Red Bull team have already been crowned F1 champions.

Alonso tried to overtake Ocon on the opening lap. It didn't go well for Alonso who was later deemed by stewards to have been at fault.

“Just lost the front wing. Thanks to our friend,” Alonso said sarcastically on team radio. “He pushed me in Turn 4 and then finally in the straight. Well done.”

Alonso later had more to say on the clash — a lot more.

“Last year we saw this many times. This year he almost took me against the wall in Saudi Arabia, in Hungary. Now here,” the two-time F1 champion said. “I am already laughing about it.”

The 41-year-old Alonso is counting down the races.

“It’s one more race and then it’s over finally," said Alonso, who will compete next season for Aston Martin.

Ocon, who topped the afternoon's free practice, said it was “not the way one likes to finish a race” and gave his version of the clash.

“We need to work together. Alonso came from the outside and I touched him,” the Frenchman said. Asked about Alonso's comment, he replied: “That’s his opinion, my opinion is different.”

Stewards said Alonso was at fault for the incident, gave him a five-second penalty and dropped him to 18th place. Ocon will start in 17th.

On a day to forget for Alpine, Ocon’s car caught fire while being weighed.

“The whole bodywork is quite damaged, I don’t know what the consequences are going to be,” Ocon said.

Sebastian Vettel, who will retire at the end of the season, was more restrained in his reactions after Aston Martin teammate Lance Stroll closed a gap aggressively.

“I think today, in the end, we could have done better,” Vettel told Sky Sports. “Both of us.”

Hamilton finished third but will take advantage of a five-place penalty for Ferrari's Carlos Sainz, who ended second on Saturday. Sainz has added a new internal combustion engine for the weekend, a penalty-inducing sixth of the season.

Sainz's overtake of Verstappen included his right rear tire touching the Dutchman's front wing. The Ferrari driver agreed he was “on the limit” but said it was a fair move. The incident was not investigated by stewards.

"I’m sorry if I had a bit of contact, but that’s racing and sometimes you need to go for it if you want to make it stick,” Sainz said.

Haas driver Kevin Magnussen, who started in pole Saturday after topping Friday's qualifying, was eighth. He led the sprint race for only one lap.

The Brazilian GP is the penultimate race of the season ahead of Abu Dhabi on Nov. 20.