Architect of Jimmie Johnson's success starting over in 2019 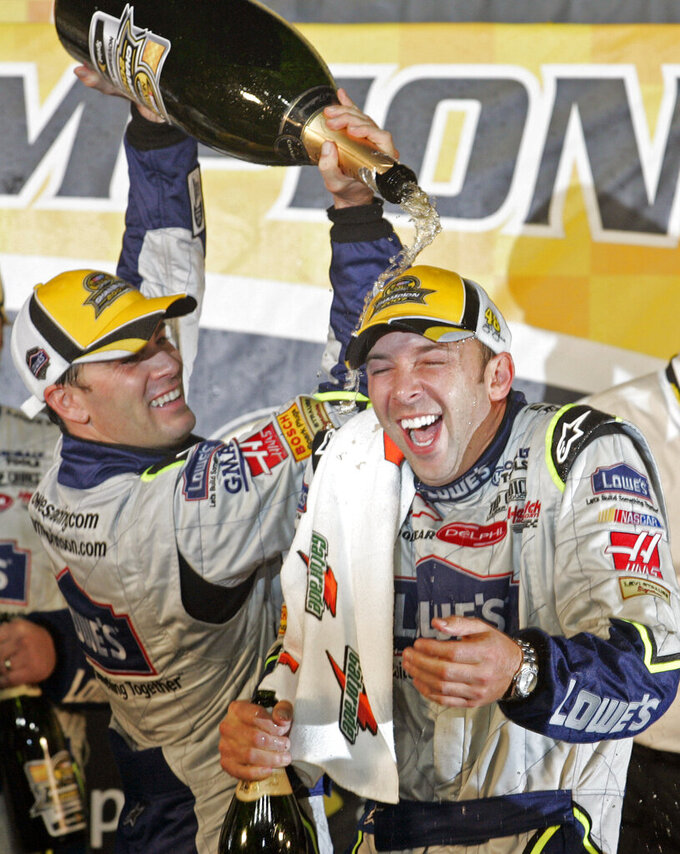 FILE - In this Nov. 18, 2007, file photo, Jimmie Johnson, left, pours champagne on crew chief Chad Knaus as they celebrate after winning the NASCAR Nextel Cup Series championship, in Homestead, Fla. Knaus, the winningest crew chief in the garage, is essentially starting over. He goes to the Daytona 500 as crew chief for second-year driver William Byron tasked with rebuilding the famed No. 24 team Jeff Gordon led to four titles. (AP Photo/Terry Renna, File)

DAYTONA BEACH, Fla. (AP) — Chad Knaus got his first big break at Hendrick Motorsports when he was picked to build a team from scratch around a rookie driver who had yet to prove he belonged at NASCAR's top level.

The driver was Jimmie Johnson.

Once Johnson was paired with Knaus as crew chief, the duo took off and won a record-tying seven championships as the No. 48 team blossomed into one of the best in NASCAR history. Despite a 17-year friendship and all their success, the strain of underperforming last year was the final push toward their split.

Their chance to race for a record eighth Cup title together is gone and each has new roles. Johnson will at last be the leader of the No. 48, a job he never had sole possession of under Knaus.

Knaus, the winningest crew chief in the garage, is essentially starting over. He goes to the Daytona 500 as crew chief for second-year driver William Byron, tasked with rebuilding the famed No. 24 team Jeff Gordon led to four titles.

Knaus started at Hendrick as an early member of Gordon's "Rainbow Warriors" crew. His mentor was Hall of Fame crew chief Ray Evernham and Knaus aspired to one day lead that team. He left Hendrick briefly to gain experience outside the organization and when he returned it wasn't for his dream job. Knaus instead was named head of a team that didn't yet exist and it was his job to build it around Johnson.

Knaus, wound tight with a laser-focus, led Johnson to victory lane by the 10th race of his rookie season and they were championship runner-up the next two years. But when they lost the title in 2005 and Knaus' intensity became too much for Johnson, team owner Rick Hendrick made the pair sit down over milk and cookies to either resolve their differences or be split up.

Johnson and Knaus came to a resolution and reeled off a record five consecutive titles, then added two more in 2013 and 2016 to join Richard Petty and Dale Earnhardt as seven-time winners. Johnson won 83 races in Knaus-built Chevrolets and a pair of Daytona 500s, but as the Hendrick organization struggled last year, the No. 48 team failed to win a race for the first time since it launched in 2002.

Hendrick, deciding the relationship had grown stale, seized the opportunity to make a change.

He returned Knaus to his roots with the No. 24 team and gave him Byron, a wide-eyed, fresh-faced 21-year-old driver in need of a seasoned crew chief.

"William is very structured and very committed and a lot like a sponge," Hendrick said. "He's probably as smart as anyone I've met in the sport, very quiet, very focused and very much wants to learn. Chad is a real technician with the car, very outspoken, and William has asked for that and asked for some commitment and structure."

The change comes at a pivotal time for Knaus, who is far more than a crew chief chasing championships. He was a bachelor for most of his time with Johnson but is now married and last year welcomed his first child, son Kipling. Having a wife and child has mellowed Knaus while giving him interests away from the race car.

Knaus is only five years older than Johnson and the two grew up in the Cup Series together. With Byron, it's a totally different dynamic.

Byron grew up in Charlotte, North Carolina, and used to stop at Johnson's house on Halloween to collect candy. Now he has Johnson's prized crew chief, who comes with a reputation as a relentless taskmaster who demands perfection from his team.

"His experience level is really high, his work ethic is really high, but he's not, like, set in is ways," Byron said. "That is what I have noticed about him — he's open to do new things."

"It looked a lot like 2001 to me," Hendrick said. "Chad's life did change, he's got a baby now and he's got other things in his life, too, but he's also got something he wants to prove."

Knaus said he is rooting for Johnson and new crew chief Kevin Meendering, and the quest for an eighth title won't become a rivalry.

"Obviously I would have loved to have done that with Jimmie. That is going to be painful in one respect, but I will be proud as heck of the guy," Knaus said. "Everybody is like, 'Man are you going to get the first win? Or is Jimmie going to get the first win?' Who cares? Who cares as long as we are both going out there, we are having a good time, we are racing and we are being successful. I'm not worried who gets the next one. I'm worried about remembering what it is we accomplished, what we did for 18 years, I think that is the most important element in this whole dynamic."