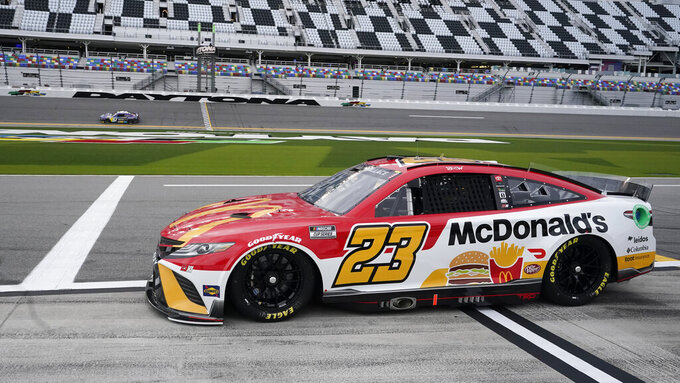 That's what former FBI supervisory agent Stanley Ruffin tells viewers in “RACE: Bubba Wallace," a Netflix docuseries that chronicles the only Black driver at NASCAR's top level and his professional rise and personal role in social justice issues. The series is targeted to a non-NASCAR audience unfamiliar with Wallace's emergence or the facts surrounding the noose found in his garage stall at an Alabama track.

Wallace had successfully called on NASCAR to ban the Confederate flag at its events in June 2020. Two weeks later, NASCAR told Wallace a noose had been discovered in his assigned stall at Talladega Superspeedway.

The incident occurred at the height of a national racial reckoning following the murders of Black men George Floyd and Ahmaud Arbery. Wallace felt compelled to take a public position for the first time in his life — he was 26 years old, NASCAR's only fulltime Black driver, and although he drove for icon Richard Petty, Wallace was an underperformer seeking his first career Cup Series win.

The FBI investigated and determined the noose had been in that garage stall for months, since the unit had last been used. Wallace was not the victim of a hate crime.

He faced national ridicule — then-President Donald Trump accused Wallace of perpetrating a hoax — even though Wallace did not discover the noose or even see it. Wallace was accused of orchestrating the entire incident to boost his career.

"Mr. Wallace had nothing to do with the placement of that noose,” Ruffin, who led the investigation, says in the docuseries that debuts Tuesday, two days after the season-opening Daytona 500.

The six-episode series directed by Erik Parker documents Wallace's life and ultimate shift into a change agent willing to use his voice and platform. Wallace wanted a show — he had asked for Netflix to create something like its “Drive to Survive” behind-the-scenes Formula One show — to chronicle his first year driving for 23XI Racing.

Wallace learned the project had to include his tumultuous 2020.

“I just wanted to go race,” Wallace said. He told The Associated Press that “I was a pain in the ass," to Parker as the director tried to focus on 2020.

Wallace exploded in exposure and pulled in millions of dollars in new sponsorship during 2020 and he parlayed it into the job of a lifetime. The funding helped Denny Hamlin and Michael Jordan launch 23XI, and Wallace wanted to chronicle what he believed was his best chance to earn his first career Cup victory.

“I wanted that to be documented,” Wallace told AP. "And I wanted people to see what it takes to be successful at this level and how hard it is... I wanted to showcase what it's like inside the mind of me going into these races.

“But, the other side of that is the off-track stuff. How Bubba Wallace got his household name off the racetrack was everything from 2020. That was Erik's path, he wanted to capture the history side of things and I am focused on the racing side. It created an interesting dynamic there.”

Parker relies on Wallace in “RACE” to recount the emotional roller coaster of Talladega, from the discovery of the noose to Wallace earning his first career victory 15 months later at the same track.

NASCAR President Steve Phelps alerted Wallace to the noose, and the driver included his estranged father among the first phone calls made. Their relationship has been strained since his parents' 2016 divorce, a theme touched upon as the possible root of Wallace's admitted struggles with depression.

“They found a noose,” Wallace recounted telling his father.

“You got a gun?” Wallace said Darrell Wallace Sr. replied.

“I can see where somebody like Bubba, he was trying in his mind to move on to the next day, he's already gone past that,” Parker told AP. “So getting him back, it always felt like dragging him back to the past, while he's running to the future. It wasn't all easy, but it was an important endeavor.”

That was Wallace's attitude Wednesday at Daytona International Speedway, where he deflected questions about his race.

He's still the only Black driver at NASCAR's top level, but 34-year-old Jesse Iwuji, a lieutenant commander in the Navy Reserve, will become the second fulltime Black driver this season with plans to run in the second-tier Xfinity Series.

Iwuji co-owns his team alongside Pro Football Hall of Famer Emmitt Smith, who enters NASCAR a year after Jordan and entertainer Pitbull joined the ownership ranks. Floyd Mayweather has a car that will attempt to qualify for the Daytona 500, as does NY Racing, a team owned by Black entrepreneur John Cohen.

When the season opens Sunday with the Daytona 500, Cup Series race director Jusan Hamilton will become the first Black race director in the long history of NASCAR's biggest event.

McDonald's, one of Wallace's sponsors, announced a streetwear line Wednesday in collaboration with the driver and 23XI. Proceeds from the 10-piece collection will benefit the 23XI Speed Institute, a development program focused on diversity, equity, and inclusion efforts in motorsports.

Hamlin said the McDonald's line is part of 23XI's desire to push boundaries and beyond the NASCAR norm — a directive from Jordan himself.

“I think it was very important for our team in general to just be different," Hamlin said. "I guarantee that this drop of this special (McDonald's) collection will get eaten up very, very quickly, probably by the younger demographic, and next thing you know you have people wearing NASCAR gear again.”