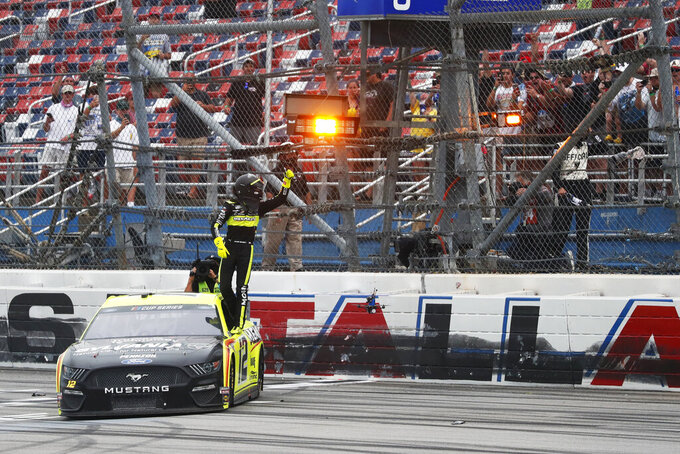 This is NASCAR in 2020: An opening weekend that had a visit from the president and a death-defying crash. A pandemic-forced hiatus that drove the virtual racing popularity boom. Empty grandstands. And suddenly, perhaps surprisingly, a prominent role in the push for racial equality.

All with the second half of this unusual season still to race.

The stock car series was a pleasant diversion when it resumed in May, for a while the only North American sport to broadcast a live product each week on national television. Even without fans in the early going, racing was back.

The past two weeks have been something else entirely: NASCAR has been dominated by matters of race and racism, not unlike the nation as a whole. Those empty stands did more than put a hearty dent in the bottom line as tracks open for business: They have temporarily staved off some difficult challenges when fans return, including any enforcement of the series' new ban on the Confederate flag.

“That is not something that’s going to be accomplished overnight,” said former NASCAR consultant Ramsey Poston, now president of communications firm Tuckahoe Strategies. “The sport will want to look forward to how they continue to invest in things like the Drive for Diversity program. How do they attract new fans to the sport? How do they continue their effort to diversify their sport from the track to the executive suite?

“I know the sponsors in the sport are eager for this to happen,” Poston said. "They can work together with the partners and their sponsors to make this a reality.”

NASCAR will eventually have to wrestle with whatever headaches are caused by the stubborn Confederate flag holdouts once the gates are again open to all fans. They could get a taste of things next month when 30,000 fans will be allowed at the All-Star race at Bristol Motor Speedway in Tennessee.

But at least the cash will flow then in a sport in desperate need of it. At Pocono Raceway this weekend, fans are again barred from attending, putting a severe crimp on the balance sheet without the hard-core base on hand to splurge on tickets, food, drinks and merchandise.

TV money can sustain a track even without fans lining up for $16 beers. Race hosts receive 65% of NASCAR’s $8.2 billion, 10-year television package and that accounts for most of what tracks bring in.

For example, Dover International Speedway is a publicly traded company and filings showed its two NASCAR weekends in 2019 made about $24 million -- after prize money was subtracted -- with admissions providing just under $5 million and sponsorships, concessions and merchandise sales topping $6.5 million.

“Sixty to 70% of our revenue is being driven by our broadcast fees and I’m guessing that the other venues would probably be in the same situation as we are,” Dover International Speedway Inc. President and CEO Michael Tatoian said.

Still, without fans, there’s no juice to the weekend and there are few sights in sports as depressing as a half-empty NASCAR track on race day. Scores of tracks over the last few years have ripped out seats and downsized as NASCAR’s popularity waned.

Tracks lose more than beer money with an empty facility. There are lost chances for data collection and marketing and sponsorship opportunities dry up. There is, of course, savings on operations and logistics.

As long as the TV money can prop up the series, NASCAR will get by, even as it goes through this season without a title sponsor.

The potential of what’s ahead came Monday when a small number of Black fans rushed the fence and cheered for Wallace after he finished at Talladega. If the last fans from a bygone era refuse to come to the track, NASCAR must hope a new, diverse generation is set to blossom and connect with the sport. Much in the way it took the death of Dale Earnhardt to spark meaningful changes in driver safety, the events of the last few weeks could help NASCAR strike during the national reckoning over racism and emerge a leader in diversity.

“I think we need to encourage more fan participation, which I think will be a lot easier to do, seeing how we don't have the Confederate flag and those types of things in our mix," said Brad Daugherty, the lone black owner in the Cup Series. “I've always talked more bringing more young kids of color to the race track. Letting them come, see, touch, be around these race cars. I think as NASCAR continues to evolve as a sport, a company and a culture, just having more opportunity and more access to the sport is what it's truly about.”