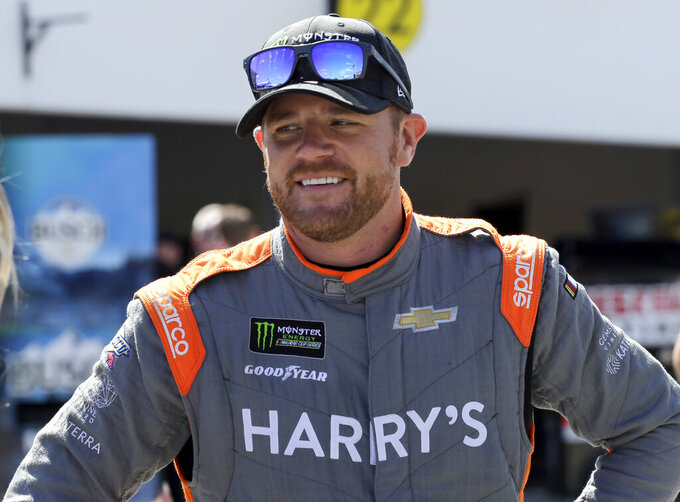 FILE - In this Saturday, Feb. 17, 2018, file photo, Justin Marks walks through the garage during practice for the NASCAR Daytona 500 Cup Series auto race at Daytona International Speedway in Daytona Beach, Fla. Chip Ganassi has sold his NASCAR team to Justin Marks, owner of Trackhouse Racing, and will pull out of the nation's top stock car series at the end of this season. Ganassi fields two cars in the Cup Series but will transfer his North Carolina race shop and all its assets to Marks for 2022. “He made me a great offer that required my attention,” Ganassi told The Associated Press on Wednesday, June 30, 3031, as the sale was announced (AP Photo/Terry Renna, File) 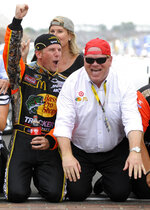 CHARLOTTE, N.C. (AP) — Immediately after the bombshell announcement that Justin Marks had purchased Chip Ganassi's NASCAR team, the outgoing owner took the soon-to-be new boss back to the shop to address a room full of anxious employees.

“It was important to me to get in front of people and look them in the eye," Marks told The Associated Press. "I told them, ‘I am here because I love racing and there are a lot of good things happening in this building and I am going to work hard to preserve as much of that as possible.’”

The work begins next week for the co-owner of Trackhouse Racing, who struggled to find a charter for the team's first year of competition and balked at paying the escalating costs of NASCAR's equivalent of a franchise. Kaulig Racing last month bought a pair of charters for what the industry believes to be at least $10 million apiece, and after crunching the numbers, Marks just couldn't justify the spend.

So he switched his strategy, looked at the marketplace and took his shot: Marks picked up the phone and cold-called Ganassi, the Pittsburgh-tough owner not known for suffering fools gladly. After 20 years in NASCAR with a team that never really reached the level of Ganassi's successful IndyCar and sports car programs, Marks wondered if Ganassi was willing to cash out.

Ganassi said Marks made him “an offer that required my attention” and it culminated with Wednesday's announcement that Trackhouse Entertainment Group had bought him out of NASCAR.

Marks' deep dive into the Ganassi operation begins next week when he works from the Concord shop. The one-car Trackhouse team with driver Daniel Suarez is currently aligned with Richard Childress Racing and Marks told AP that Trackhouse has only “about 25” of its own employees.

He'll need a larger workforce to field two cars next season, one for Suarez and the other Chevrolet for a driver to be named. Kurt Busch and Ross Chastain, the current Ganassi drivers, are both under consideration but its been speculated that Busch will take sponsor Monster to 23XI Racing next season to help Denny Hamlin and Michael Jordan expand their team.

“My goal is to retain as much of the good working groups in that company as possible. There are good people in the company,” Marks told AP on Friday. “Everything inside that building is in place to run a successful company.”

The introduction of NASCAR's Next Gen car — designed to be affordable because spec parts will be mass-produced by outside companies — will reduce labor within all race teams and inevitably lead to attrition inside the Ganassi shop.

“The new car is going to change the workforce structure,” Marks said. "We have to look at the best way to build a company around a new car and I want to fill in as many of those positions with Chip Ganassi people.”

Just like that, Marks is major player on the NASCAR scene.

So how did a 40-year-old former racer buy himself a seat at the table alongside Rick Hendrick, Roger Penske, Joe Gibbs and Jack Roush?

He launched Trackhouse with Suarez as the driver and leased his charter for this season after he was outbid on four others. Marks then introduced entertainer Pitbull as co-owner of the team, which Marks hopes to relocate to Nashville, Tennessee, by 2023.

Trackhouse has many core principles ranging from success on the race track to connecting with the Latino market and making an impact on youth in America’s minority communities.

Marks is the first to admit he should have turned in his firesuit and helmet much earlier and shifted his focus toward his burgeoning motorsports portfolio. Marks raced in all three of NASCAR's national series — and won an Xfinity Series race driving for Ganassi in 2016 — and scored nine sports car victories in 67 starts. His final win in 2019 was while driving for Indianapolis 500-winning owner Michael Shank.

Marks' financial start likely came from his father, Michael Marks, a well-known executive, founding managing partner of Celesta Capital and former minority owner of the Golden State Warriors. But Marks has been building his own portfolio, which includes the GoPro Motorplex karting facility in Mooresville that is modeled after a historic kart track in Parma, Italy.

“I've been positioning myself from a capital standpoint for something like this for several years,” Marks told AP. “I was just waiting for the right moment. Yeah, I'm a former race car driver, but if anything I probably raced for too long.”

A nondisclosure agreement prevents Marks from discussing specifics of the Ganassi purchase, but if Matt Kaulig paid $20 million-plus just for a pair of charters, then Marks at minimum paid at least double for Ganassi's entire NASCAR organization. The purchase did not come with the Concord race shop, which is owned by Ganassi partner Rob Kauffman, who will lease the building in 2022 to Trackhouse.

But the nuts and bolts all transfer to Trackhouse, including existing employee contracts. When asked how he is paying for the purchase, Marks said he was legally bound not to discuss the details.

“Every entity has different financing, sometimes there is debt involved, sometimes it is investment," he said. “I think everybody is excited about the new blood coming in to the sport, the new ownership, and change is obviously scary for people. But I'm here for the right reasons. I'm here because I love racing.”