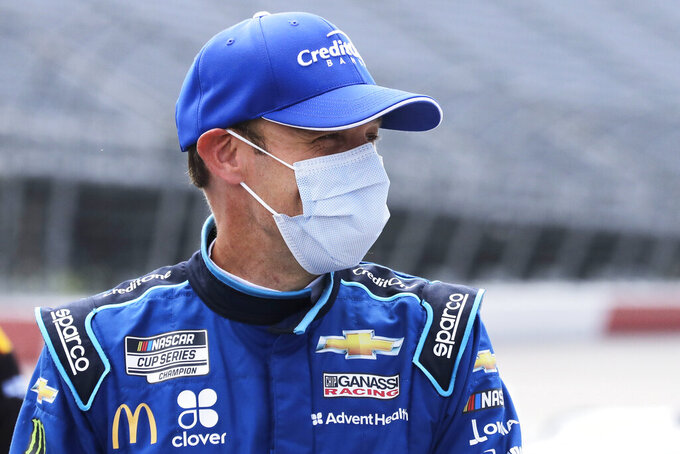 DARLINGTON, S.C. (AP) — The win by Kevin Harvick in NASCAR's return to racing over the weekend was a bit predictable considering the enormous task teams are facing in a flurry of rescheduled events.

The initial rollout of four Cup Series races over 11 days requires a grueling effort by teams, who are working in split shifts or alternative methods to maintain social distancing while preparing cars for the return. Shops were shuttered for roughly two months during NASCAR's 10-week shutdown, so the workload is high.

The deepest teams are going to adapt best and Harvick's team at Stewart-Haas Racing typically rises to various challenges. Harvick, a former series champion and former winner at Darlington Raceway, was also the points leader through the first four events. He has finished ninth or higher in all five events with Sunday night's victory the 50th of his career.

He will try for the sweep when NASCAR returns to Darlington for its first Cup race on a Wednesday since 1984, when Richard Petty scored his 200th and final victory. This anticipated midweek race is just 300 miles — 100 fewer than Sunday's return race, and the same distance as next week's junior series Xfinity Series race at Charlotte — but still will start a test of stamina.

The Cup Series will race for a third time in a week this Sunday in the Coca-Cola 600, the longest race on the schedule.

“We should be pretty fresh from the physical standpoint,” said Harvick. "I’ve been working hard to make sure I was in as good a shape as I’ve been in in a long time coming back.

“The biggest thing is 300 miles for us is a short race. I think as you look at the weather, being at night, it’s going to be fairly cool. The 600 miles the next week will be the one that you really have to pay attention to. Hydration is the key for me.”

NO CONCERNS ABOUT KENSETH

Matt Kenseth showed no signs of rust in his return after more than 15 months out of a race car.

Kenseth got back into a Cup car for the first time since the 2018 season finale and finished 10th at Darlington, one of the most technical tracks on the circuit. Because NASCAR is holding races as one-day events to meet health protocols, there is no practice or qualifying.

So Kenseth got into a Chevrolet Camaro, a car he'd never raced before at the Cup level with no experience at all in NASCAR's current aerodynamic package, and pulled off an eye-popping, top-10 finish.

Not bad for a guy who was in his second year of retirement and training to run the London Marathon when Chip Ganassi asked him to replace fired driver Kyle Larson.

“I was definitely anxious when they were getting ready to throw the green ... once we got into that second restart and ran three or four laps, I really felt pretty comfortable," Kenseth said.

Kenseth said navigating pit road is among the minor issues he still needs to find a rhythm for because “there are some things that when you’re out for a while you just aren’t as sharp on as when you left. I felt really good physically.”

Reddick, coming off back-to-back Xfinity titles, was seventh for Richard Childress Racing. Childress has said the 24-year-old is like ayoung Cale Yarborough.

Nemechek was ninth in the first top-10 finish for Front Row Motorsports at a track other than Daytona or Talladega in three years.

NASCAR is willing to try fresh ideas as it tries to survive the financial blow of the shutdown. For Darlington, that means the field Wednesday night will be inverted at the start based on Sunday's finishing order.

The inversions were in groups and the first inversion flipped 1st to 20th. So Ryan Preece gets the pole while Harvick will start 20th.

Seven-time champion Jimmie Johnson took the biggest hit in this system following a 38th-place finish. Johnson crashed while leading on the final lap of the first stage and will start 37th on Wednesday.