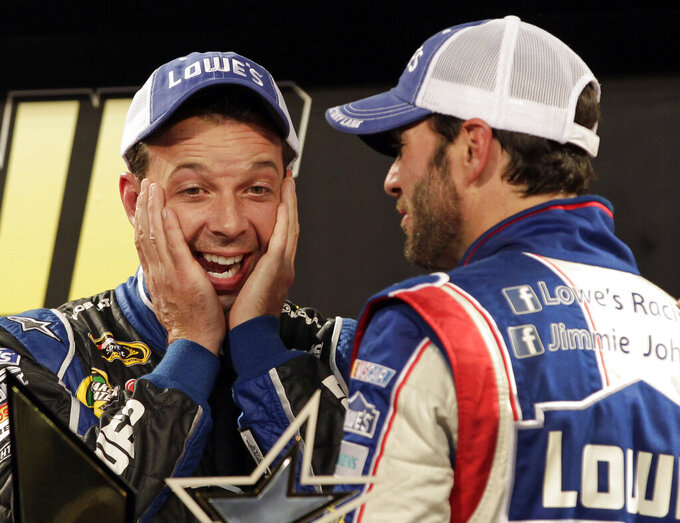 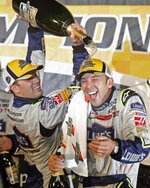 AVONDALE, Ariz. (AP) — There will never be another NASCAR combination like Jimmie Johnson and Chad Knaus. They built the No. 48 together and dominated the sport for more than a decade.

Johnson and Knaus won a record-tying seven championships, including a stretch of five straight, and Johnson’s 83 Cup victories rank sixth all-time. Although they were split at Hendrick Motorsports in 2018 after an unprecedented 17 seasons, they both retire after Sunday's season finale at Phoenix Raceway.

Johnson will run a partial IndyCar schedule next season and find new forms of competition. Knaus is moving into an executive role at Hendrick Motorsports to spend more time with his young family.

“It's a legacy and you want it to go on and on and it just can't,” Rick Hendrick said.

Johnson was a little-known California driver who somehow convinced Jeff Gordon to vouch for him with Hendrick. He was popular among the younger drivers but had won next to nothing of national importance at the time. In fact, Johnson was most recognized for a bruising 2000 crash at Watkins Glen in which he climbed from the wreckage and threw his arms in the air in triumph.

Knaus was a highly motivated crew chief developed inside the Hendrick factory under Hall of Famer Ray Evernham on Gordon's celebrated “Rainbow Warriors” crew. He briefly left Hendrick for four seasons to continue climbing into his dream job, but Hendrick summoned him back before the 2001 season to build the No. 48 around Johnson.

Johnson and Knaus were the longest paired driver and crew chief of their generation, sticking together even after bickering between the two nearly led to a 2005 split. Hendrick ordered them to air their grievances over milk and cookies because he believed both were acting like children.

They lasted through the 2018 season, two years after they won the record-tying seventh championship but in the middle of a losing streak that Sunday will stretch three full years. Johnson's last victory was the 2017 season finale that clinched his final title.

“They were like brothers. In the very beginning, Chad had that drive to push Jimmie. And then Jimmie became a champion and it wasn't the same relationship,” Hendrick explained. “Jimmie was like ‘OK, I’m a seven-time champion. I want to run this team now.

“They had success and they had a friendship. Even though they fought like cats and dogs, they loved each other.”

Each taught the other valuable lessons that worked at the race track and in their personal lives.

Knaus was so hard-wired for so long — he famously dropped his race notes as Johnson crossed the finish line on a championship and rather than celebrate Knaus furiously gathered his strategy sheets — that his personal life took a definitive backseat. He chased winning, exclusively, and only in the last few years has he opened his life to more than racing.

Knaus is now 49, the married father of two very young children. If not for Johnson, Knaus may never have found personal happiness.

“He definitely taught me to enjoy life a little bit,” Knaus said. "He taught me what it means to feel friendship and love and to care for somebody, which is something that I needed, for sure.

"Jimmie loves with his whole body, right? He taught me what it’s like to want to have a family and to build a good family and how to be a good father. So, I’m trying to follow in some of those footsteps from him.”

Johnson credits Knaus for building his confidence and teaching him how to become a champion and what it takes to reach that level.

“He taught me what I was capable of, got me through my own self-doubt, my own (crap),” Johnson said. "He pushed me through those things and helped me find who I was on the other side. It wasn't always easy, but his pressure pushed me to better.

“He pushed me in areas where I wasn't all that developed or comfortable, and I've pushed him, but to be more compassionate, more understanding, thoughtful, to be caring of people. Relationship capital is the glue that holds the technical pieces together.”

There will always be some who fervently debate if Johnson would have been successful without Knaus, if the crew chief won because the driver was so focused, or if the Hendrick equipment was just better than everybody else in NASCAR. Hendrick says all three made the No. 48 the best of its time.

“The combination of the two of them were really good,” Hendrick said. “I mean, probably the best combination the sport’s ever seen.”