Indianapolis could welcome back fans for Brickyard weekend 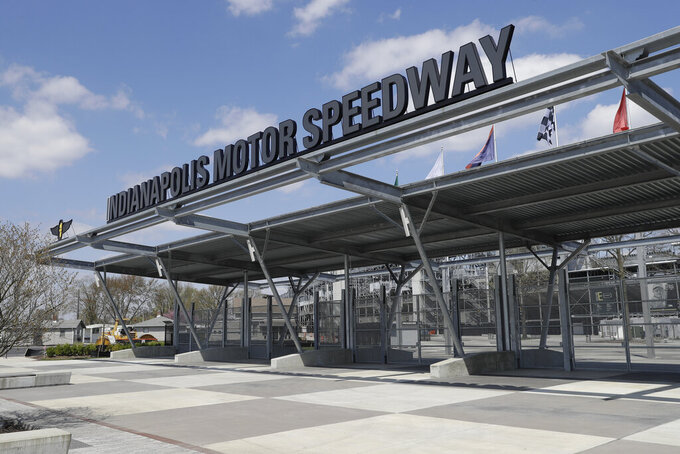 An entrance to Indianapolis Motor Speedway is viewed Saturday, April 18, 2020, in Indianapolis. The speedway is closed due to the coronavirus pandemic. (AP Photo/Darron Cummings)

INDIANAPOLIS (AP) — Indianapolis Motor Speedway could be the first major sporting venue to have fans back in the stands this summer.

Indiana Gov. Eric Holcomb announced a five-stage plan Friday to reopen the state with the final phase tentatively scheduled to include a return to sporting venues on July 4 — the very day an IndyCar-NASCAR Xfinity Series doubleheader is scheduled to be run in the sprawling track.

Holcomb said social distancing guidelines will remain in place through at least race weekend, but it will give one of the world's most iconic sports facilities the potential to be one of the first events to welcome back fans.

Mark Miles, who oversees the IndyCar Series as president of Penske Entertainment Corp. president, said other precautions also may be taken though it's too early to provide those details.

The plans still could change if there's a resurgence of COVID-19 over the next two months.

“We'll have to continue to plan on two tracks," Miles told The Associated Press shortly after the announcement. “The phases and their exact dates could change depending on the situation with COVID-19. So I expect that we'll go ahead and plan with both scenarios and maybe have to make a final call one way or another before we get to July 3rd or 4th. But we'll be ready for either eventuality."

It's been a busy few months since Roger Penske purchased the track and the IndyCar series, a deal that closed in January. When the sports world started shutting down March 12, following the lead of the NBA, Penske and his team went to work on contingency plans.

They moved the track's marquee event, the Indianapolis 500, from its traditional Memorial Day weekend slot to Aug. 23. They also announced IndyCar's other May race, the GMR Grand Prix, would be rescheduled for July 4 as part of a Saturday doubleheader with the Xfinity's Pennzoil 150. Both will be held on the track's road course.

NASCAR's Brickyard 400 is still set for its original date of July 5 on the historic 2.5-mile oval.

All along, race organizers hoped they'd be racing in front of fans.

“There's a real chance of that. Nobody I think has an exact ability to forecast what happens," Miles said when asked about possibly being the first sporting event in front of fans. “It's a real possibility we could be the first, the first NASCAR race with spectators. With IndyCar, we're hopeful we may have spectators before that."

NASCAR is resuming its season May 17 at Darlington Raceway in South Carolina, the first of seven events in May for the stock car series — all of them without fans. Miles still believes IndyCar can hold its delayed season opener June 6 at Texas.

It is unclear exactly what social distancing might look like at IMS, a facility that draws upwards of 275,000 people for the Indy 500, the world's largest single-day sporting event.

In recent years, Brickyard weekend attendance has waned. Last year's estimated crowd of 60,000 was an improvement over 2018, and with approximately 235,000 permanent seats at the speedway, there could be plenty of space for public health officials to assure fans it will be safe to attend.

“Obviously, I’m a promoter at heart and when you promote things they work better when you have fans," speedway President Doug Boles said, noting NASCAR officials also would be included in preparations. “Mark has really instructed us to think about what the race season looks like and what NASCAR weekend looks like, so we have started to look at that and the good news is if your going to social distance there's no better place than the speedway."