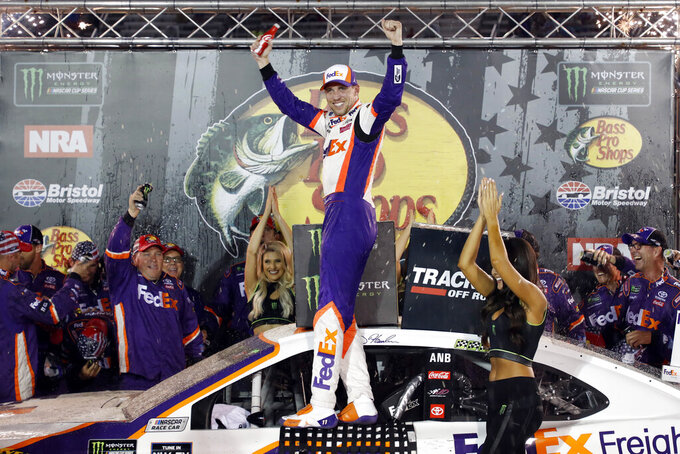 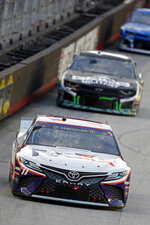 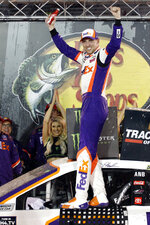 BRISTOL, Tenn. (AP) — The winner climbed from his car and immediately apologized for denying an underdog his first career victory. The runner-up, in tears over his near miss, was raucously embraced by the crowd for his oh-so-close effort.

Bristol Motor Speedway was a bizarre mix of emotions Saturday night after Denny Hamlin chased down Matt DiBenedetto to spoil a Saturday night upset. DiBenedetto learned this week that Leavine Family Racing won't bring him back for a second season, and he has no job lined up for 2020.

"I'm so sorry to Matt DiBenedetto, (crew chief) Mike Wheeler. I hate it. I know what a win would mean to that team," Hamlin said as soon as he exited his car. "But I've got to give 110 percent."

Hamlin was the first Toyota and Joe Gibbs Racing driver to start from the pole this season but his race was a roller-coaster that began when his car was damaged when he bounced off of Jimmie Johnson. He later had a loose wheel, fell down a lap and seemed out of contention for his second career victory at Bristol.

At the same time, DiBenedetto was working his way toward the front and put his Toyota out front for a race-high 93 laps. He needed redemption — and a win would have put him in the playoffs, no less — but he again wound up victim to the Gibbs juggernaut. Gibbs has a logjam of talent, Leavine is a Gibbs partner, and Gibbs needs DiBenedetto's seat next year to promote Christopher Bell from the Xfinity Series.

"I wanted it to bad," DiBenedetto said. "I'm sad. Congrats to Denny, raced hard and I've been a fan of his since I was a kid. To be racing door-to-door with him at Bristol in front of a great group of fans — I'm trying not to get emotional but it's been a tough week and I just want to stick around and want to keep doing this for a long time to come. I am not done yet. Something is going to happen."

The crowd roared its support as DiBenedetto's interview was broadcast on the infield big screen.

Roughly 45 minutes later, DiBenedetto found Hamlin on the NBC Sports set and interrupted his interview. The two hugged, and Hamlin pulled DiBenedetto close and whispered into his ear for a long moment.

He remained apologetic for spoiling what would have been a defining moment for DiBenedetto, as well as Wheeler, Hamlin's former crew chief.

"It is the worst person possible to have to pass with eight to go. My history with Mike Wheeler ... Matt is a fantastic driver," Hamlin said. "I have no doubt he's going to land on his feet, something better, and if he doesn't, all you car owners are idiots. Someone with that much talent deserves to be racing for wins on a regular basis."

Hamlin and DiBenedetto raced side by side for several laps before Hamlin completed the decisive late pass and sealed his fourth victory of the season.

DiBenedetto was a career-best second.

Hamlin got over his initial disappointment for DiBenedetto and praised his No. 11 team for its resilient race and the way he picked his way through traffic to reclaim the lead.

"We had a great car that could move around. Came back from a couple laps down and here we are."

DiBenedetto's fight to hang on to the victory was hampered when he encountered Ryan Newman, a driver trying to make the playoffs. Newman refused to give an inch as DiBenedetto tried to put him down a lap, and contact between the two cars caused DiBenedetto's Toyota to tighten up as Hamlin closed the gap.

A DiBenedetto victory would have dramatically changed the playoff picture. There are two races remaining to set the 16-driver field and only nine drivers have locked in their spots. With seven open, a first-time winner would have grabbed a coveted spot.

Johnson has never missed the playoffs since the format began in 2004 but the seven-time champion dropped to 18th in points after a disappointing night at Bristol. Clint Bowyer also dropped out of the top-16, but is only two points behind the final slot, now held by teammate Daniel Suarez.

THE REST OF THE FIELD: Brad Keselowski finished third in a Ford, and was followed by Gibbs driver Kyle Busch, who came from 31st to finish fourth. He received thunderous boos during driver introductions, but the eight-time Bristol winner simply guzzled something from a red plastic cup and thanked the fans for coming.

Chase Elliott was fifth and the highest-finishing Chevrolet. Kyle Larson was sixth, followed by Bowyer and Suarez, who moved ahead of Bowyer in the standings via stage points. Kurt Busch and Ryan Blaney rounded out the top 10.

UP NEXT: The Cup Series is off next weekend and returns to competition Sept. 1 at Darlington Raceway. NBC Sports expects Dale Earnhardt Jr. back in the booth for that event after he skipped Bristol following a crash landing of his airplane Thursday near the track.