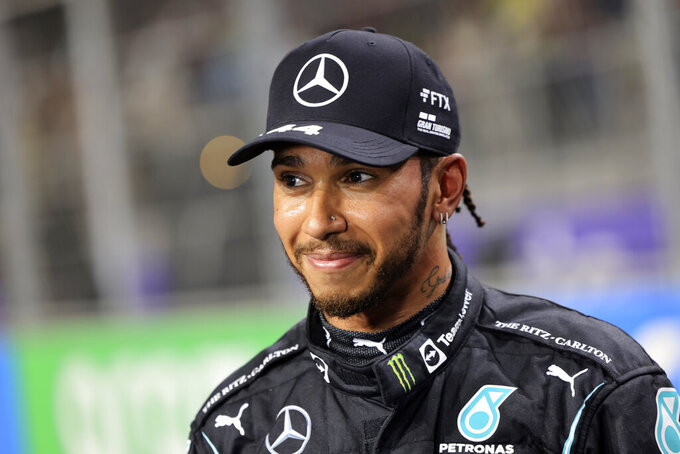 Latifi crashed his Williams car with a few laps left and with Hamilton coasting toward an eighth F1 title. The incident led to a safety car, and Max Verstappen overtook the seven-time F1 champion Hamilton on the last lap to win the world title amid huge controversy.

Although blameless, Latifi was hounded online as outrage grew at how Hamilton's title was so suddenly lost.

“Ultimately, I don't think there's been a huge change or shift, or enough work that's been done by these social platforms. We still have to apply pressure for them to make changes,” Hamilton said Friday after the unveiling of Mercedes' 2022 car. “Mental health is a real thing and through these social platforms people are experiencing abuse.

“No one deserves that and that should never be tolerated,” the 37-year-old British driver added. "(Social networks) are able to change these things and make changes, but they don't seem to do it quick enough. So, I think we just need to continue to apply pressure.”

Latifi was so affected that he hired bodyguards for a sightseeing trip to London with his girlfriend.

“I was in touch with Nicholas, he has my full support and I know how difficult it can be in those situations," Hamilton said. "It’s important for him to know he has support from people around him.”

“I think more needs to be done for athletes, for people in the spotlight because people behind the computer, behind the keyboard think they have a right to say what they like,” Russell said. “It’s almost forgotten that everybody is human ... Something really does need to be done and I felt really, really bad for Nicholas."

Russell had at times also struggled in the same car.

“Mistakes happen and I know firsthand how difficult that specific Williams car was to drive,” he said. “He didn’t deserve at all to get what he received so definitely more needs to be done.”

Latifi, a 26-year-old Canadian, spoke about the impact the threats had on his mental state.

“I was back in London after the race and I had security with me when I went to Winter Wonderland with my girlfriend,” he said Tuesday. “You have to take the threats seriously because you don’t know what might happen and it is just an unfortunate reality of the world we live in.”

“Using social media as a channel to attack somebody with messages of hate, abuse and threats of violence is shocking, and something I am calling out,” he said.

Hamilton also removed himself from his platforms following Abu Dhabi, re-emerging only two weeks ago.

The new 23-race season begins on March 20 at the Bahrain GP.