Gibbs nudges Nemechek to win in Xfinity Series at Richmond 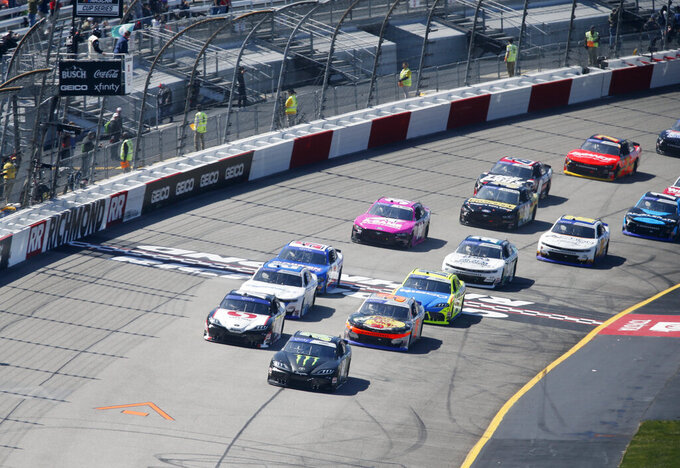 RICHMOND, Va. (AP) — Ty Gibbs admittedly intended to nudge John Hunter Nemechek from the lead in a furious last-lap battle with a victory within his grasp at Richmond Raceway.

He said he just didn't mean to hit him so hard.

“I was going to have to hit him. I definitely, if I could go back, I would have not have drove in as hard and hit him as hard to knock him way up the track,” the rising star said Saturday after his third Xfinity Series victory of the season.

In a stirring duel for the victory, the Joe Gibbs Racing teammates got physical over the final several laps, trading the lead and making contact several times until Gibbs nudged Nemechek's Toyota in turn three of the last lap.

“I definitely deserve one back,” Gibbs said in Victory Lane of the bump. “We were racing for wins and they’re hard to come by. ... Just got in there deep and had to bump him out of the way up the track. We’re short-track racing.”

Nemechek, who is not racing fulltime in the series and thus ineligible for the championship, was less than amused with the way the finish unfolded.

"Him and I will settle it Monday. I don't want to say too much and get myself in trouble, but I just got drove through. He didn’t even try to make the corner there, so ... racers never forget," Nemechek said after finishing second.

Gibbs led 114 laps and has won seven times in 25 starts in the series.

Sam Mayer, just 18, started 11th and finished third and won the $100,000 Dash4Cash bonus. He'll also be among four drivers eligible for it again this coming week when the series remains on a short track at Martinsville Speedway.

The two JGR cars dominated. Nemechek led 64 of the 75 laps in the opening stage, and 67 laps in the second stage before Gibbs ducked underneath him and grabbed the top spot with seven laps remaining in the stage.

In all. Nemechek led 135 laps in a race that featured eight lead changes.