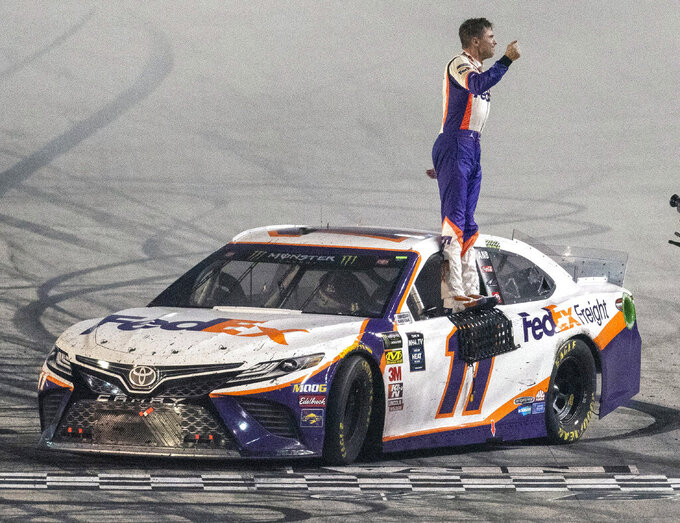 CHARLOTTE, N.C. (AP) — Denny Hamlin has not finished lower than fifth since early July and his current six-race streak includes two victories in the last four races, a pair of runner-ups and a third-place finish.

A year removed from the first winless season of his NASCAR career, Hamlin is officially a title threat again. He is third in the standings, tied with Joe Gibbs Racing teammates Kyle Busch and Martin Truex Jr. with Cup-series highs of four wins each, and has the confidence to finally grab his first championship.

Hamlin heads to Darlington Raceway for Sunday night's Southern 500. He is a two-time winner at Darlington and his average finish on one of the most challenging tracks in NASCAR is sixth.

After patiently chasing down Matt DiBenedetto in the closing laps at Bristol Motor Speedway, Hamlin briefly revealed he has put in personal work this year to be more accountable while focusing on improving himself overall.

"I just think eventually you get older," said Hamlin, who turns 39 at the end of the season, has been racing full-time in Cup for 14 years and is father to two young daughters. "I got a couple kids now, seeing them grow up, (I'm) just doing a lot of growth on and off the racetrack. As I've focused on being a better person outside the race car, it is directly, whether it be coincidence or not, it's directly linked to my on track performance."

Hamlin won at least one race each year his first 12 seasons and in 2010 and 2014 had clear shots to win the Cup title only to squander both opportunities. The 2010 failure to Jimmie Johnson eventually led Hamlin to a sports psychologist, but the recent changes have been driven solely by Hamlin.

"More so than anything, I've just grown up," he said. "I mean, I've really seen the sport, seen it evolve over the last 14 years. I see my kids grow up. I don't know, eventually you've got to grow up and see the bigger picture. I think for me, a lot of soul searching, things like that, to figure out what makes me happy and being content with kind of who I am, the successes and the failures. Everyone is imperfect. You've got to embrace it."

Joe Gibbs has seen the changes this season, which also coincide with the pairing of a new crew chief. Chris Gabehart led Hamlin to a season-opening Daytona 500 victory — his second Daytona win — and immediately put last year's winless season behind the No. 11 team.

The win came less than a month after the death of JGR executive J.D. Gibbs, who is credited with discovering Hamlin and bringing him to the powerhouse NASCAR team. Joe Gibbs believe Gabehart has been steady for Hamlin, and that winning races in honor of J.D. Gibbs has been a motivating factor.

"I think Chris deserves a lot of credit. I think he's really got Denny grounded," Gibbs said. "I think when you get a lot of confidence going with the crew chief, it makes a huge difference. It's a huge deal for me when I see J.D. (the name) over the door in the winner's circle. Seeing Denny have this kind of year, it just makes me realize how much we miss (J.D) and how much he means to our race team, what he means to Denny, too."

"Chemistry is a very fragile thing. It's something you can gain quickly and lose just as quickly," Gabehart said. "It comes down to trust and faith in one another, faith in this group. I think trust is earned, it's not something that's given. I think fortunately we got off on a good foot, Denny and I, this race team. Over time he's just realized that if he stays in the game, we're going to have a shot at it."

Hamlin has not been in the playoff picture since 2014, when he gambled away his chance on a late pit stop. Four years earlier, he had Johnson on the ropes in the penultimate race of the season but ran out of gas and with that went his chance at making the finale an easy drive to the title. Johnson finished second, Hamlin was never in the game and finished 14th, his eight-win season for naught.

"That race turned on its head pretty quickly for us," he said. "I just, man, never got over it. I just never forgave myself or anyone for not stomping on their throat when we had the chance to. That was tough. That was immaturity, letting the moment kind of get the best of you, not understanding if you just do yourself and you focus on what you can do good, you're going to have better results.