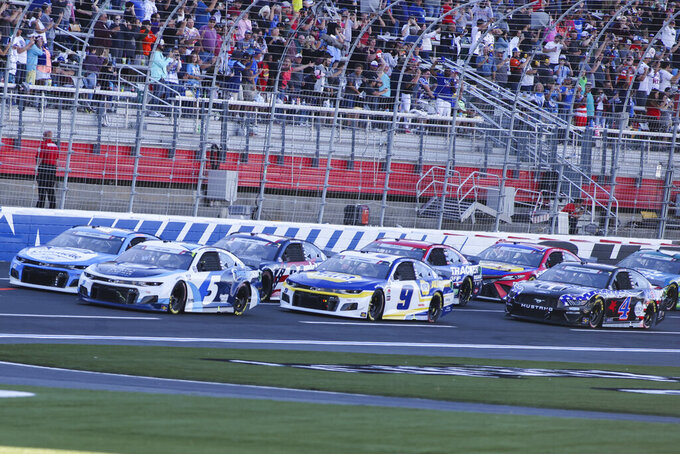 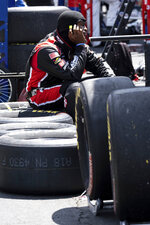 CONCORD, N.C. (AP) — Practice, qualifying, happy fans and a Hendrick Motorsports driver winning at Charlotte Motor Speedway: It doesn't get much more normal than that in NASCAR these days.

Marcus Smith, CEO and president of Speedway Motorsports and general manager of Charlotte Motor Speedway, said he spoke with so many spectators thrilled to watch a race in person, along with others who loved competing.

“They were thrilled to be back in what feels like a full-speed NASCAR race,” a smiling Smith said.

Slowly but surely in a sport built on speed, NASCAR is regaining its pre-pandemic ways. That was evident at Charlotte where the weekend routine looked like it did before the COVID-19 pandemic called for protective masks and contact tracing.

There was a familiar feel to qualifying on Saturday. And then there was the crowd, some 50,000 or so who filled the track.

“It's just nice to actually qualify the way we used to qualify and have people around," driver Ryan Newman said.

The protocols shifted earlier this month. Teams were permitted to bring VIPs and sponsors to events starting at Darlington Raceway three weeks ago.

Charlotte was given the green light two weeks ago by state officials to have as many people as racetrack officials could bring in. That's the case for races later this summer, too.

NASCAR will stage a road race this week at Sonoma, California, that will be limited to 33% of the 47,000-seat capacity.

Nashville Speedway, the next track where practice and qualifying is scheduled ahead of a race, is sold out for the Ally 400 on June 20. (In between Sonoma and Nashville is the All-Star Race at Texas Motor Speedway on June 13.)

Those with tickets are eager to see what could shape up as a wild summer, with some of the biggest names in the sport trying to break through to victory lane.

Denny Hamlin and Kevin Harvick, who combined for 16 victories in 2020, have yet to take a checkered flag with only 11 races left in the regular season. Hamlin leads in points on the strength of nine top-five finishes while Harvick sits in ninth place.

Kyle Busch, who finished third in the 600, was grateful to see people in the seats, even if they weren't pulling for the two-time NASCAR Cup Series champion.

“When we first started coming back to these races fans were at, the boos were back and everything felt like it was getting back to normal,” Busch said. “It’s nice having them, and they enjoy coming back.”

Like Busch, Chase Elliott hadn't won this season until the inaugural Texas Grand Prix in Austin earlier this month. The reigning NASCAR champion didn't let the outside noise of his drought damage his focus.

“That’s how we’ve always approached our racing at the (No. 9) camp,” Elliott said. “That’s how we’ll always do it. We’re just focused on the opinions and the people that matter to us.”

Elliott was also happy that things were familiar at Charlotte.

“We had a nice win last week, which is always good,” Elliott said. “I feel like we’ve been in a good place really the last two or three weeks before that.”

NASCAR shut down in March 2020 along with the rest of the sports world due to COVID-19. Some three months later, the sport took its first cautious steps — no fans in attendance — with races at Darlington and Charlotte.

Almost a year later, there was little evidence of masks or that anyone was worried about the coronavirus.

Tents and campers filled the open areas around the track. The large fan concession area also included a place for those who wished to get vaccinated.

As in the past, fans toured the pit area and cheered the military display that included artillery cannons and hovering helicopters.

“My mom always told me that absence makes the heart grow founder,” Smith said. “I think all those race fans were ready to get back to our NASCAR races and it showed today.”

Former “Tonight Show” host Jay Leno, along with his friend and former band leader Kevin Eubanks, were the grand marshals and gave the command to start engines. Leno happily mixed with fans at the track after his time doing standup comedy was curtailed by the pandemic.

And they're ready to watch NASCAR in person, just like normal.