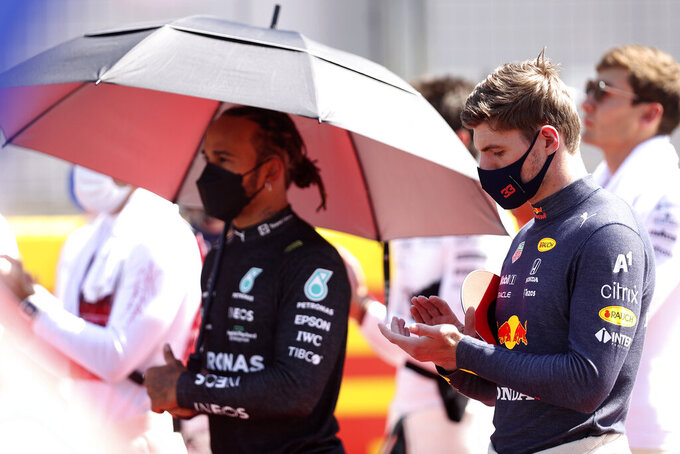 Red Bull driver Max Verstappen of the Netherlands and Mercedes driver Lewis Hamilton of Britain, left, stand on the grid before the start of the British Formula One Grand Prix, at the Silverstone circuit, in Silverstone, England, Sunday, July 18, 2021. (Lars Baron/Pool photo via AP)

BUDAPEST, Hungary (AP) — Max Verstappen is confident that his bruised body is ready to resume an intense Formula One title battle with Lewis Hamilton at Sunday's Hungarian Grand Prix.

Verstappen's sizable championship lead was slashed from 33 points to eight after he crashed at last weekend's British GP. Hamilton won at Silverstone despite taking a 10-second penalty for his role in the crash which sent Verstappen spinning off track. It snapped Red Bull's five-race winning streak and gave Hamilton a first win in two months.

Verstappen's car seat was broken, but no bones were. He was discharged from the hospital that night after precautionary checks, and did simulation races this week for some extra reassurance that he is fit to compete.

“I did a 24-hour sim race this week and it was a good test to see how my body would react to spending time sat in one position and behind screens for a long time,” he said. “I felt absolutely fine which makes me feel positive heading into the weekend. I’m definitely ready to go again.”

Hamilton was almost alongside Verstappen when his Mercedes clipped the Red Bull’s rear wheel, sending Verstappen into a tire wall.

The incident prompted much debate as to who was to blame, while two-time F1 champion Fernando Alonso said it was only a racing incident and merited no penalty either way.

Verstappen did blame Hamilton, posting a message on social networks from his hospital bed on Sunday night, but he's trying not to get too distracted.

“I don’t have much to say on all the media hype, and to be honest I am not interested in getting involved in any of that. I know what happened at Silverstone as I was in the car and I feel a certain way about how my race ended," he said. "Now I’m just focusing on making sure we are the best we can be on track so we can stay ahead in the championship. The team can take care of the official side of things and anything that needs looking into.”

Red Bull will do that on Thursday after successfully asking for a review of the incident. Governing body FIA will hear new evidence from Red Bull, which must appear by video conference with team principal Christian Horner and two other witnesses.

“The crux of the matter is that we bring new evidence, new facts. But I can’t reveal these details,” Red Bull's motorsport adviser Helmut Marko told RTL on Wednesday. “We hope that we will (obtain) a reassessment, because we still think that this penalty was too lenient for Hamilton.”

Marko added that a drive-through time penalty during the race or a one-race ban would be fitting.

“Everyone has their own opinion on the events of Silverstone, and it was a very polarizing incident,” Wolff said. “The most important thing is that Max is okay. It’s never nice to see a car crashing, particularly at such high speeds and at a corner like that, so we’re glad he emerged from the accident unscathed."

Red Bull is finally matching Mercedes for speed after years of playing catch-up.

Verstappen has five wins to Hamilton’s four so far; leads Hamilton 5-2 for pole positions and 4-3 for fastest laps heading to the Hungaroring, where Verstappen clinched his first pole two years ago.

He finished the race in second place last year after crashing before the start on a warmup lap and slamming the front wing into the barriers.

Mechanics had about 20 minutes to replace the front wing and the suspension as Verstappen waited inside the cockpit.

“I enjoy Hungary as a track and let’s hope there is a little less action on the way to the grid,” the 23-year-old Dutchman said. “The mechanics worked some sort of miracle to get my car out for the race last year.”