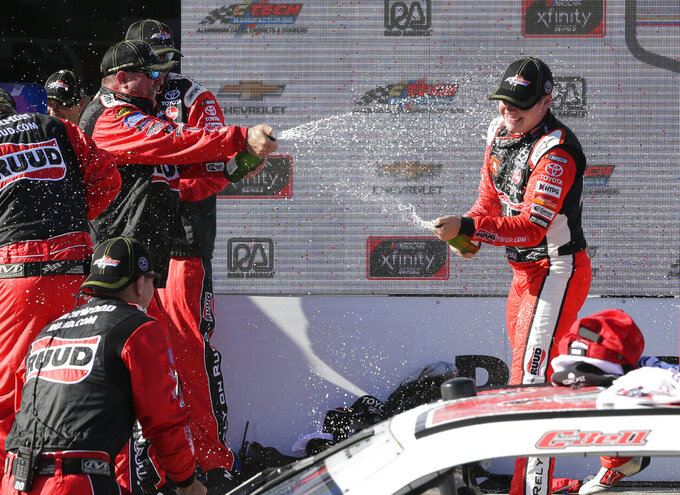 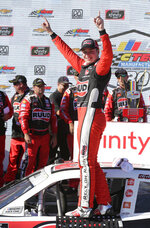 ELKHART LAKE, Wis. (AP) — Team owner Bob Leavine made an unpopular decision when he decided to remove driver Matt DiBenedetto from his Cup Series lineup for next season.

The 24-year-old Bell won the Xfinity Series race at Road America, his series-leading sixth win in a season that's shown he's ready for a Cup Series test, something likely to come next year with Leavine Racing.

After Saturday's win, Bell politely sidestepped a question about whether he was motivated to prove himself to fans.

"My biggest motivation, and that's kind of been the story of my career even from sprint cars all the way to NASCAR, and everything I've been taught is, everybody wants a winner," Bell said. "So I've always strived at winning races."

With the Road America win, he's added a critical nugget to his racing resume. It was his first win on a road course, a style of racing that had frustrated Bell in the past.

"He's come a long way on the road courses, and we know what he can do on the ovals," veteran driver AJ Allmendinger said. "So when he gets in the Cup Series, I feel sorry for those guys."

Road course racing has grown from a novelty event to a serious competition on the NASCAR circuit. Drivers work with coaches and spend time in racing simulators specifically for the road setups, including Charlotte's "roval" — a mix of oval track and infield road course — which will host a postseason race.

"As long as there's road courses in this sport, you need to be good at them, right?" said Jason Ratcliff, Bell's crew chief. "Now there's one in the playoffs, so that's a big deal. It's the same for speedway races. You need to be good at that as well, even though with speedway races it's different. You're definitely at the mercy of everyone around you. But, there are a few guys who seem to win them all. No different than road course races. You have to be good at all types of tracks if your expectations are to be a champion in this sport."

Bell still doesn't love road course racing, but he has worked to get better at it.

"After talking to some of the higher-ups in the NASCAR industry, there are certain race tracks and style of race tracks that they value results more so than others," Bell said. "And I remember when I very first started in NASCAR, they said road course racing is something that's really important, because there is a lot of driver skill involved. So yeah, I think it's very important to be a good road racer."

DiBenedetto is still looking for a ride for next season. He beat himself up after squandering a shot at a top-five finish by crashing on the last lap at Road America on Saturday, calling it "the most rookie mistake of my life."

Saturday aside, DiBenedetto already has shown he's a capable driver. Instead, the biggest factor working against him is the current economic landscape of NASCAR, where dwindling sponsorship money is making good rides much harder to find.

"It's just a crappy part of the sport right now," Allmendinger said. "I've seen people, how harsh they are on Bob Leavine. It's not his fault.

"It's just unfortunately where our sport is right now," he added. "And guys like Matt, who keeps working his (rear end) off, has so much talent, may not have the opportunity because there's not enough rides out there. Good rides. And that's the problem."