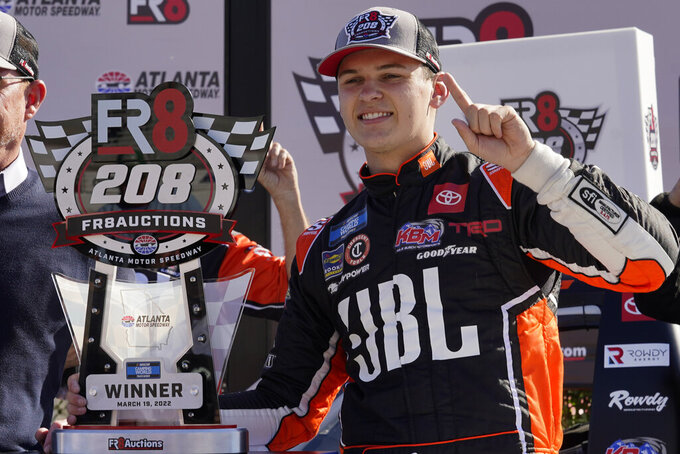 Coming off a victory at Las Vegas, Smith — another 19-year-old from the Peach State — took the white flag with the lead on the outside, just ahead of Kyle Busch Motorsports teammate Heim hugging the line at the bottom the track.

Nemechek, also racing for KBM, looked as if he was going to follow Smith, only to dart suddenly to the inside to follow Heim. That was all the youngster needed to zip by Smith and take the checkered flag.

“I can't believe it,” said Heim, who is from Marietta, an Atlanta suburb about 40 miles north of the speedway. “It's so surreal to be at my home track. I’ve been coming here since I was 2 years old to watch Cup races.”

Ben Rhodes was second, 0173 seconds behind the winner. Smith settled for a fourth-place finish.

“I would like to have duked it out the 51 (Heim) and have nobody in the middle of it,” said Smith, a three-time truck winner. “That's the first win for Corey. I'm excited for him. I remember what it was like when I got my first one.”

It was an interesting decision by Nemechek, who had to choose between his teammates. He went with Heim, a part-timer for the team, rather than Smith, who has a full-time ride.

“There were no team orders,” Heim said. “As long as one KBM truck won, that's all that mattered. All the credit to John Hunter Nemechek for giving me help there.”

Smith started from pole in the first race at the 1.54-mile Atlanta track since it was redesigned, with higher banking, narrower curves and a new surface.

Qualifying was canceled after storms hit the track Friday, forcing a much-needed practice session to be pushed back to Saturday morning.

Hailie Deegan had another tough day, finishing last in the 36-truck field after a frightening incident on pit road.

Her left rear tire caught fire after she came in to change her second flat of the race, forcing her behind the wall with just 24 laps completed.

Deegan was pulled from the machine by her crew as it filled with smoke. She was checked and released from the infield care center.

Deegan has finished 17th, 33rd and 36th in the first three truck races of the season.