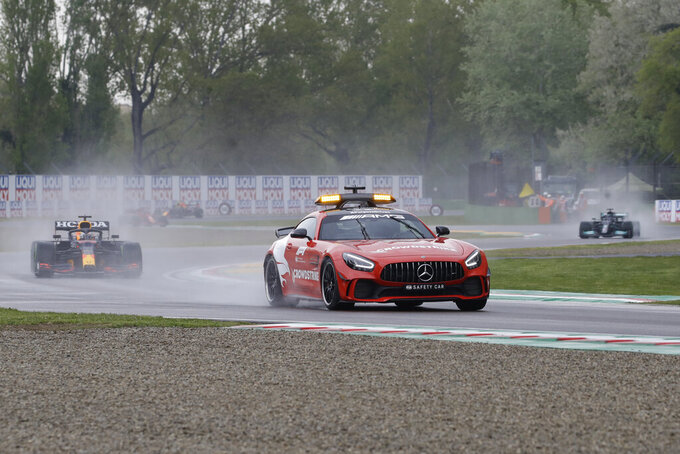 IMOLA, Italy (AP) — Max Verstappen eased to victory in an incident-packed Emilia-Romagna Grand Prix on Sunday as he comfortably beat Lewis Hamilton, who almost crashed out after a rare error from the world champion.

Hamilton hit a wall in a race that was also temporarily suspended following a separate incident involving his Mercedes teammate Valtteri Bottas.

The 23-year-old Verstappen led for the majority of the race on the wet Imola track and the Red Bull driver beat Hamilton by 22 seconds for the 11th win of his career.

Verstappen almost threw victory away as he nearly lost control of his car during the restart after the red flag but recovered and gradually pulled away from the field out front.

“I had my moment in the restart. That was a big one! But after that it was fine,” Verstappen said with a chuckle.

“It’s a very long season so just have to keep on working very hard. I'm very happy about the result today but tomorrow we start again ... It's great to be fighting against Lewis and Mercedes who have been very dominant for so many years.”

Hamilton, who won the season-opening Bahrain GP last month, showed all his skills to make his way back up the field after falling as far back as ninth following the incident just before the halfway point of the race.

“Congratulations to Max, he did a fantastic job today. Also to Lando, what an awesome job," Hamilton said. “On my side it was not the greatest of days, first time I made a mistake in a long time, but I’m grateful to have been able to bring the car home."

Verstappen started third, behind Red Bull teammate Sergio Perez and pole-sitter Hamilton. The Dutch driver got off to a great start and jumped his teammate before touching wheels with Hamilton and forcing his way into the lead.

Hamilton damaged his front wing in that incident but was running a comfortable second until he slid off the track, through the gravel and into the wall on lap 31. The British driver managed to return to the track eventually but had dropped to ninth.

A short time later, Bottas and Williams driver George Russell were involved in a crash and the race was red-flagged on lap 34 with debris from their cars scattered across the track.

The safety car first appeared while Nicholas Latifi’s Williams was recovered after a crash on the second lap following contact with Nikita Mazepin.

Perez slid off the track and was handed a 10-second penalty for overtaking under the safety car, when he retook the places he lost. Perez took his penalty on lap 29 and was fourth when the race restarted after the red flag but spun off at the Villeneuve chicane shortly after and slid down to 14th.

Hamilton was eighth after the restart but began picking off his rivals. He was up to fifth by lap 43, fourth by lap 50 and third — with Norris in his sights — by lap 55. And he got past his compatriot to take second place with three laps to go.

“Really awesome to get back to second and a good battle with Lando,” Hamilton said. “I definitely didn’t know that I would be here when I was facing that barrier.”

Aston Martin’s Lance Stroll finished seventh but dropped to eighth after being handed a five-second penalty after the race as he was deemed to have left the track while overtaking AlphaTauri’s Pierre Gasly early on. Gasly moved up a place to seventh.

Alfa Romeo’s Kimi Raikkonen was originally ninth, just ahead of the Alpines of Esteban Ocon and Fernando Alonso, but he also received a time punishment. The Finnish driver was hit with a 30-second penalty for an infringement just before the restart, dropping him to 13th.

That lifted Alonso into 10th place, earning the two-time champion the first points of his F1 comeback. Perez was 11th.