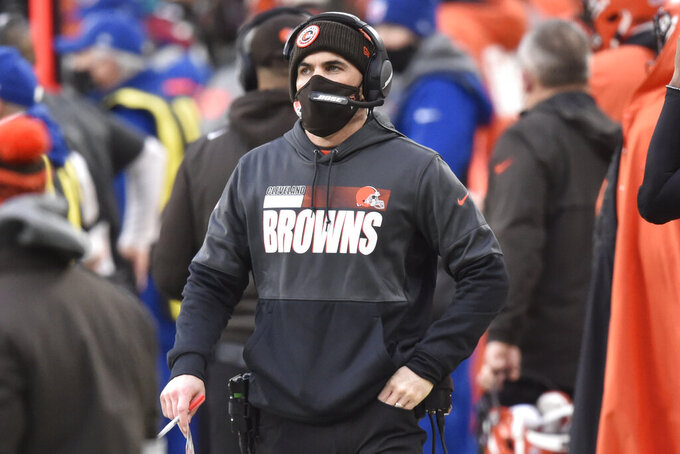 Cleveland Browns head coach Kevin Stefanski looks on during the second half of an NFL football game against the Pittsburgh Steelers, Sunday, Jan. 3, 2021, in Cleveland. (AP Photo/David Richard)

Marshall has postponed a two-game men’s basketball home series with Charlotte because the Thundering Herd does not have enough available players due to the coronavirus, contact tracing and injuries.

Marshall and Charlotte were set to play on Friday and Saturday in Huntington, West Virginia. The schools are working with Conference USA to reschedule the games.

The ACC says the team has paused all athletic activities and is adhering to the protocols in the ACC Medical Advisory Group report.

No makeup date has been determined.

Oaklawn Park in Arkansas plans to allow limited fans during its winter-spring horse racing meet that runs Jan. 22-May 1.

Grandstand general admission won’t be allowed initially. Entry to the grandstand will be for guests with a racing credential or a reservation for that day’s races.

The seventh-ranked Arizona women’s basketball game at Washington scheduled for Friday has been postponed due to COVID-19 issues within the Huskies program.

The Huskies announced the postponement on Wednesday and said the programs are working with the Pac-12 to try and find a potential opportunity to reschedule the game.

The Patriot League men’s basketball games between American and Lehigh scheduled for Saturday and Sunday have been postponed due to a positive COVID-19 test within the American men’s basketball program’s Tier 1 personnel.

The contests between the Eagles and Mountain Hawks will be rescheduled following discussions with the two schools and the league office.

The Stanley Cup champion Tampa Bay Lightning have partnered with the Florida Panthers to offer use of its American Hockey League affiliate Syracuse Crunch for the 2020-21 season.

As part of the partnership, the Panthers will be able to assign players to the Crunch to train, practice and play. The Crunch coaching and support staff will remain intact, led by head coach Ben Groulx.

The No. 3 UConn women's basketball team has had another game postponed because of coronavirus-related issues.

The Huskies, which saw their planned Thursday showdown with No. 6 Baylor canceled after Baylor coach Kim Mulkey tested positive for COVID-19, announced Wednesday they will not play their scheduled game at Xavier on Jan. 13 because the Musketeers have announced a pause to team activities due to contact tracing.

The schools say a makeup date will be announced at a later time.

UConn’s next game is scheduled at home on Saturday against Providence. Coach Geno Auriemma is seeking his 1,098th win, which would tie him with the late Pat Summitt for second all-time, behind Stanford coach Tara VanDerveer's 1,103.

IndyCar has moved what was supposed to be its season-opening race in St. Petersburg, Florida, to April 25.

The race through the downtown city streets had been scheduled to start the new season for a 10th consecutive year on March 7.

IndyCar's season opener will now be held at Barber Motorsports Park in Alabama on April 11.

The switch gives St. Pete promoters hope that more spectators will be permitted to attend the popular street festival as pandemic restrictions loosen.

IndyCar previously rescheduled the Grand Prix of Long Beach from April until September because of restrictions in California. That move opened room on the schedule for St. Pete to request a later race date.

“It’s not surprising that an event of this magnitude, scheduled for the first week of March, is still subject to the implications of the pandemic,” said Penske Entertainment Corp. President and CEO Mark Miles, adding that the April 25 date for St. Pete is “a more suitable date, which helps consolidate the beginning of our schedule and allows us to stay on NBC network television.”

IndyCar was already in St. Pete last March and prepared to open its season when sports shut down at the start of the pandemic. The season ultimately did not start until June and St. Pete was moved to October as the finale.

The Cleveland Browns continue to work virtually while trying to get a handle on a COVID-19 situation that has knocked coach Kevin Stefanski out of Sunday’s playoff game.

Stefanski tested positive Tuesday and won't be with the team in Pittsburgh for the wild-card game, Cleveland’s first playoff game since 2003.

Stefanski is working from home as the team’s facility remains closed to do contact tracing. The Browns are hoping to be able to practice on the field Wednesday.

Cleveland ended the NFL’s longest playoff drought with a 24-22 victory last weekend over the Steelers, who sat Ben Roethlisberger, T.J. Watt and others.

However, the celebration by the Browns and their fans was quickly doused by the positive test for Stefanski as well as Pro Bowl left guard Joel Bitonio and two assistant coaches.

Manchester City says reserve goalkeeper Scott Carson and midfielder Cole Palmer are among three people at the Premier League club to have tested positive for the coronavirus in the latest round of checks.

City had six players missing for Sunday’s 3-1 win at Chelsea in the league because they had contracted COVID-19. They were goalkeeper Ederson, defenders Kyle Walker and Eric Garcia, midfielder Tommy Doyle and forwards Gabriel Jesus and Ferran Torres.

City plays at Manchester United in the English League Cup semifinals on Wednesday and manager Pep Guardiola has said “we don’t have many players” for the game.

City says the third person to have tested positive for the coronavirus in the latest round of checks is a member of staff.