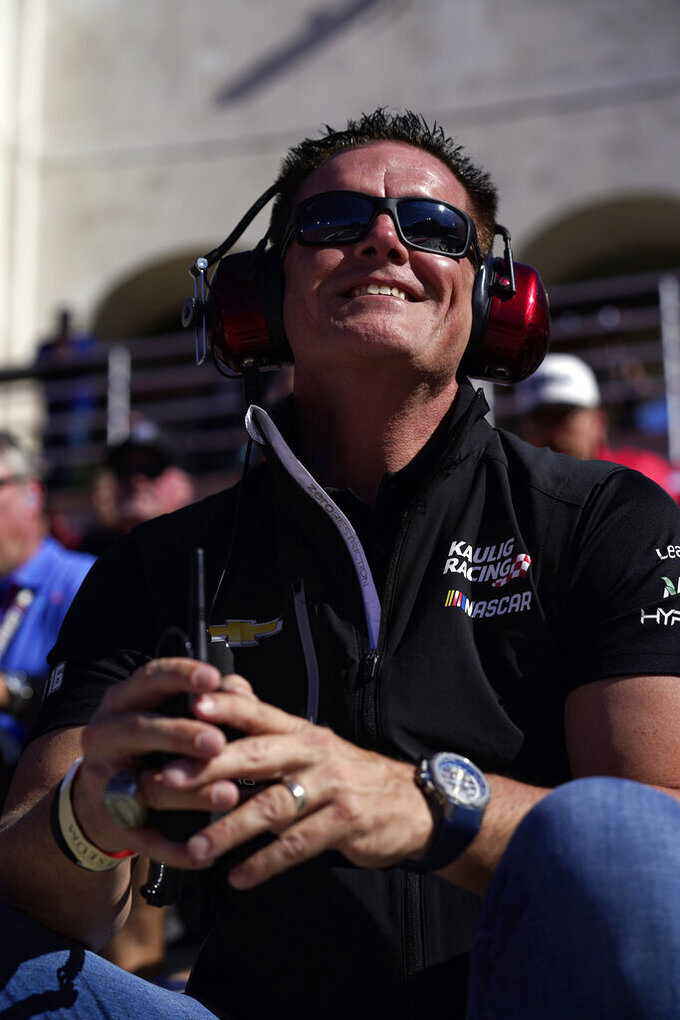 CHARLOTTE, N.C. (AP) — LeafFilter is basically a screen that prevents leaves and debris from clogging your gutters. It is also the company that helped Matt Kaulig build a professional sports team from scratch.

Kaulig went from selling home remodeling products to selling LeafFilters and now owns the company with some $1 billion in annual sales. He is also the newest team owner at NASCAR's top level.

During an interview with The Associated Press, he motioned to the two Kaulig Racing trucks parked inside a makeshift paddock outside Los Angeles Memorial Coliseum last weekend.

“I think we've just been blessed with a great product and a bunch of great people who work for us," he said. "Now here I am looking at LeafFilter (branded) all over everything we have here at the Coliseum, one of the greatest venues in sports.”

It's been a meteoric rise for the former Akron quarterback, who earned a business degree and spent his first eight years out of college in sales. He quit in 2005 when he came across LeafFilter, and at 32 poured everything into growing the company out of the garage of his Ohio home.

Kaulig is now the owner of a business with 140 locations across the U.S. and Canada.

When it came time to advertise his gutter guards, Kaulig tapped into his marketing budget to dabble in NASCAR sponsorship. LeafFilter in 2015 sponsored 24 races for an Xfinity Series driver but Kaulig wondered why he was paying someone else to advertise his company.

“We come to the track and being around the garage, being around other owners, really learning the business of NASCAR and being entrepreneurial, I was like, 'I think I can do this,’” Kaulig said.

And did he ever.

Kaulig Racing debuted with one full-time car in the Xfinity Series in 2016. By the end of his sixth season, Kaulig had 14 victories and three consistent Xfinity title contenders. AJ Allmendinger ended his semi-retirement to drive for Kaulig and help the organization grow.

This year, Kaulig Racing will attempt to win the Xfinity title with three full entries, but the team also made its move to Cup official. Justin Haley will drive the No. 31 Chevrolet fulltime while Allmendinger will share the No. 16 with Daniel Hemric and Noah Gragson.

Kaulig will have two cars next week locked into the season-opening Daytona 500 because he has charters teams need to guarantee a spot in the field each race. Kaulig's two charters were purchased from Spire Motorsports, a deal announced in June to the absolute shock of rival team owners.

Denny Hamlin just a year earlier paid an estimated $4.5 million to land a charter for his 23XI Racing team; Kaulig is believed to have paid more than $10 million each but declined to discuss how much he gave Spire.

Either way, the Kaulig transaction dramatically changed the brokering scene as teams in need of charters were now negotiating for something that had nearly tripled in price overnight.

Kaulig smiled when asked about disrupting the market.

Kaulig, who is in his late 40s, is every bit still a team-leading quarterback. He looked the part at the Coliseum, high energy and full of motivation as he mingled with his two teams ahead of the race while rocking the Super Bowl-style ring he wears almost every day. It commemorates Kaulig Racing's first victory, a Ross Chastain win in the 2019 Xfinity race at Daytona.

Kaulig didn't know Chris Rice before he met him in NASCAR and the president of the team is now one of his closest friends. The duo helped reignite Allmendinger's passion for racing; he won six races last year and came one race short of the Xfinity title.

Allmendinger refers to 22-year-old Haley as his little brother, and Kaulig takes great pride in developing Haley over three seasons in Xfinity into a Cup driver. And he's eager to give Gragson 14 Cup starts this season.

“It has to be fun, we've said from the start,” Kaulig said. "People ask ‘Why are you doing this? Why would anybody? It’s a Sunday and you're going to do this 37 more weeks this year?' So it has to be fun or we don't need to be here. It's different for me because I don't have to do this. I have other jobs, I have other means of making money.

“But we can do this, we can go racing, and we can actually make a business of it," he said. "So there's a competition fun side, a business fun side, and we want everyone who is part of it to enjoy it with us.”