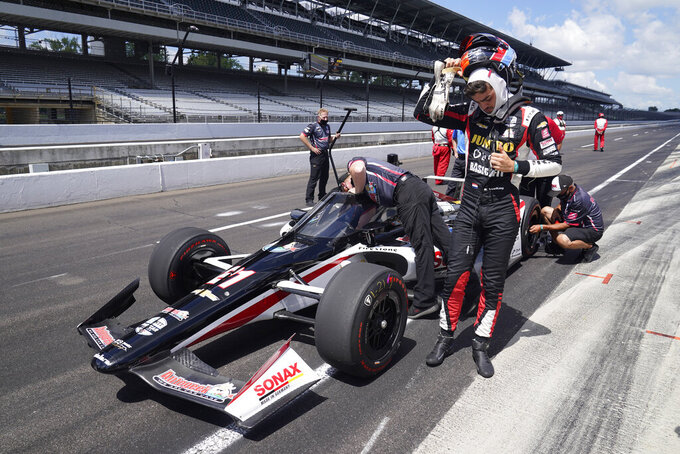 KANSAS CITY, Mo. (AP) — Indianapolis 500 rookie Alex Palou is a bona fide polyglot, one of those exceptionally rare people who can speak three or more languages so fluently they can alternate between each in a single sentence.

In his case, the 23-year-old Spanish driver is fluid in his native Spanish along with English and Italian.

Palou will need to add a few more to his repertoire, though, if he wants to speak to the rest of the five-man rookie class taking the green flag Sunday in their native languages. Rinus VeeKay is from the Netherlands, Dalton Kellet was born and raised in Canada, Pato O'Ward is from Mexico and Oliver Askew is an American — though his mother is Swedish.

Together, they have made the always-global Indianapolis 500 even more cosmopolitan than usual.

“It's amazing how much respect you have when you come to the speedway. It's something you don't really feel at other spots,” said Palou, who qualified seventh for team owner Dale Coyne. “All the crews, all the teams are talking about this race from the first day, from January, and this is the race we're all hoping to win.”

All five rookies have more than just hope going for them.

VeeKay was the fastest in qualifying and will start fourth on Sunday. The 20-year-old from the North Holland city of Hoofddorp got off to an inauspicious start on ovals, crashing out twice during the doubleheader at Texas and again at Iowa. But VeeKay also finished fifth on the road course at Indianapolis Motor Speedway, and he's driving for Hoosier native Ed Carpenter, whose own ability to get around the 2 1/2-mile speedway has been proven over the years.

Palou will start right behind him. He's from the small village of Sant Antoni de Vilamajor — which means he also represents the autonomous region of Catalonia. He earned his stripes driving across Europe, becoming the first Spaniard to win a GP3 race in 2015, before a move to IndyCar that already has included a podium finish at Road America.

O'Ward failed to qualify for the Indy 500 for the Carlin team last season, but his move to Arrow McLaren SP has reaped immediate rewards. The 21-year-old from Monterrey has four top-10 finishes, including a second-place run at Iowa, and is fourth in the series standings. He will roll off 15th on Sunday after posting the fastest speed of final practice.

“It’s just been really important to try and get the best car under us for race day,” O’Ward said. “Traffic running is going to be key. It’s going to be my first 500. From just feeling out practice and everything, it’s so important to have a car that’s able to follow closely and be able to get runs on people, ultimately move forward instead of moving backward.”

Askew is no stranger to moving forward at the Brickyard, winning the Indy Lights race on Carb Day a year ago. The Florida native, who also holds Swedish nationality, is coming off a doubleheader at Iowa in which he finished third and sixth.

Kellett is the final rookie in the field. The 26-year-old from the Ontario town of Stouffville grew up racing snowmobiles, though he has taken just as quickly to the high speeds of Indianapolis. Perhaps it helps to have an engineering degree from Queen's University at Kingston, but Kellett has the No. 41 for A.J. Foyt Racing rolling off 24th.

“We’ve really had the focus this week for the race, which is what we’re looking ahead for and devoted most of our time to, so I think being conservative in qualifying was always our plan,” Kellett said. “But very happy with where we're starting.”

Where each of the rookies finish is far more important.

Now, the Indy 500 used to be a race that rewarded experience. There was one year Foyt was the only driver under the age of 30 in the field, and Al Unser Sr. was five days shy of his 48th birthday when he won for the fourth time. And while Troy Ruttman remains the youngest winner at 22 years, 80 days when he reached victory lane in 1952, he remains an exception to the rule: Will Power was 37 when he won in 2018 and Simon Pagenaud was 35 a year ago.

Danica Patrick, who will help call the race for NBC, was 23 when she finished fourth in the 2005 race. She thinks there is “an element of ignorance being bliss at Indy,” but Patrick also believes there is value in experience.

So does Askew, who admitted feeling chills when he climbed into his car for the first time.

“This place can be pretty daunting, especially for a rookie,” he said. “The qualifying was really intense. I only turned eight laps between the two stints we did, and they were the most heart-pounding eight laps I've ever done.”

Now he'll have to bottle up those nerves — and calm that pounding heart — for a full 200 laps. If any rookie can do it well, they could become just the eighth to win the Indy 500 and the first since Juan Pablo Montoya in 2000.

“I have a car that's super confident to drive and that makes it for a rookie a lot more fun,” VeeKay said, “and also a lot easier to go flat-out. I've had a great car all season but I just haven't had a lot of luck. So let's hope the turnaround starts now. I'm super happy with starting fourth and I hope we can take three places off the end result on Sunday.”