Gasly to return to AlphaTauri as F1 "silly season" begins 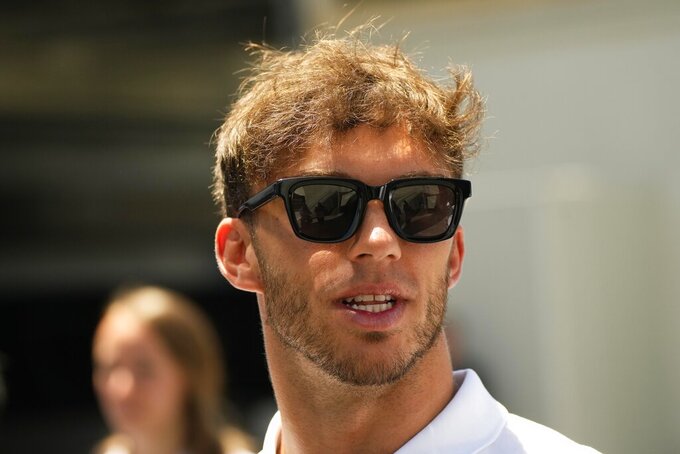 AlphaTauri driver Pierre Gasly of France arrives prior to the third free practice at the Baku circuit, in Baku, Azerbaijan, Saturday, June 11, 2022. The Formula One Grand Prix will be held on Sunday. (AP Photo/Sergei Grits)

MONTREAL (AP) — Pierre Gasly is “100% confirmed” to return to AlphaTauri next season, and teams believe Oscar Piastri is ready for a promotion into a Formula One seat.

But Williams expects its lineup to remain unchanged through the end of the year — great news, if true, for Nicholas Latifi — and McLaren boss Zak Brown said his relationship with embattled driver Daniel Ricciardo has never been better.

All that was revealed Saturday at the Canadian Grand Prix, the ninth event on this year's calendar and a solid six weeks before F1's “silly season” of driver movement is expected to hit full swing.

Speculation has swirled since last month when Brown publicly put Ricciardo on notice to pick up his performance with McLaren. Although the Australian has a contract that runs through 2023, Brown revealed there are “mechanisms" for McLaren to end the deal early.

But as the series returned to Canada for the first time since 2019, Toronto native Latifi has admitted that his seat with Williams is not secure. There have been suggestions Latifi could be replaced after Sunday's race by Piastri, the reigning F2 champion. Piastri has a one-year deal with Alpine as the reserve and test driver, but the team had promised to help him find an F1 seat for 2023.

Alpine principal Otmar Szafnauer said “yes” when asked if Piastri was ready for the promotion, but said he had no information beyond the speculation swirling through the paddock that the Australian was set to replace Latifi.

And Jost Capito, head of Williams, seemed to dismiss the notion Latifi will be out of work following Sunday's race at Circuit Gilles Villeneuve. Capito acknowledged Piastri was “ready to go into Formula One” and was “one on the list for sure” of any team seeking a driver.

But could Piastri be in a Williams seat as soon as the British Grand Prix? Capito said both Alex Albon and Latifi are under contract.

“We are focused on this year, we have a driver lineup for this year,” Capito said. “We don't have any other plans. Both have a contract for the season and that's what our plan is, to fulfill that.”

The situation is not at all murky for Gasly at AlphaTauri, as team principal Franz Tost was firm in that the Frenchman will be back in 2023.

Gasly himself had not seemed so sure just one week ago in Baku, as the 26-year-old stressed he wants to race for wins and not just points. That led to speculation Gasly could try to break free from Red Bull, which has backed him for most of his career but does not have an open F1 seat and just extended the contract of Sergio Perez.

But when asked how Gasly was convinced to stay, the team boss was curt: “He has a valid contract, there’s nothing more to say.”

Ricciardo has been asked about his future in both F1 and with McLaren nearly every week since Brown publicly assessed the Australian's time with the team as underwhelming.

Ricciardo says his contract is clear through 2023, but Brown has indicated there are clauses that could create an early exit. Asked how their relationship has been in the month since Brown was publicly critical of the popular driver, Brown said “the relationship with Daniel has never been better” and the two recently had dinner together in London.

“We need to produce a faster race car,” Brown said. “Last year in Monza when we had a strong race car we could see what Daniel and Lando could do with it. We need to focus on giving our drivers better race cars and I think Daniel is highly motivated and he has all of our support. We're having fun and have a great relationship with him and hopefully we'll have a good weekend.”