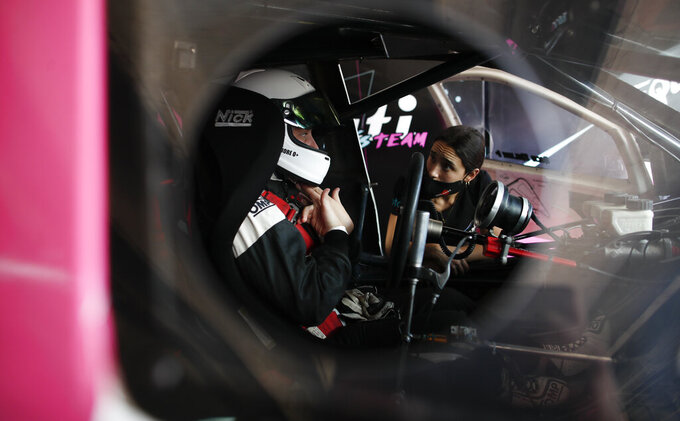 Vitarti Girl's Team mechanic Agustina Carreira talks to driver Rocio Migliore before leaving the pits for a training session at the Oscar y Juan Galvez track in Buenos Aires, Argentina, Friday, April 2, 2021. On their debut, the team led the race until Migliore, who started in eighth position, made a mistake on the final lap. “I lost because of my lack of experience," she said. (AP Photo/Natacha Pisarenko) 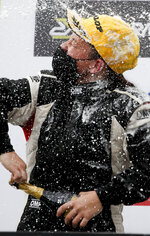 BUENOS AIRES (AP) — Standing on the starting grid, team director Tamara Vital patted the roof of a white Chevrolet with the No. 31 on the windshield and prayed.

Next to her, with hands stained by grease, mechanic Agustina Carreira gave instructions to driver Rocío Migliore before a historic moment for them and for auto racing in Argentina.

The three are part of the Vitarti Girl’s Team, the first entirely female team to take part in a national racing competition in Argentina — the Top Race Junior series. In their debut last Sunday, the rookies finished second at the Oscar y Juan Gálvez track in Buenos Aires.

While many auto racing competitions are open to both male and female drivers, it's rare to see women making up the entire crew, checking engines, putting on tires and analyzing race times.

“Racing has been inclusive since it was founded, but there were not many opportunities for girls to work in the technical part," the 27-year-old Vital, who founded the team, told The Associated Press. “We decided to create the team with that purpose, to show that they could also have a place in racing.”

The team's group of engineers and mechanics wore black shirts and pink pants for the race as they meticulously refilled the gas tank, checked engine parts and measured the pressure of the tires of the car, which can go as fast as 134 mph (215 kph).

While each team member has her own role, they constantly exchanged opinions during the event.

“This is my first race as a mechanic,” said Carreira, who was taught by her grandfather to work with sheet metal and then studied electricity and mechanics — two fields that are heavily male dominated in Argentina. “The only place in my career where I did not face prejudice was in this race.”

In the last five years, Argentine women have led massive protests against sexist violence and pressed for gender equality to become a central part of the country's social agenda. The legalization of the right to abortion in 2020 was part of that change, which has also impacted sports.

The country's women's soccer league became professional in 2019 and one year later a transgender woman was authorized to play for a top-division team.

Finding sponsors has been difficult for Vitarti Girl’s Team, though, and Vital said they only have the budget to compete in two more races.

In their debut, the team led the race until Migliore, who started in eighth position, made a mistake on the final lap.

“I lost because of my lack of experience," she said.

Her teammates hugged her and cried, hoping their race has only just begun.