Verstappen beats both Mercedes for pole at French GP 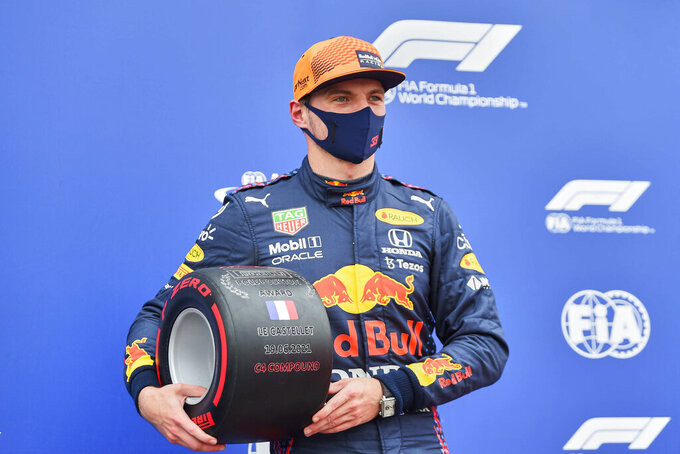 Red Bull driver Max Verstappen of the Netherlands poses after he clocked the fastest time during the qualifying session ahead of the French Formula One Grand Prix at the Paul Ricard racetrack in Le Castellet, southern France, Saturday, June 19, 2021. The French Grand Prix will be held on Sunday. (Nicolas Tucat/Pool via AP)

LE CASTELLET, France (AP) — Formula One championship leader Max Verstappen won his second pole of the season and put his Red Bull in front of Mercedes rival Lewis Hamilton for the start the French Grand Prix.

Verstappen set a time of 1 minute, 29.990 seconds around the Paul Ricard circuit in southern France to grab the top starting spot before Hamilton and his Mercedes teammate Valtteri Bottas crossed the line at the end of Saturday's qualifying session.

Bottas jumped to second when he crossed the line, but Hamilton completed his lap right behind Bottas and bumped his teammate down a spot.

Sergio Perez was fourth for Red Bull as the top four qualifiers all ran at the rear of the pack before completing their final flying laps as the session expired.

Carlos Sainz was fifth for Ferrari and followed by Pierre Gasly for AlphaTauri and Charles Leclerc in seventh for Ferrari. McLaren teammates Lando Norris and Daniel Ricciardo were eighth and 10th, respectively, separated by Fernando Alonso in ninth for Alpine.

Verstappen's only other pole this season came in the opener at Bahrain, but he finished second to seven-time champion Hamilton. He's since won two races to take a four-point lead over Hamilton into Sunday's race.

His advantage might have been larger but the Dutchman crashed when his tire failed while leading late at the Azerbaijan Grand Prix two weeks ago.

Verstappen had qualified fourth in his both of his previous two races at Paul Ricard.

“So far it's been a really positive weekend on the track,” Verstappen said. “Of course no points are scored (qualifying), but for us great day and we have to finish it off and try to get 25 points that we lost in Baku.”

Hamilton and Bottas swapped chassis this weekend and Bottas said he's off to a much better start than in Baku, where he qualified 10th and finished 12th. But Hamilton said he's been “generally unhappy in the car all weekend" and the qualifying effort was a breakthrough.

“It's been a really, really hard weekend, mentally and not just talking physically, but trying to get the car into a happy place,” Hamilton said. “You wouldn't believe how many changes I've made since practice one, going around and around kind of chasing our tail and ended up coming back to something similar to where we started."

Mick Schumacher made it through to Q2 for the first time in his F1 career, but only after his crash ended Q1 25 seconds earlier. The rear of his Haas spun and Schumacher went backward across the runoff before hitting a barrier.

The opening qualifying session was stopped by a red flag after just three minutes when Yuki Tsunoda spun off backward into a barrier behind Turn 2. He will start last.