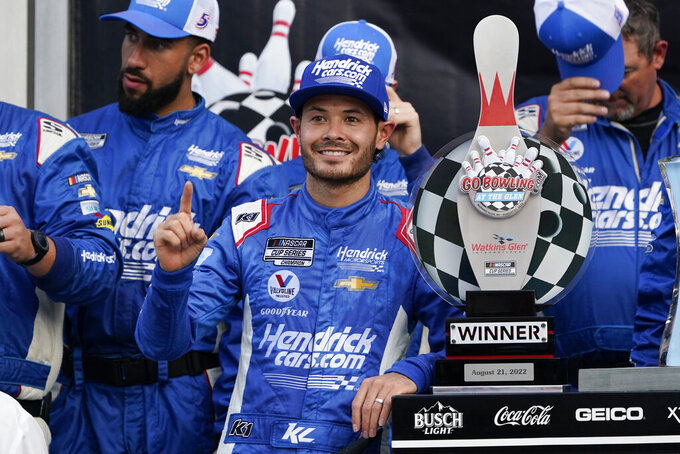 CHARLOTTE, N.C. (AP) — Statistics and the oddsmakers make Chase Elliott this year's favorite to win the NASCAR championship. He leads the Cup Series with four wins, won the regular-season title and enters the playoffs with a 15-point cushion in the standings.

Elliott doesn't put too much faith into the numbers game. If there truly is a favorite in this 16-driver field, he can't pick one, not even himself.

“I don't really see a favorite. I mean, it seems like some weeks you have some guys who are really strong up there contending for wins, and then other weeks it's a bunch of different guys,” Elliott said. “To me, I think the narrative of how many winners we have, it's not a fluke. Anything can happen to anyone in the last 10, so I personally don't think there's a favorite.”

NASCAR had 16 different winners during the regular season, including five drivers who made their first career Cup Series visits to victory lane. It made for a dicey regular-season finale at Daytona, where two spots in the field were open only because injured driver Kurt Busch withdrew his medical waiver because he won't be ready to race when the playoffs open Sunday at Darlington Raceway.

Ryan Blaney and Martin Truex Jr., both winless this season but ranked inside the top five in the standings, were racing each other to make it into the playoffs on points. But then Austin Dillon won the race to claim one of the spots, and Blaney edged out Truex for the final spot.

Truex, who advanced to the championship finale in four of the last five years, now can't finish higher than 17th in the final standings, a playoff stalwart shut out of title contention. Racing instead for the title are first-time playoff participants Ross Chastain and Daniel Suarez, who combined for three regular-season wins for Trackhouse Racing, Chase Briscoe of Stewart-Haas Racing and rookie Austin Cindric, the Daytona 500 winner from Team Penske.

The new crop of young drivers racing for a championship was aided by NASCAR's introduction of the Next Gen car, an industry-wide project to design a spec vehicle that contained costs and leveled the playing field. Some teams caught on quickly with the car, while it took others deep into the season to find a comfort zone.

Kevin Harvick won back-to-back races in August to snap a 65-race skid and qualify for the playoffs for the 13th consecutive year. But is the 2014 champion a serious contender?

“As we started the year with the new car, we were on the wrong side of the fence and trying to figure everything out,” Harvick said. "And as we’ve gone through the year we’ve become progressively better, and we figured some things out and got back to victory lane and really have some momentum as we start the process of these last 10 weeks and racing for a championship.

"The biggest thing is, we’re giving ourselves a chance to race for the championship – that’s the first goal. That looked bleak for a little while, but now we’re in a good position to get started.”

As Harvick's teammate pointed out, the playoff drivers will have to contend with the entire field because the gap between the top teams and small teams has closed.

“I think the thing people are overlooking with these playoffs is in the past, the playoff guys were so much faster from a speed standpoint that the non-playoff guys didn’t even have a chance to win any of the races or truthfully contend in the top five to 10 sometimes,” Briscoe said. “Now, there are legitimately seven to eight guys that can still go win races that aren’t in the playoffs."

Chastain, meanwhile, has angered much of the field with his aggressive driving. Chastain knows he's made enemies, Kyle Busch among them.

The only active Cup driver with multiple championships heads into the playoffs without a contract for next year and a split with Joe Gibbs Racing, his home since 2008, a very real probability. He's got no time for Chastain — it was Busch who turned the rival driver's name into a verb when he said he “got Chastained” after a recent crash — and suggeswted many veterans won't give Chastain an inch the next 10 races.

“Absolutely not, no way, no chance," Busch said. “I don’t think people are paying him back yet, they’re waiting for the right time.”

Reigning Cup champion Kyle Larson starts the playoffs in a far different position than last season. He was the top seed with five wins a year ago, then won five playoff races to win his first title.

Now he's fourth in the standings with only two wins, and, three engine failures among the six races he's failed to finish.

“I think our regular season didn’t go very well, to our standards, but I don’t really know if it did for anybody,” said Larson. “Even for Chase, like I don’t even know if his regular season was up to their standards. There was just a lot of inconsistency this year throughout the regular season.”

But Larson has been strong on intermediate speedways, which make up half of the playoff schedule.

“I know we have a championship caliber team. We proved that last year and we just have to do it again," Larson said. “Even though I have favorites, I’m not confident in anything, just because of how wild and inconsistent the season has been for so many people. I think you can look at us as being one of the favorites. I think you can look at Chase , obviously; and in my opinion, Ross Chastain."