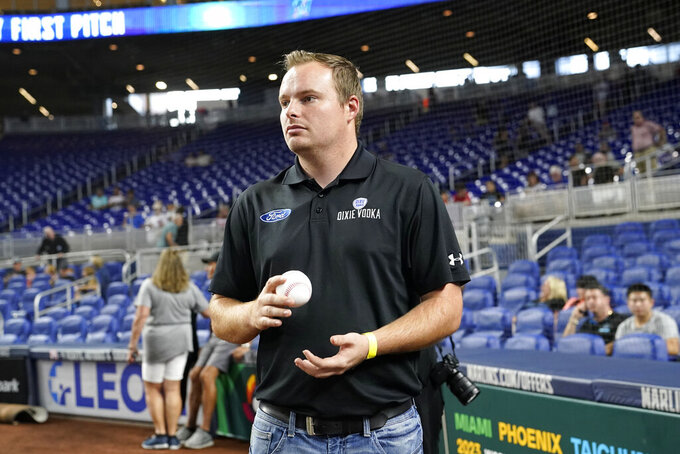 NASCAR driver Cole Custer holds a baseball before throwing a ceremonial pitch before a baseball game between the Miami Marlins and Chicago Cubs, Monday, Sept. 19, 2022, in Miami. (AP Photo/Lynne Sladky)

CHARLOTTE, N.C. (AP) — NASCAR said a review of data and team communications showed that Stewart-Haas Racing manipulated the results of the playoff elimination race at Charlotte, an infraction that drew an additional $200,000 in fines on Tuesday.

“Nothing contradicted that that was done deliberately," NASCAR senior vice president of competition Scott Miller said of Cole Custer slowing on the backstretch of the final lap to help teammate Chase Briscoe gain the positions needed to advance into the next round of the playoffs.

The new penalties brings SHR's monetary fines to $300,000 over the last week; Kevin Harvick, one of the most outspoken drivers about safety concerns with NASCAR's new Next Gen car, was penalized along with his crew chief when his Ford failed a post-Talladega inspection.

On Sunday, Custer appeared to deliberately hold up a line of traffic on Charlotte's road course as teammate Briscoe stormed past in a desperate effort to move into the third round of the playoffs. Briscoe finished ninth, good enough to bump reigning NASCAR champion Kyle Larson from the playoffs as the field was trimmed from 12 drivers to eight.

Briscoe earned the eighth and final spot in the next round of the playoffs by two points over Larson.

NASCAR said after Sunday's race it was reviewing Custer's contact on the final lap. The penalties levied were a $100,000 fine for Custer and loss of 50 driver points, as well as 50 owner points for SHR. Crew chief Mike Shiplett was also fined $100,000 and suspended indefinitely.

Miller said NASCAR heard Shiplett tell Custer over the radio “‘I think you’ve got a flat. Checkup, checkup' when he couldn’t see the car to tell if it had a flat.

“Blatantly pulling over and changing the finishing order on the last lap is what makes it over the top,” Miller continued, “especially with the instructions from the pit box.”

SHR was already appealing Harvick's penalties and said Tuesday it would appeal the latest penalties against Custer's team.

Miller said the penalty against Custer's team would have been even stiffer if NASCAR didn't believe Briscoe had earned his spot in the round of eight. NASCAR considered suspending Custer, who is the son of SHR's co-president Joe Custer, but Miller said it didn't because “super flagrant things that eliminated other competitors” are what warrants suspension.

NASCAR also did not consider removing Briscoe from the playoff field, which is down to eight drivers as NASCAR heads to Las Vegas Motor Speedway. NASCAR found no data or communication that indicated Briscoe or the No. 14 team was aware Custer was assisting Briscoe's advancement.

NASCAR cut Miller's availability on the topic at just under 11 minutes, and Miller was not asked if NASCAR considered adding Larson back into the playoff field as a ninth driver.

The precedent for all this dates to a 2013 race manipulation scandal by Michael Waltrip Racing in the final regular-season race. Clint Bowyer was instructed over his radio to itch his arm, and Bowyer's car spun to set in motion a sequence of events in which Ryan Newman did not win the race to earn an automatic playoff berth, and Bowyer teammate Martin Truex Jr. got the final playoff position.

NASCAR ultimately removed Truex from the playoff field in favor of Newman, who was closing in on the victory before the bogus spin by Bowyer. But further NASCAR investigations found manipulation by other teams, as well, and Jeff Gordon was ultimately added to what was then a 12-driver playoff field as an unprecedented 13th driver.

NASCAR also at the time declared a “100%” rule in which all teams were mandated to fully compete or risk serious fines. Tuesday marked the first time the rule has been enforced.

Briscoe heads to Las Vegas ranked eighth in the standings with three races to set the championship four.