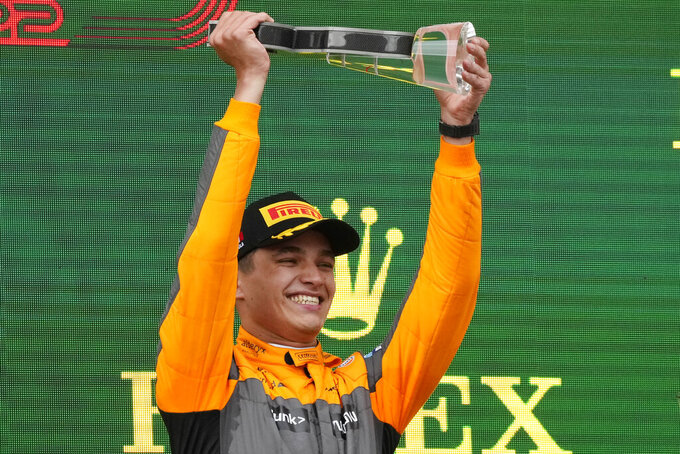 McLaren driver Lando Norris of Britain celebrates on the podium his third place at the Emilia Romagna Formula One Grand Prix, at the Enzo and Dino Ferrari racetrack, in Imola, Italy, Sunday, April 24, 2022. (AP Photo/Luca Bruno)

MIAMI GARDENS, Fla. (AP) — Bruce McLaren was a Kiwi, born and raised in New Zealand. His eponymous Formula One team and high-technology supercar company are based in England.

And yet McLaren very much wants to be North America's official team.

The crowd roared Wednesday night at the Opening Party for the Miami Grand Prix when the Papaya orange — that's the shade, don't get it wrong — appeared on stage. In a city used to superstars and the super wealthy, the spectators seemed to be bouncing at the v ery sight of Lando Norris and Daniel Ricciardo.

Their bosses were there, too, but the inaugural Miami Grand Prix has been built around the star drivers and, wow, does McLaren have a crew. Norris was voted most popular among women in a fan vote and Ricciardo, the Australian who drinks champagne from his shoe after a win, has the biggest personality in the paddock and counts the United States among his favorite countries.

And then there's the IndyCar trio of Pato O'Ward, Felix Rosenqvist and Juan Pablo Montoya, among the first to drive the sprawling course around Hard Rock Stadium when they took laps Wednesday in McLaren road cars.

O'Ward, who turns 23 on Friday, is a Mexican who resides in Texas and IndyCar's most recent race winner. Like Norris, he won his series' favorite driver among female voters. Montoya, part of McLaren's lineup at Indianapolis, is a former McLaren F1 driver and the Colombian was a longtime Miami resident and one of the race ambassadors. Rosenqvist relocated to Indianapolis and the Swede has blended into the community.

It's the IndyCar team that is McLaren's ticket to building a base in sponsor-rich North America, which has finally taken notice of F1, and major companies are scrambling to get involved. It's fertile ground for Zak Brown, the head of McLaren Racing who just happens to be a regular race fan from California.

Brown has had a meteoric rise from owner of an Indianapolis-based marketing firm that dominated the market during NASCAR's halcyon days and pushed Brown to the front of motorsports. He's now the quirky American running the late Bruce McLaren's team his own way.

Brown is a straight shooter who wants to have fun, but takes little credit for McLaren's gains in relevance both on the F1 grid and in fan popularity. McLaren was voted favorite F1 team in a fan survey and Brown said McLaren's image has been cultivated through its drivers and a commitment to spotlighting them through thoughtful social media aimed at the targeted younger demographic.

“The drivers are the right age, right personality,” Brown said. “Pato is a combination of Lando and Daniel. Lando’s quite reserved. Quite witty. Daniel comes dancing into the garage. That’s how Pato is with his presence. Pato has the youthfulness of Lando and the extroverted personality of Daniel.”

“Drivers are a big part of it. I think a lot of credit to our digital and comms teams... what do the fans want to see? It’s the whole reason we went back to papaya in the first place. That’s what the fans wanted. Fans know how important they are to us, and we have a good two-way relationship.”

The quest to capture the market is working, but also not that competitive. F1 has only one team owned by an American — Gene Haas — but the series has no American drivers; McLaren signed 22-year-old Colton Herta, an IndyCar star from California, to a testing contract that begins later this year.

McLaren is using this week, one of a recently unthinkable two U.S. races on this year's F1 calendar, to continue to build its presence. There's a full “SpeedShop” experience that's been billed as “top secret” and “the most immersive (race) experience outside of sneaking into the McLaren garage." The SpeedShop sold out and was offered only to U.S. McLaren fan club members.

At The Wharf in Miami, a customized 2022 McLaren GT is on display all weekend as part of the “Vuse Ultimate Ride” challenge. The car is a collaboration with streetwear brand UNDEFEATED and will be awarded to a fan at the Formula One race in Austin, Texas, in October.

The olive-green car is inspired by the livery designed for the three McLarens in this month's Indianapolis 500 and will go to the winner of a video submission contest answering “how do you drive change?” The challenge asks consumers to describe in 15-30 seconds the impact they make daily in their community.

“While designing new liveries for Vuse and Arrow McLaren is thrilling, having the chance to help celebrate and reward someone who is on the ground putting in the work and giving back is rewarding,” said James Bond, founder of UNDEFEATED.

Brown just wants to give away a McLaren and make another new fan for the team.

“Without the fans, there’s no motorsports,” Brown said.