The Latest: O'Ward nearly goes airborne in crash at Indy 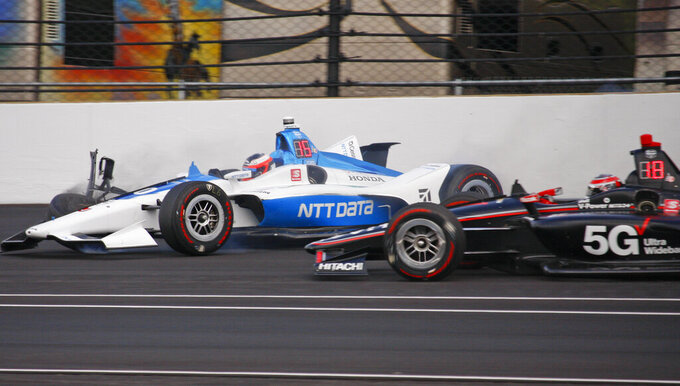 Will Power, of Australia, right, avoids the car driven by Felix Rosenqvist, of Sweden, after Rosenqvist hit the wall in the second turn during practice for the Indianapolis 500 IndyCar auto race at Indianapolis Motor Speedway, Wednesday, May 15, 2019 in Indianapolis. (AP Photo/Mike Fair) 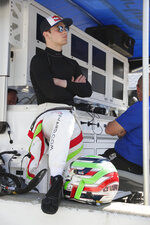 INDIANAPOLIS (AP) — The Latest on Day 3 of practice for the Indianapolis 500: (all times local):

Patricio O'Ward is the third driver to crash during practice for the Indianapolis 500 and the Mexican rookie narrowly avoided flipping his car.

O'Ward spun into the outside wall and his car briefly turned to its side and nearly went airborne Thursday. O'Ward teetered on one wall before the car settled back onto the track surface.

Fernando Alonso and Felix Rosenqvist both crashed in practice this week and both went to backup cars. Rosenqvist was ready to go when Indianapolis Motor Speedway opened Thursday but McLaren was still working on Alonso's car.

O'Ward, Rosenqvist and Colton Herta are the three prominent rookies trying to make the May 26 race and all three have had incidents practicing for the 500. Herta spun but did not crash on opening day. O'Ward also drives for Carlin, which is the technical partner for McLaren's Indy 500 effort.

Felix Rosenqvist has returned to practice for the Indianapolis 500 in a backup car prepared overnight by his Chip Ganassi Racing team.

Rosenqvist crashed his main car Wednesday but his team quickly decided to move to its backup and it had the Swedish rookie ready to get back in the seat when practice began Thursday.

Fernando Alonso, meanwhile, was idling in street clothes as McLaren worked on his spare car. Alonso crashed Wednesday and the team worked until roughly 2 a.m. preparing another car for the Spaniard.

Alonso spent some of his free time chatting with seven-time NASCAR champion Jimmie Johnson, who stopped by before he begins preparing for Saturday night's All-Star race in Charlotte, North Carolina. Johnson was walking up and down pit lane as Day 3 of Indy 500 preparations began trying to say hello to as many IndyCar friends as possible.

McLaren does not expect Alonso to get on track until later Thursday afternoon. The team will use its spare car, the one built by technical partner Carlin, and the car Alonso crashed will become the backup.

Academy Award-winning actors Matt Damon and Christian Bale will wave the green flag as honorary starters for this year's Indianapolis 500.

The 33-car starting grid will be filled in qualifying Saturday and Sunday. The race will be held May 26