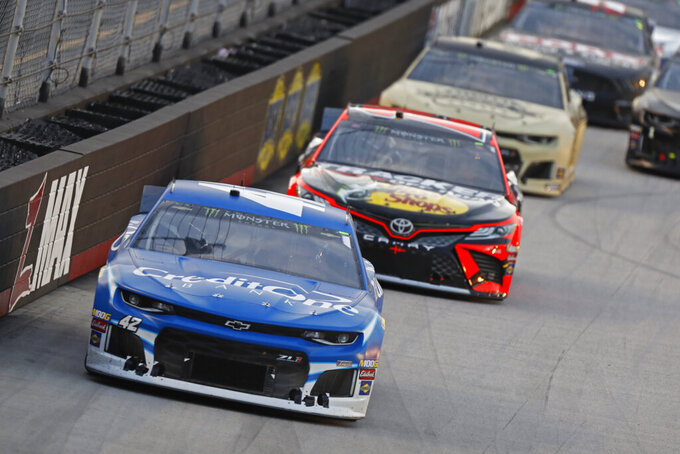 Kyle Larson (42) leads others down the back straight during a NASCAR Cup Series auto race, Saturday, Aug. 17, 2019, in Bristol, Tenn. (AP Photo/Wade Payne)

BRISTOL, Tenn. (AP) — The Latest on the NASCAR race at Bristol Motor Speedway (all times local):

Denny Hamlin has raced to his fourth victory of the season by holding off Matt DiBenedetto at Bristol Motor Speedway.

DiBenedetto finished a career-best second just days after learning Leavine Family Racing would not bring him back for a second season. A win would have earned him an automatic berth into the playoffs.

Instead, Hamlin chased him down in the closing laps to spoil the upset.

Hamlin won from the pole and overcame early damage to his Toyota and a loose wheel to win at Bristol for the second time in his career.

Busch cycled into the lead by not pitting under caution right before the final push to end the stage.

It was a rough stage for Denny Hamlin, who started from the pole but had contact with Jimmie Johnson while leading, then later developed a loose wheel that forced an unscheduled stop. He was 18th at the end of the second stage.

Playoff contender Aric Almirola hit the wall and damaged his Ford when he developed a tire rub. He had to stop to repair the damage and later wrecked again.

Clint Bowyer also took a brief hit in his playoff push when he was turned by Reed Sorenson after passing Sorenson but not leaving enough room before dipping below the lapped the car. The spin happened inches in front of teammate Daniel Suarez but the Stewart-Haas Racing drivers did not make contact.

During the pit stop brought out by Bowyer's spin, Kevin Harvick's transmission broke in what was a rocky sequence of events for the SHR cars.

Kyle Larson has held off Chase Elliott to win the first stage at Bristol Motor Speedway.

The stage victory point is critical for Larson, who is trying to qualify for the playoffs.

The race began as a battle between Larson and Denny Hamlin until a caution 80 laps into the stage. Austin Dillon developed a tire problem and Jimmie Johnson could not slow down fast enough to avoid running into the back of Dillon. As those two cars wiggled, leader Hamlin bounced off of Johnson's car.

Hamlin then had a lengthy pit stop as his crew had to fix the damage. He dropped to 12th on the restart.

Hamlin started from the pole and used both lanes around Bristol to build his lead. Then Larson jumped to the front on a pass from the bottom lane.

Bristol's two lanes are controversial because the preferred upper groove has been cleaned by track officials, while a traction compound has been used to create a stickier second lane.

The upper lane was not cleaned after Friday night's Xfinity Series race at NASCAR's request. But both lanes were usable as Hamlin and Larson raced each other for the lead.

The crowd loudly booed Kyle Busch during driver introductions, and he in turn chugged a substance from a red plastic cup while thanking them for attending the event.

Denny Hamlin has passed pre-race inspection and his car will start on the pole Saturday night at Bristol Motor Speedway.

The Daytona 500 winner gave both Toyota and Joe Gibbs Racing its first pole of the season in qualifying, but the result was not official until after inspection began hours before the race.

Among those on the outside of the top 16 in standings and winless on the season is seven-time champion Jimmie Johnson, who has never missed the playoffs since they began in 2004. He qualified 30th.

Eight-time Bristol winner Kyle Busch had a rough qualifying run and starts 31st. Busch, winner at Bristol in the spring, has only started lower than 31st at this .533-mile concrete bullring three times in 28 career starts.

Drivers and Speedway Motorsports Inc., owner of the race track, are at odds over treatment to the top racing line around the short track.

Hamlin and Busch were among those who claimed the upper groove at Bristol had been "ground or polished" before the weekend. They were critical of the action and took pointed shots at SMI officials for not conferring with teams before altering the surface.

But SMI CEO Marcus Smith struck back and posted on Twitter that there was no grinding to the upper groove and "actually we just cleaned off the upper groove. No grinding. Just excellent racing surface maintenance from our team."