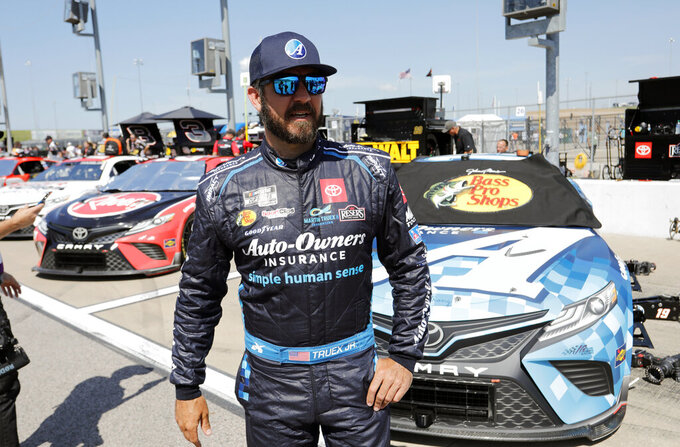 FILE -Martin Truex Jr. stands by his car before practice for a NASCAR Cup Series auto race at Kansas Speedway in Kansas City, Kan., Saturday, May 14, 2022. Martin Truex Jr. won a pole for the first time in his three-plus seasons with Joe Gibbs Racing and will lead the field to green at New Hampshire Motor Speedway. Truex turned a lap of 127.113 mph on Saturday, July 16, 2022 and won his 20th career pole. (AP Photo/Colin E. Braley, File)

LOUDON, N.H. (AP) — Martin Truex Jr. won a pole for the first time in his three-plus seasons with Joe Gibbs Racing and will lead a Toyota-heavy top five to green at New Hampshire Motor Speedway.

“We’ve got a lot of race wins, and those are obviously more important,” Truex said. “You always want to be the fastest guy. We got a small victory today.”

Truex, the 2017 Cup champion, will take any boost he can as he races Sunday for his first win of the season. Truex has 31 career Cup victories and won four times last season and was runner-up in the standings to champion Kyle Larson. But he’s scuffled this season in NASCAR’s new Next Gen stock car over the first 19 starts and posted only two top-five finishes. He hasn’t finished better than 11th in any of his last four races.

Truex is winless in 28 career starts at New Hampshire. With a win, he would earn a spot in NASCAR’s playoffs.

“We’ve been trying really hard to get the first Cup win here,” he said. “We’ve certainly been good enough to win here.”

Truex led a Toyota run that took four of the top-five spots. 23XI Racing took the third and fourth spots with Kurt Busch in the No. 45 and Bubba Wallace in the No. 23, respectively. Truex’s JGR teammate Christopher Bell starts fifth.

“I feel like we’ve just had a few good weeks,” Elliott said. “This is a sport that will humble you really fast, so when you come off of a good week, that doesn’t guarantee the next one is going to go that good again. I’ve been down that road and you just kind of ride the wave. It’s been a good wave and you want to try and ride it the best you can, and make it last as long as possible.”

Truex, who advanced to NASCAR’s title-deciding championship race in four of the past five seasons, and JGR announced in June the driver would return next season in the No. 19 Toyota.

“It’s nice not to have to think about it,” Truex said. “I don’t feel like I ever came to the racetrack thinking about it or was worried. I guess during the week it’s a little more relaxed.”